Various features of a human face collated in different ratios produce a distinct smile and esthetics. Any deflection from the accepted facial development and symmetry brings about vexatious facial appearance, depression and diffidence of patient. So a compendious smile designing is imperfect without scrutinizing the dentofacial features. Tremendous progress in the surgical discipline has made it possible to treat the major dentofacial deformities successfully, for whom orthodontic camouflage and growth modification would have resulted in unstable and displeasing results. Orthognathic surgery is the art and science of diagnosis, treatment planning and implementation of treatment to correct musculoskeletal, dentoosseous and soft tissue deformities of the jaws and orofacial appratus. With bona fide diagnosis and treatment planning, pleasing smile and functionally stable results can be obtained in skeletal class 3 malocclusion. Orthognathic surgery should be flawlessly integrated with orthodontics and other dental treatments to achieve satisfactory outcome. In orthognathic correction of skeletal discrepancies, various treatment modalities should be considered to come up with adequate outcome and least trauma to patient. Due to the meticulous advancement in recent decades, combined approach of orthognathic surgery and orthodontic treatment has been rewarded for severe dentofacial deformities. We are presenting here a case of skeletal class 3 malocclusion with symmetrical mandibular prognathism treated with combination approach.

There are 3 fundamental objectives of orthognathic surgery: functional efficacy, stability and esthetics. Attainment of these objectives form the basis of goals in treatment of dentofacial deformities and need a efficient synchronization.[1, 2] Most severe deformities which needs a combination approach for treatment i.e. surgery and orthodontics are called dentofacial deformities. These deformaties can impact physical orofacial functions in various ways like impaired mastication and digestion, mouth breathing, compromised speech despite adaptive capabilities of body, more incidence of caries and periodontal disease, TMJ disorders. Nevertheless, in particular in a contemporary world, the aesthetic aspect of severe malocclusion can profoundly affect the quality of life and entail life long adjustments.1 The negative psychosocial impact of a dentofacial deformity on an individual is paramount. A beautiful smile raises self-confidence and self-respect of an individual.

There are 3 kinds of treatment for malocclusion caused by severe skeletal discrepancies: growth modification in growing stage, dental compensation for a skeletal deformity or orthodontic camouflage, and combined orthodontic and orthognathic surgery after growth has ceased.2 Last one is considered best treatment modality for severe dentoskeletal deformities where only orthodontic treatment can jeopardize the stability of results. In last few years, number of patients opted for orthognathic surgery has increased due to awareness, advancement in surgical field and desire for esthetically stable results.

A 22-year-old patient presented in our clinic with chief complaint of lack of contact of front upper and lower teeth, speech problems ,excessively progressed lower jaw generating unpleasant facial profile. Both patient and parents were distressed due to his facial look and wanted to correct it.(Figure 1a,b).

During initial examination, we noticed a concave profile, excessive mandibular prognathism, anterior and posterior cross bite, and increased lower facial height, reduced labiomental fold and acute lip-chin-throat angle. The occlusion was not well aligned but mouth opening was normal and no TMJ abnormality observed. The patient had an Angle Class III malocclusion with complete cross bite and reverse over jet (-8mm), reverse over bite (-3 mm). (Figure 2) Mandibular incisors were lingually inclined. Considering the above findings, this patient was diagnosed as an Angle Class III malocclusion with skeletal Class III with reverse overjet, high mandibular plane angle. Patient was advised for OPG and lateral cephalogram for further assessment and treatment planning.(Figure 3, Figure 4) 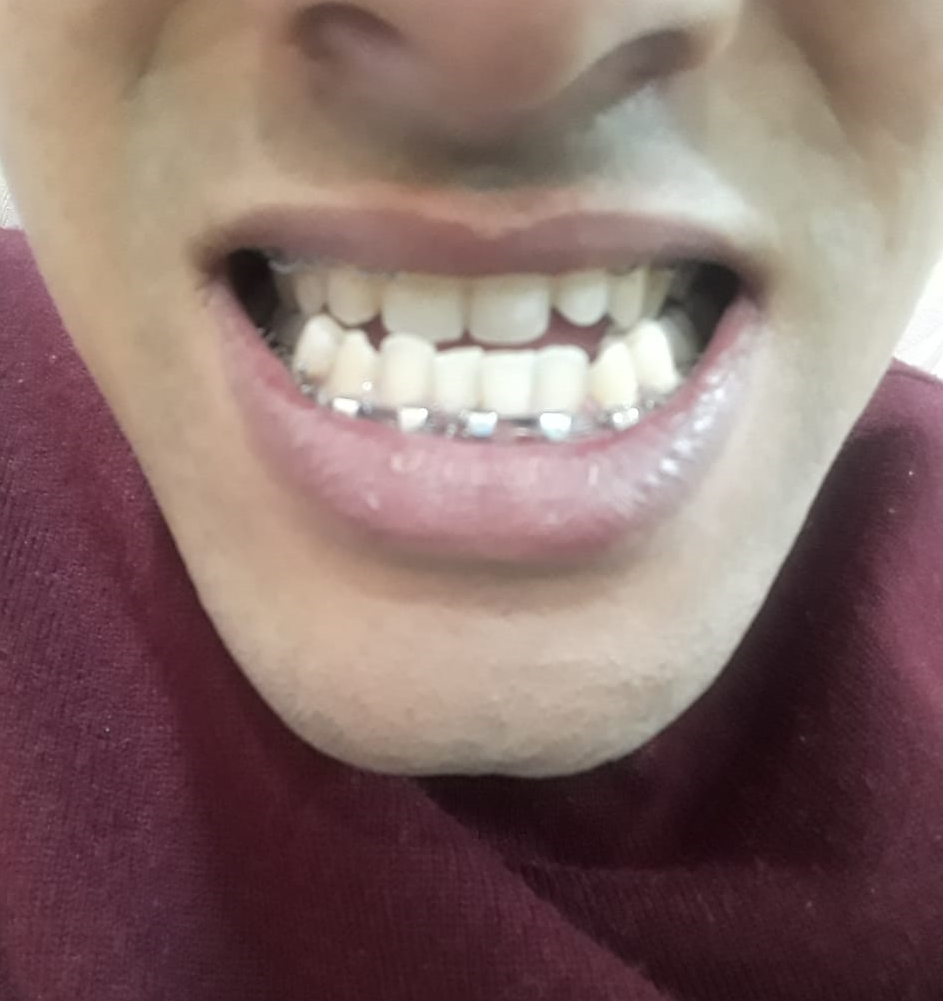 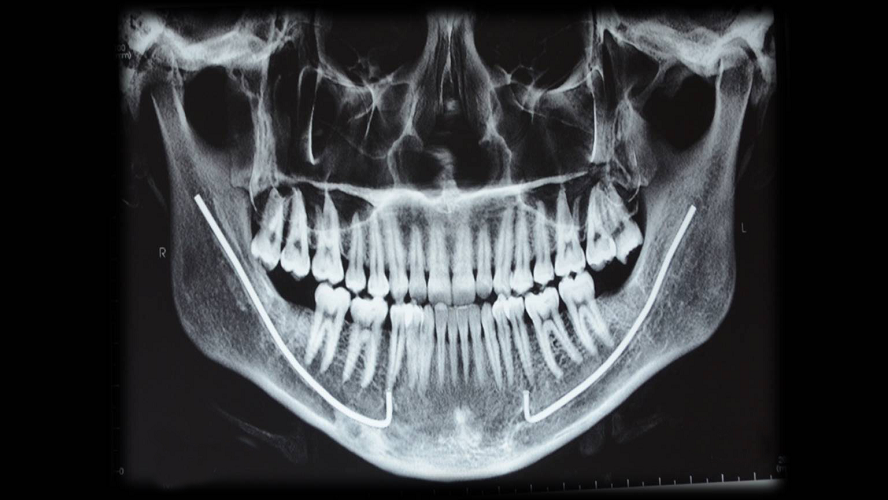 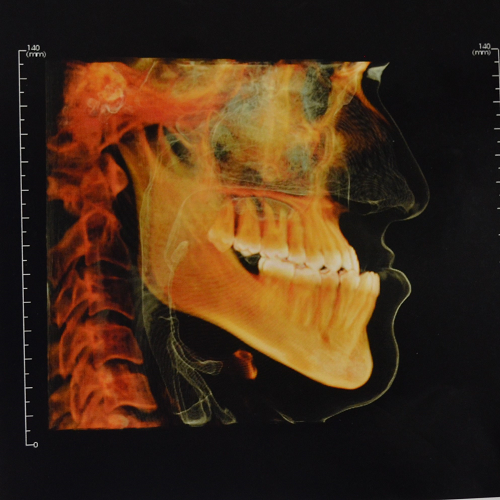 Presurgical orthodontics and surgical Correction was recommended. Edgewise appliance was planned for expansion of the maxillary dental arch, to align and level the upper and lower incisors, and to achieve compatible arch forms, to achieve root paralleling to create space for osteotomy. Basic goal of presurgical orthodontics is to position the teeth upright over basal bone while satisfying the spatial requirements. Thereafter Bilateral Sagittal Split Osteotomy (BSSO) was planned with a pushback & fixation with Titanium Mini Plate fixation to correct the sagittal skeletal discrepancy between the maxilla and mandible.(Figure 5) After satisfactory healing phase, postsurgical orthodontic treatment was planned to establish an ideal occlusal relationship,to close residual spaces and to stabilize the result obtained through the surgery to prevent relapse. 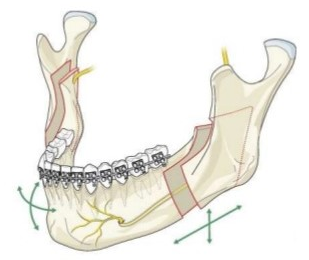 Treatment progress initially, edgewise appliance was placed on the upper and lower arches as presurgical orthodontic procedure. Appropriate anterioposterior and vertical relationship of teeth achieved, along with compatible arch forms and intercanine width to make dental midline visible before surgery. Upper arch was expanded using nitinol arch wire. (0.018 × 0.025 inch. Presurgical orthodontic treatment took almost 12 months. After the completion of presurgical orthodontic treatment, a mandibular pushback with Bilateral Sagittal Split Osteotomy (BSSO) was performed under general anesthesia. We planned for 8mm of push back movement on both the sides. A full-thickness intraoral mucoperios­teal crevicular flap was reflected which uncovered the mental foramen and the inferior border of the mandible but we left a tissue fold attachment at lower alveolar border to anticipate healing on all sides of osteotomy. We gauged the normal route of mental neurovascular bundle, which bulge out anterior to the mental foramina before looping back, to avoid any post surgical complications. Due to the presence of mental foramina within the osteotomy site, we elected to avoid Conventional Dingman’s rectangular osteotomy. Considering the above finding, we decided to go for, a posterior sliding steplad­der osteotomy evolved by Converse & Shapiro’s4 and Sandor’s 2 work which permitted us to preserve the neurovascular bundle from osteotomy lines. Osteotomy was done bilaterally with the help of fissure burs and osteotome. (Figure 6 a,b) The main trunk of the inferior alveolar nerve was left attached to the proximal segment of the mandibular body. After osteotomy, three independently mo­bile segments were there. The anterior segment was reloaceted posteriorly and bilateral posterior segments were brought into maximum occlusion and stability. Fixation was achieved bilaterally with two titanium miniplates of 2 mm with 4 hole plates.(Figure 7) There was no breathing issues postoperatively. The patient was discharged on the third postoperative day and the IMF was released af­ter two weeks of follow up.

a: Placement of incision during BSSO; b: Flap elevation and exposure of surgical area

Post-operative pictures and lateral cephalogram showed immediate improvement in facial profile of patient and occlusion was also improved. (Figure 8, Figure 9) Follow up after 1 week showed satisfactory healing and occlusion.(Figure 10 a,b and Figure 11 a,b) There were no complains by patient in relation to sensitivity or periodontal problems, no neurosensory deficit, no temporomandibular joint disability noticed. ­ Post surgical orthodontic treatment was done to refine occlusion, to establish Angle’s class1 molar occlusion and to stabilize the reoriented oral musculature to prevent relapse, followed by debonding. Retainers were given for the upper and lower arches, for full time. Follow up on monthly visits showed satisfactory results.(Figure 12) The occlusion was stable after 2 years of follow-up and patient was satisfied and happy with the outcome.(Figure 15 a,b) 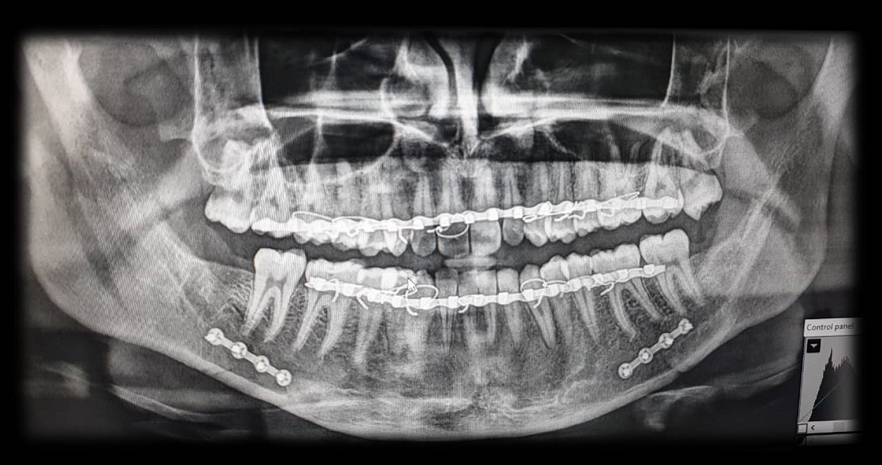 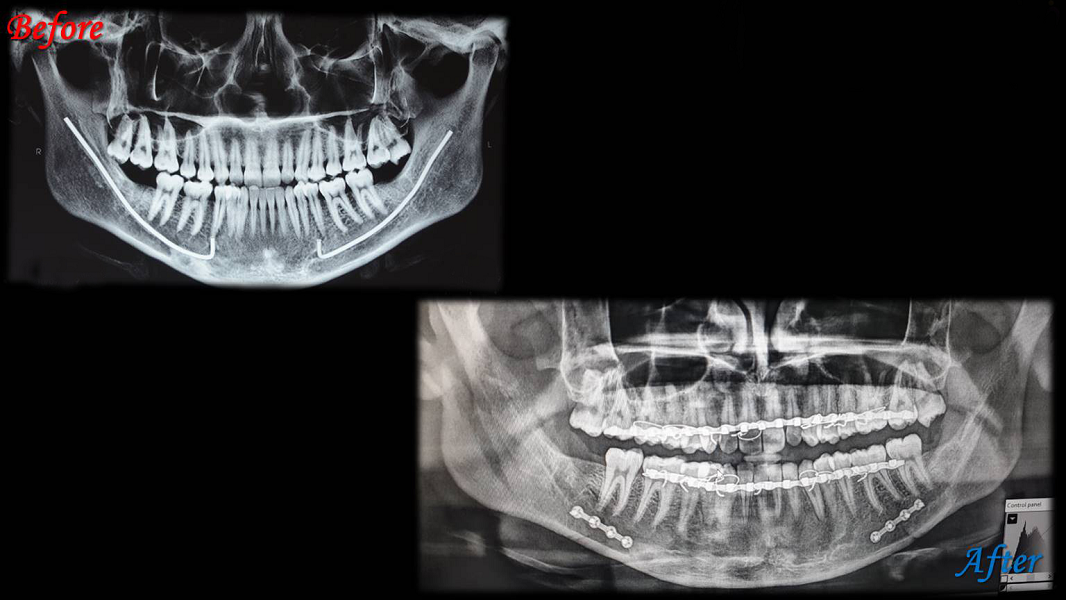 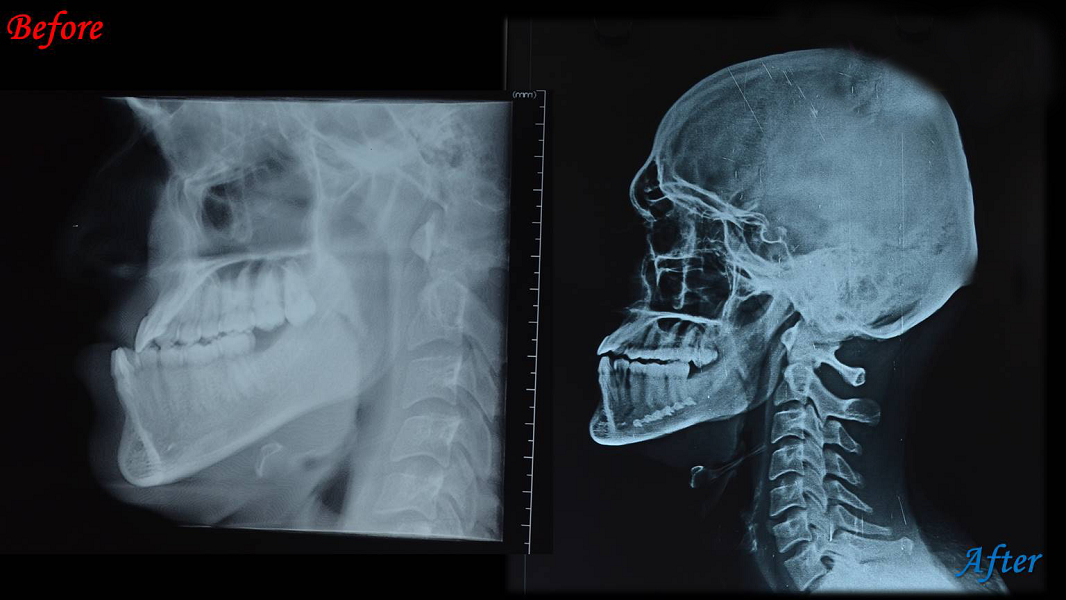 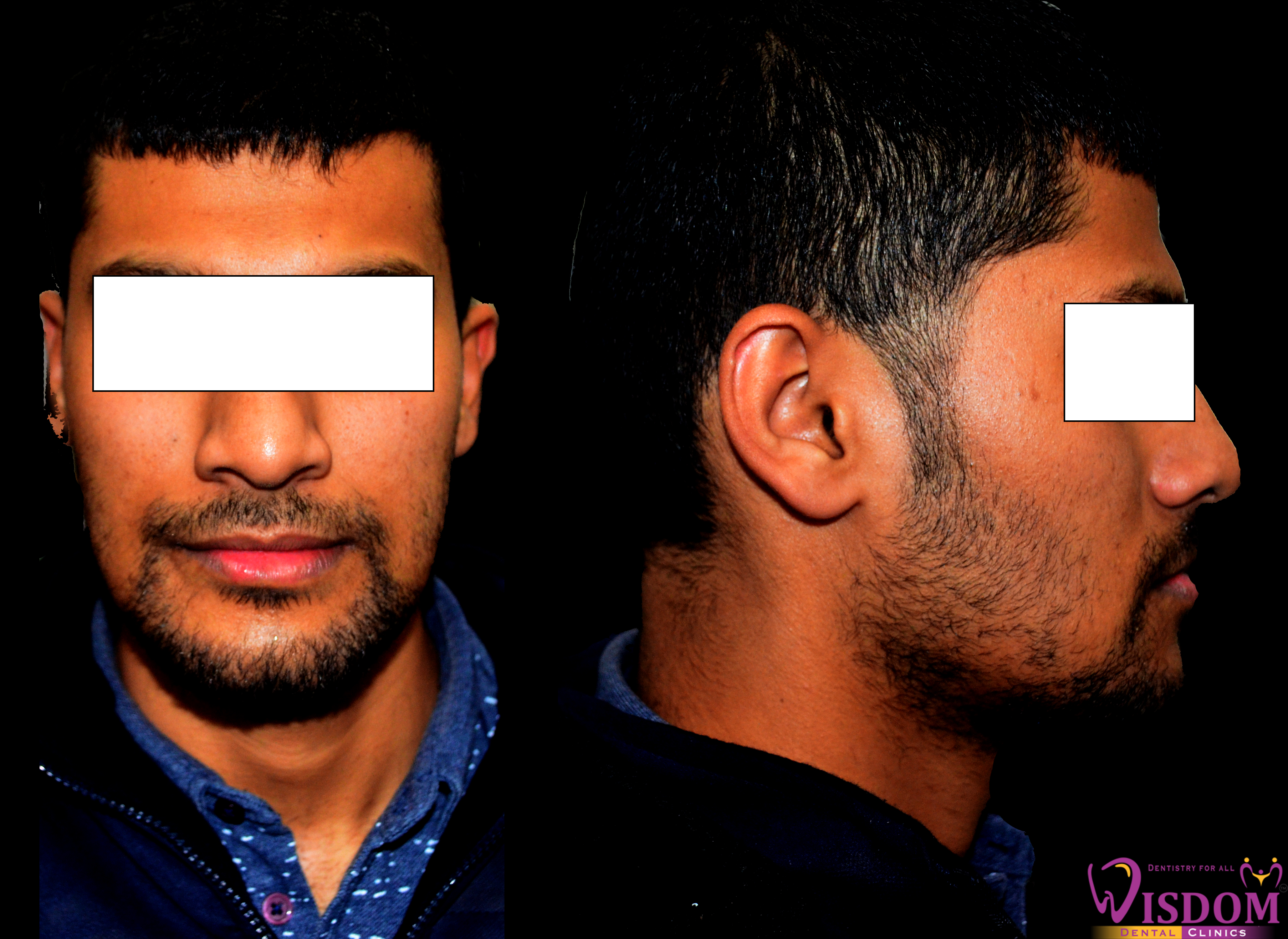 The post treatment records showed a dramatic change in the facial profile and occlusion.(Figure 13, Figure 14) The protruding chin and long lower facial height were reduced, resulting in a straight profile. Adequate overjet and overbite were achieved. Cephalometric evaluation before and after treatment showed an acceptable repositioning of the mandible and sustainable anteroposterior maxillomandibular relationship achieved. Cephalometric changes were evident macroscopically. 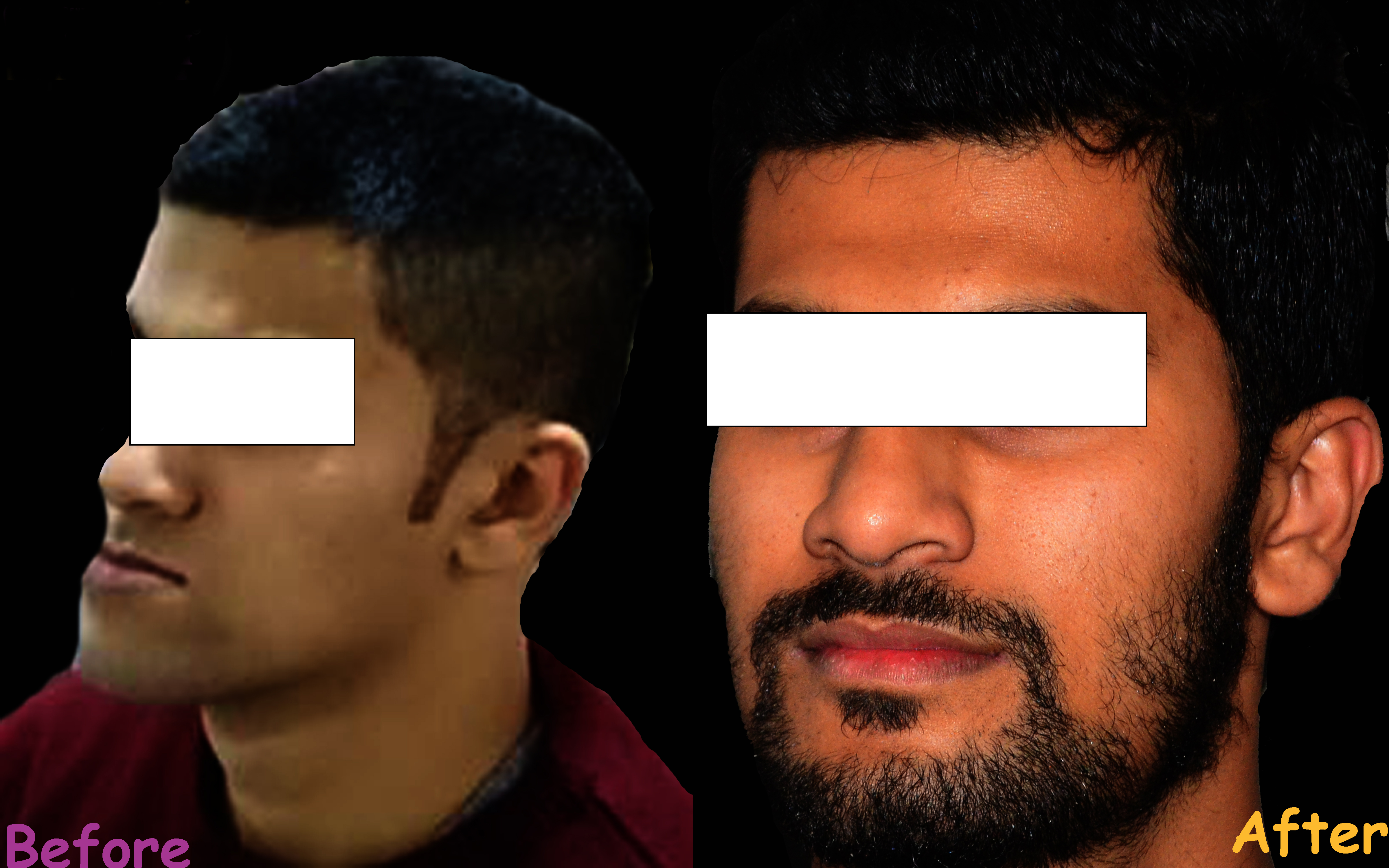 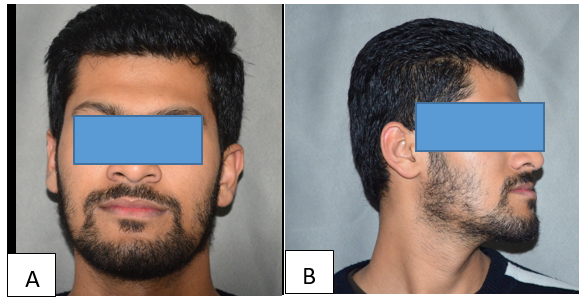 Blair was the first person to describe body osteotomy of the mandible in 1907 but Pichler in 1916 described the first step like osteotomy of the mandible. Earlier these procedures were completely extraoral in which the inferior alveolar neurovascular bundle was compromised. Dingman delineated usefulness of the rectangular body osteotomy with combined intraoral and extraoral two-stage approach.3 In order to preserve the inferior alveolar neurovascular bundle, many modification were proposed like inverted L osteotomy of Trauner and Obwegeser, Converse and Shapiro’s step ladder osteotomy and functionally stable osteosynthesis of Cesteleyn and Boateng.4, 5, 6, 7 In recent years, with the popularity of mandibular Ramal osteotomies, mandibular body osteotomy has been performed less often.

As shown in oue case, if the mental neurovascular bundle is present in osteotomy site then there is a higher risk of inferior alveolar nerve injury.8, 9 It also carries a risk of damage to the roots and periodontal health of teeth involved in osteotomy site, which might require post-surgical endodontic and periodontal treatment of involved teeth. There is also a deficit of sufficient bony contact area for fixation and osteogenesis.10, 9, 11 Complications of inferior alveolar nerve injury can be drastically reduced by creating a bony window to enclose the inferior alveolar neurovascular bundle, by surgical repositioning or by creating enough room for osteotomy in presurgical orthodontic treatment, which also reduces the incidence of root damage and invasion of periodontal spaces of involved teeth.4, 9 We kept the osteotomy lines away from the mental foramen to avoid injury to mental neurovascular bundle.No neurosensory disturbance was noticed after a week of surgery.

Our case showed the improvement of facial esthetics i.e. establishment of a positive ANB angle, reduction of mandibular plane angle toward normal, decreased lower facial height towards normal(55%) and proclination of lower incisors after treatment was clearly noticeable. OPG examination also revealed the same after presurgical orthodontics and Surgery (BSSO). In this case, edgewise appliance was used as a presurgical orthodontic procedure which was very essential to prepare the patient for surgical procedure and to obtain better occlusal relationship after surgical procedure. Therefore, the combination of presurgical orthodontics followed by BSSO is an effective method for treating skeletal Class III malocclusion with mandibular prognathism. It is well-known that tongue size and position can also affect skeletal and dental components, so in some cases macroglossia has been observed as a possible cause of mandibular prognathism, and reduction of tongue mass by surgical modality aids in effective treatment for malocclusion. Surgical orthodontic treatment can change skeletal and soft tissue dentofacial components. It is reasonable that the size of the oral cavity reduces with mandibular pushback surgery and it can infringe the tongue space, even for a normal sized tongue. The resultant comparative increase in tongue pressure in the oral cavity would cause relapse of the position of mandibular incisors after the treatment, resulting in a decrease in overjet and overbite. In our case, the axial inclination of patient’s anterior teeth were slight overcorrected which should take care of some of the tongue pressure.

Presurgical orthodontic treatment followed by Bilateral sagittal split osteotomy with titanium mini plate fixation can be effective for correcting the facial profile and occlusion in skeletal Class III with mandibular prognathism, as shown in our case. Bilateral saggital split osteotomy can be successfully performed for correction of specific dentofacial deformities without interfering with inferior alveolar nerve functions. Speedy neurosensory recovery and minimal manipulation of muscles of mastication and posterior occlusion are trump cards of this technique.