Alam, Bajjad, and Chauhan: RME as an aid to relieve excess crowding: Illustration with a case report

RME as an aid to relieve excess crowding: Illustration with a case report

This case report describes the orthodontic treatment of a 13-year-old female patient who was diagnosed as Angle’s Class I malocclusion, posterior crossbite along with severe space deficiency. The space deficiency of 10 mm was noted in maxillary arch with complete block out of left central incisor, and posterior crossbite. The treatment plan presented non-extraction with rapid maxillary expansion. A bonded hyrax expander was used in a rhythm of 2 turns/day for 3 weeks, stabilized for 3 weeks, later followed by fixed appliance therapy on a 0.022 x 0.028 inch PEA on MBT prescription. The case was treated as non extraction. The treatment resulted in aesthetically pleasing facial profile with a normal overjet and overbite, and functional occlusion.

Rapid maxillary expansion (RME) is a common procedure which has been used for more than a century to correct maxillary transverse deficiency. The earliest common cited report is that of E.C. Angell published in Dental Cosmos in 1860.1 Adkins et al. have demonstrated that expansion of 1 mm in trans-palatal width increases arch perimeter by 0.7mm.2 In 2003, McNamara et al. evaluated the short- and long-term changes in dental arch dimensions in patients treated with RME followed by fixed edgewise appliances; they concluded that a net gain of 6 mm was achieved in the maxillary arch perimeters as compared to the untreated controls.3 As a result, RME is a viable option to correct transverse discrepancies and create additional space in the dental arch, which offers the possibility of non-extraction treatment selection. Clinical indications for rapid maxillary expansion are a lateral crossbite or a constricted maxillary arch, wide buccal corridors- the negative space, etc. In addition, the increase in arch length allows for reducing the lack of space for crowded teeth.4 Arch expansion not only prevents the detrimental effect of improperly planned extractions on facial aesthetics but also facilitates the complete development of the dental arch, thus allowing the teeth to be orthodontically repositioned within the enhanced alveolar processes and eliminating the need for the removal of permanent teeth in many cases.5

This paper presents a case of a 13-year-old female patient who was treated with Rapid Maxillary Expansion using a bonded hyrax appliance, to correct posterior crossbite and to gain arch length to relieve severe crowding, the case was thus treated successfully as non-extraction.

A 13-year-old female patient reported to the department with the chief complain of irregularly placed teeth in the upper dentition.

Treatment Progress: Maxillary expansion was initiated with the use of a tooth-borne Hyrax assembly (Figure 4). The patient was instructed to activate the appliance once a day for 21 days, as the semi-RME protocol was followed, which involved activation of the screw by two-quarter turns per day for the first week, followed by one-quarter turn per day every other day for the next 2 weeks. Once sufficient expansion had been achieved with the buccal crest of the palatal cusps of the upper posterior teeth just approximating the lingual crest of the buccal cusps of the lower permanent molars, the screw was locked, and the expander served as a stabilizer for the next 3 months. 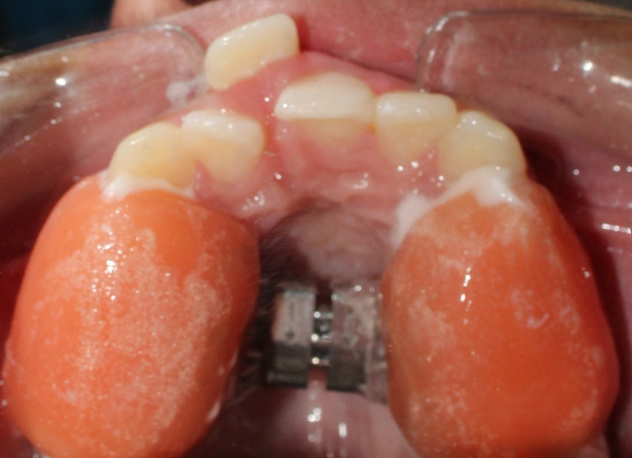 The lower arch was bonded with 0.022” × 0.028” slot pre-adjusted edgewise brackets (MBT prescription). A normal progression of continuous archwires was used to level, align, and coordinate the arches (Figure 8). Settling was performed with double intra oral elastics to obtain intercuspation (Figure 9).

After a total 24 months of treatment, satisfactory dental alignment and acceptable overjet and overbite were achieved (Figure 10). Upon debonding it was observed that the lower left lateral incisor was slightly rotated in the mesil direction, hence a 0.016 inch NiTi active retainer (Figure 11) was bonded in the lower arch to facilitate its correction and a fixed retainer were placed in maxillary arch to maintain tooth positions. Also, gingivectomy was performed in relation to 11 (Figure 12). 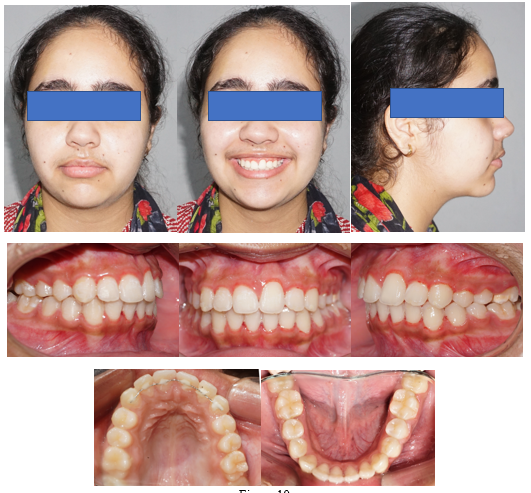 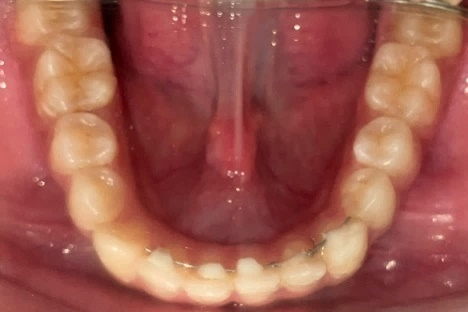 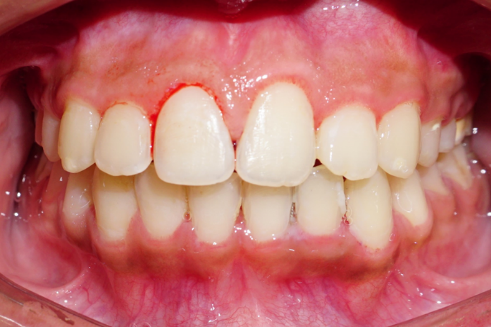 The final radiographs indicated root parallelism, proper root alignment, and no obvious root resorption (Figure 13). Post treatment cephalometric readings (Table 2) indicated improvememt in incisor angulations, and positions of upper and lower lips in relation to S line. Superimposition of cephalometric tracings (Figure 14) indicated that the sagittal relationship of basal bone was generally maintained, with slightly downward and backward rotation of the mandibular basal bone, which led to an increase in the mandibular plane angle by 1˚. 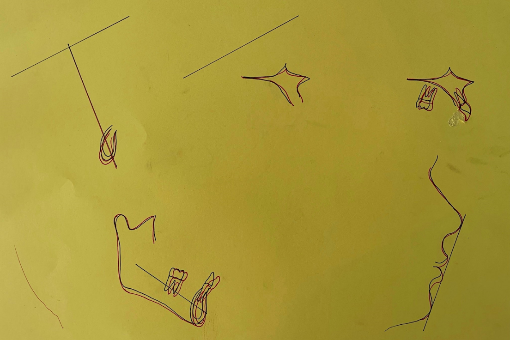 From the above studies, we can assure the treatment efficiency of RME in increasing inter-molar width and arch perimeter. Numerous factors such as soft-tissue profile, health of oral tissues, inclination of the posterior teeth, and individual growth potential, should be taken into consideration when making treatment decision for RME. Arch expansion not only prevents the detrimental effect of improperly planned extractions on facial esthetics but also facilitates the complete development of the dental arch, thus allowing the teeth to be orthodontically repositioned within the enhanced alveolar processes, and eliminating the need for the removal of permanent teeth in many cases.7 A transpalatal width of 35–39 mm suggests adequate size of bony base to accommodate average-sized permanent teeth.8 In this case, the patient had a posterior crossbie, a clear indication for expansion therapy, therefore a hyrax expander was used to take advantage of its dental effect. After 3 weeks expasion and a stabilisation period of 3 months, a significant correction of posterior crossbite was observed. The second phase of treatment involving fixed appliance therapy, with the help of open coil spring, gained sufficient space for proper alignment of the teeth resulting in a non extraction treatment in present of excess crowding. Post treatment results clearly justify the need for expansion in this case where proper inclination of posterior teeth was achieved with correction of posterior cross bite, as well as increase in arch length, and the case successfully completed as a non extraction case.

Upon debond, it was observed that the lower left lateral incisor was slightly tipped in the mesial in direction, hence an active NiTi fixed retainer was placed in the lower arch for its correction. A resilient nickeltitanium (NiTi) archwire is an excellent alternative to stainless steel multi-stranded or plain archwire for use as a bonded lingual retainer or as an active appliance for solving relapse of mandibular anterior crowding without brackets. The technique involves bonding a segment of mandibular NiTi archwire lingually canine to canine to solve relapse of mandibular anterior crowding and to serve as a post-treatment bonded lingual retainer.9 The NiTi wire, in this case was successful in correcting the position of the lower left lateral incisor in a duration of 2 weeks, when the patient was seen in follow up visit. The NiTi wire was then left in place to serve as a retainer.

In this case report, a 13-year old female patient who was diagnosed as Angle’s Class I malocclusion, presence of posterior cross bite, severe space deficiency was successfully treated as non extraction utilising RME on a bonded hyrax. Although there are extreme chances of ossification of mid palatal suture by this age, still dentoalveolar expansion resulted in positive treatment outcomes. Also, a lingually bonded fixed retainer of 0.016-inch NiTi, which served as an active retainer, was successful in correcting the mesial in rotation on lower left lateral incisor.