Edward H Angle first gave the classification for malocclusions into Classes I, II and III. Amongst these, Class II is the most prevalent and commonly treated at orthodontic clinics. Treatment of Class II malocclusion with mandibular deficiency in adult patients is usually managed with ortho-surgical treatment modality. In this article a case of Skeletal Class II malocclusion with vertical growth pattern is represented which was treated with BSSRO and mandibular advancement was carried out.

Smile is the most recognized expression in the world and is the cornerstone of social interaction. A smile is defined as pleasant when the upper teeth and approximately 1 mm gum tissue are exposed.1 Gum tissue exposure > 3 mm is generally not considered as attractive.2 Excessive gingival display or gummy smile, as commonly described, poses an aesthetic problem and makes a person conscious of his/her smile. Insufficient tooth display in low-angle cases (horizontal growth pattern) during smiling also results in poor aesthetics. Such conditions occur as a result of interplay of several etiological factors such as skeletal vertical maxillary excess/deficiency, incomplete gingival descent (passive eruption), hypermobility of the upper lip, short upper lip and excessive horizontal or vertical growth pattern.3 Therefore, it is essential to analyse several aspects such as symmetry of lips and face during smile, level of the gingival margins, smile line, skeletal proportions, to arrive at an accurate treatment plan. In vertical maxillary excess, clinically recognizable smile features are manifested by a gummy smile, complete exposure of the maxillary incisors at rest, incompetent lips, increased lower facial height, and high mandibular plane angle. The orthosurgical correction of vertical maxillary excess should be on a treatment plan based on skeletal stability and aesthetic soft tissue changes.4, 5 In severe horizontally growing cases, especially Class II division 2 malocclusions, reduced lower anterior facial height, insufficient incisor display, deep bite, and a retruded mandible with a backward path of closure is seen. In adults, such cases need to be managed by advancing the mandible sagittally and vertically either with a fixed functional appliance or surgically, depending on the severity of the problem.6, 7 Significant jaw discrepancies render people less attractive leading to their nonacceptance socially.8 This case report describes the combined orthodontic and surgical approach in the treatment of Skeletal Class II case with vertical growth pattern.

A 17 years old male patient reported to the Dept. of Orthodontics with a chief complaint of backwardly tilted upper front teeth and excessive gum display while smiling. He also complained of a smaller lower jaw. On extra-oral examination, a leptoproscopic face having a convex profile with incompetent lips and an inter-labial gap of 5 mm at rest were seen. Patient’s lower lip appeared everted with hyper active mentalis muscle tone and a deep mento-labial sulcus, along with excessive gingival display of approximately 3mm. On comparison of the vertical thirds of the patient the lower anterior facial height was greater than the other thirds. Intra-oral examination revealed a Class II molar on right and left side with Class II canine relationship bilaterally. Patient had moderate spacing between the upper central and lateral incisors. The lower incisors were flared labially. Patient had an overjet of 1mm and overbite of 6mm. The lower midline was shifted towards the right (Figure 1). Ortho-Pantomograph (Figure 2) showed a complete compliment of permanent dentition with maxillary and mandibular third molars in Nola’s stage VII of eruption. Cephalometric evaluation (Table 1) revealed a Skeletal Class II base with a ortho-gnathic maxilla and an retro-gnathic mandible with a vertical growth pattern. Maxillary incisors were retroclined on the basal bone. The mandibular incisors were flared labially. The distance of the maxillary incisors from the palatal plane was increased suggesting over-eruption of the maxillary incisors leading to anterior maxillary excess. The inclination angle was increased suggesting a counter clockwise rotation of the maxilla in turn suggesting posterior maxillary excess; thus, confirming overall vertical maxillary excess and retrognathic mandible. 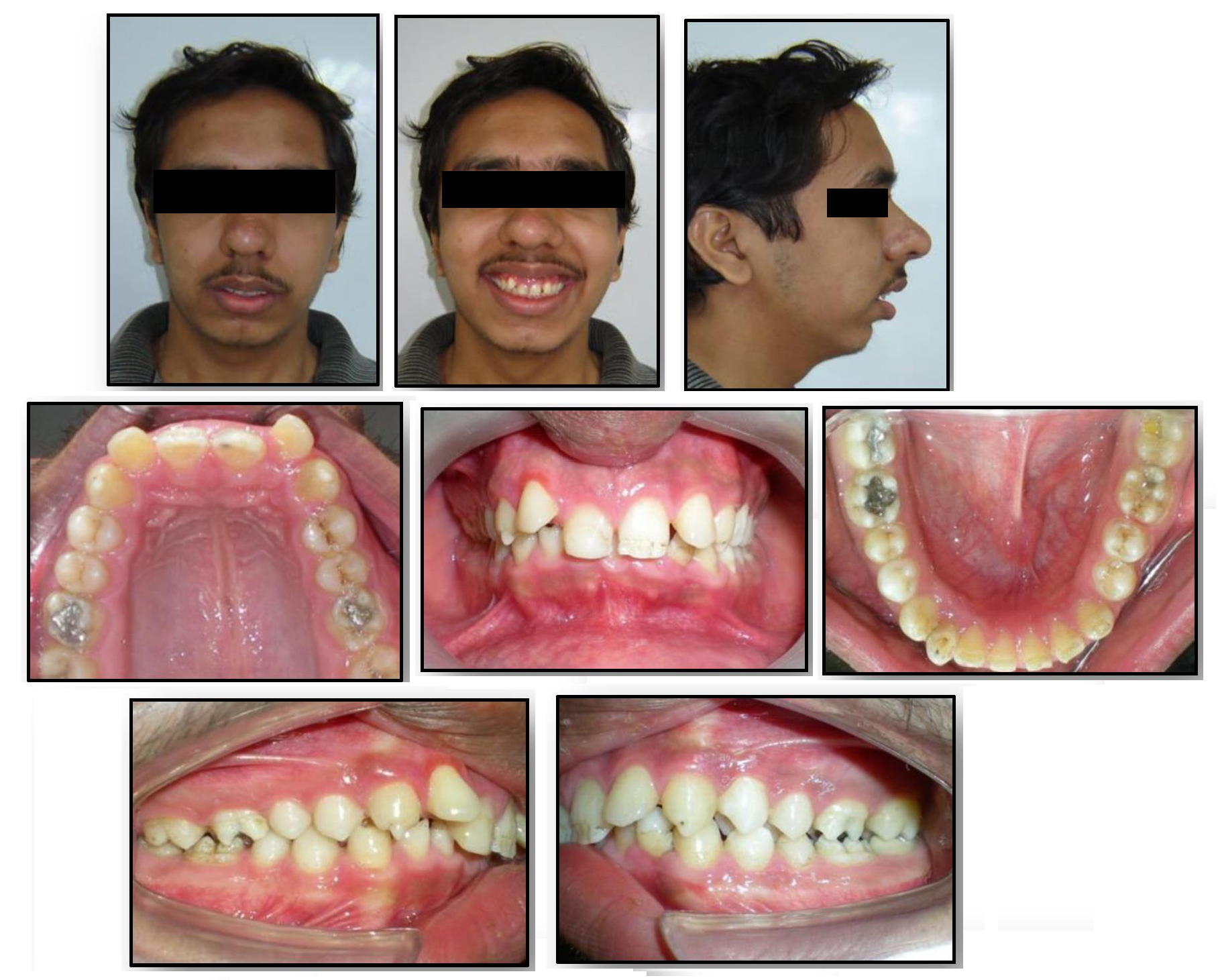 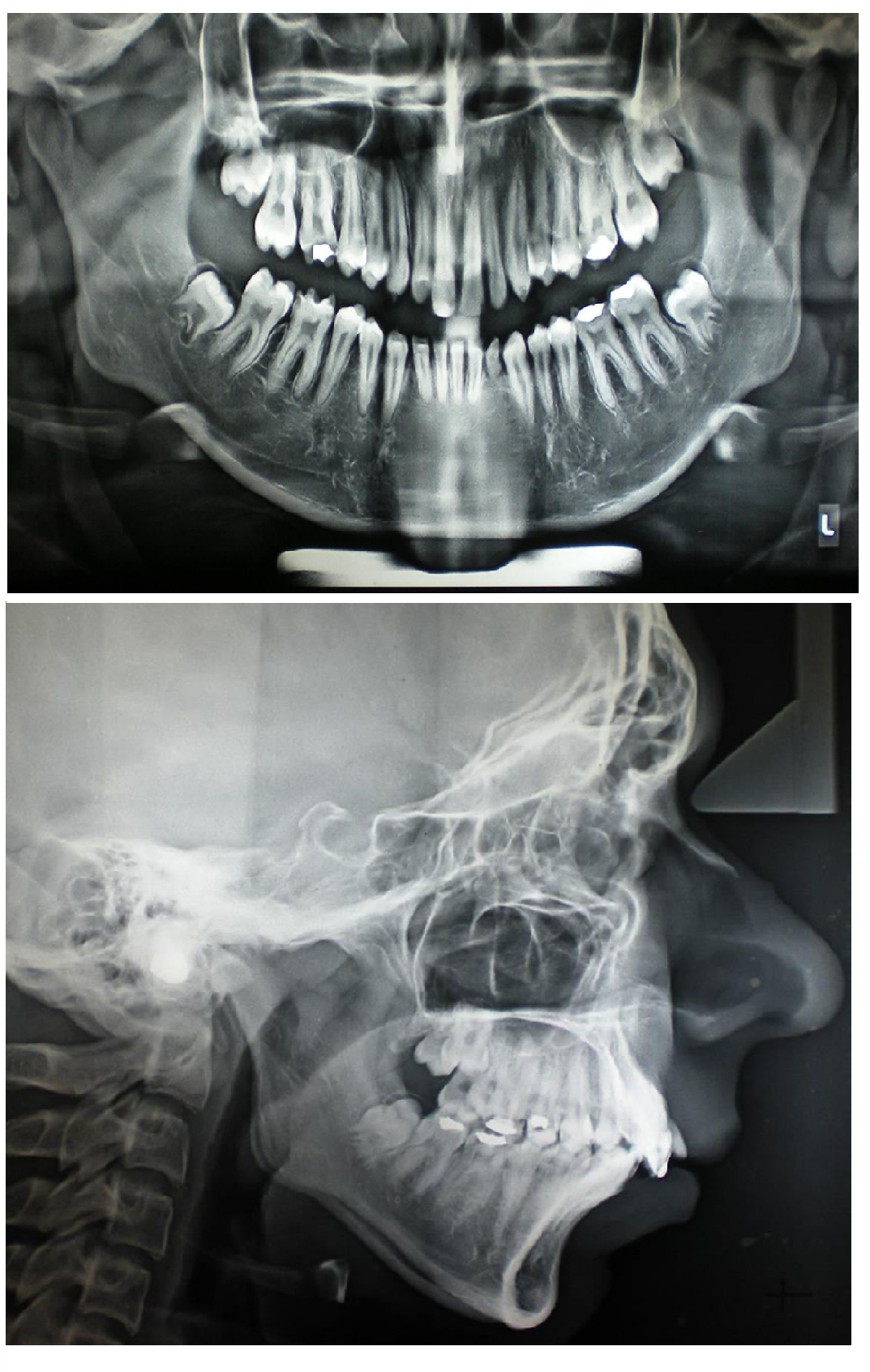 Two alternative treatment plans were discussed which include the following:

Conventional ortho-surgical treatment plan with initial alignment of the maxillary and mandibular incisors followed by surgical correction of the overjet and overbite by mandibular advancement. With this treatment plan maximum treatment objectives could be achieved.

Intrusion of maxillary anterior teeth with skeletal anchorage devices after initial levelling and alignment. This was to be followed by fixed functional appliances for the correction of underlying skeletal discrepancy.9

As the maximum treatment objectives were being achieved with Plan 1, it was decided to go ahead with the same.

After achievement of required alignment of maxillary anteriors, bonding of mandibular teeth was carried out. The lower curve of spee was levelled pre surgically. Dental objectives were achieved in a due course of 12 months (Figure 3). After achievement of dental objectives patient had an overjet of 8mm (Figure 4). Surgical treatment objective (Figure 5) was done and a 7-mm mandibular advancement was planned.

Dental corrections at the end of 12 months 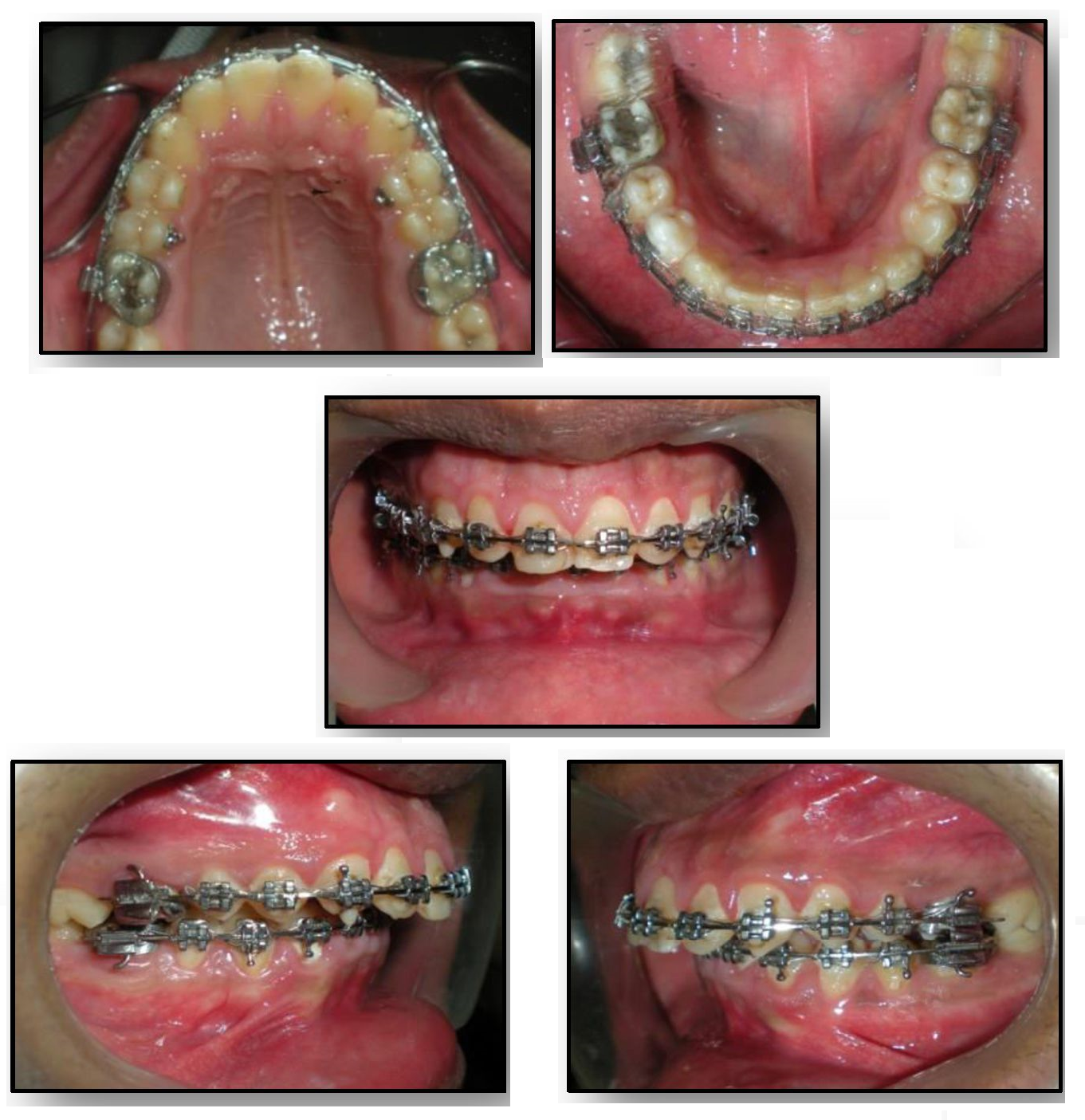 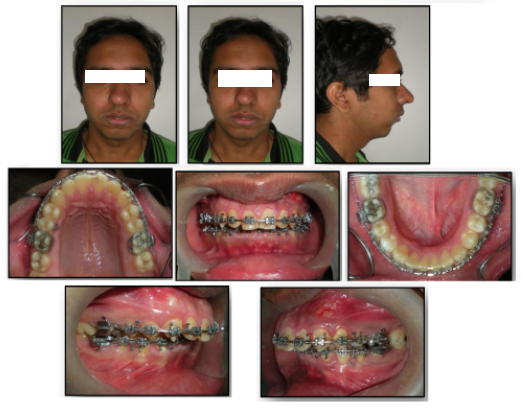 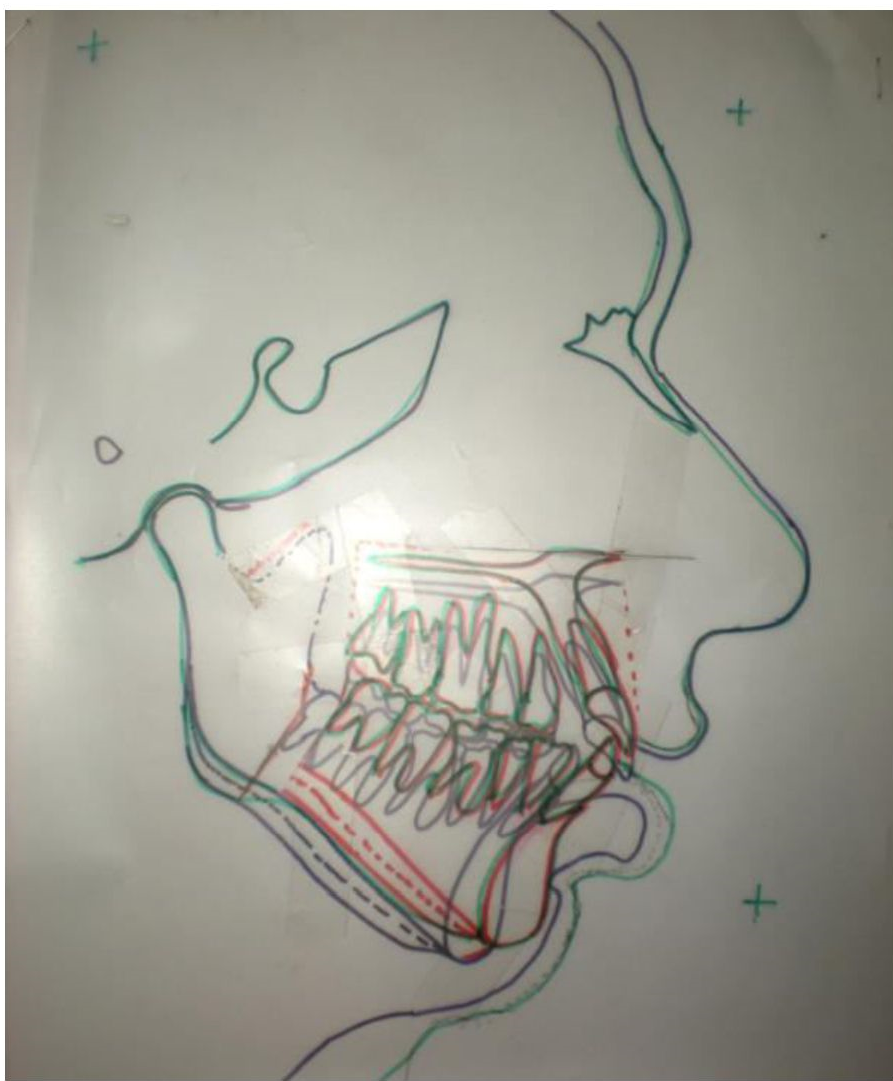 To orient the maxillary cast along the patients cranial base a face bow transfer was done and models were mounted on a semi-adjustable Hanau articulator. Mock surgery was done and the mandible was advanced downward and forward by 7 mm. A surgical splint was fabricated for guidance of the surgeon during surgery to accurately position the mandible according to the plan (Figure 6). Surgical advancement of 7mm was performed by using BSSRO technique and rigid fixation was done using mini plates with the help of surgical splint fabricated during mock model surgery (Figure 7).

Post-surgical lateral open bite (Figure 8) was settled by guiding elastics. Occlusal inter-digitation was achieved in 9 weeks. Upper removable and lower fixed retainers were given and the brackets were removed. Post treatment records including radiographs were taken along with cephalometric analysis which was compared with the pre-treatment analysis (Table 1), (Figure 9, Figure 10). 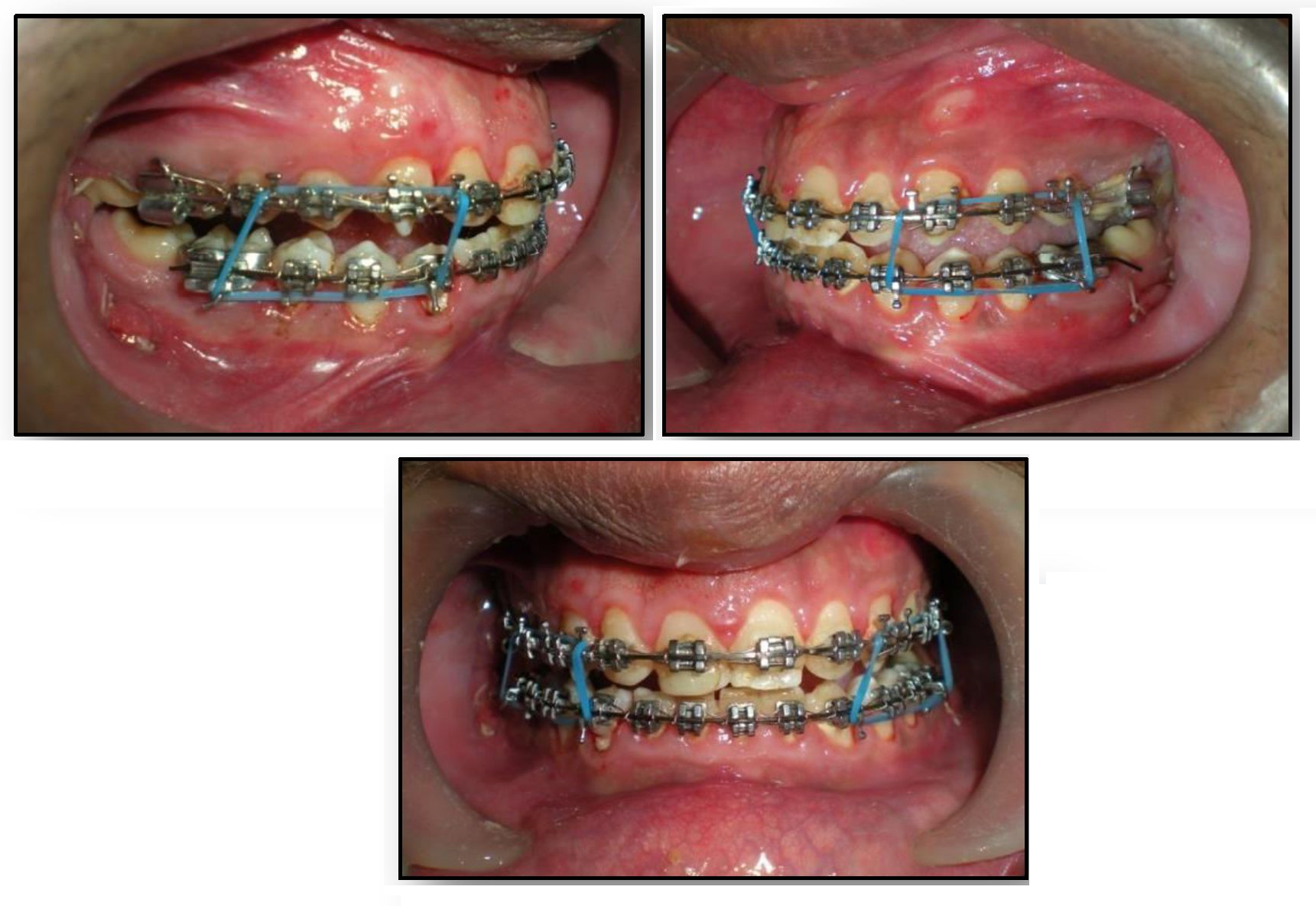 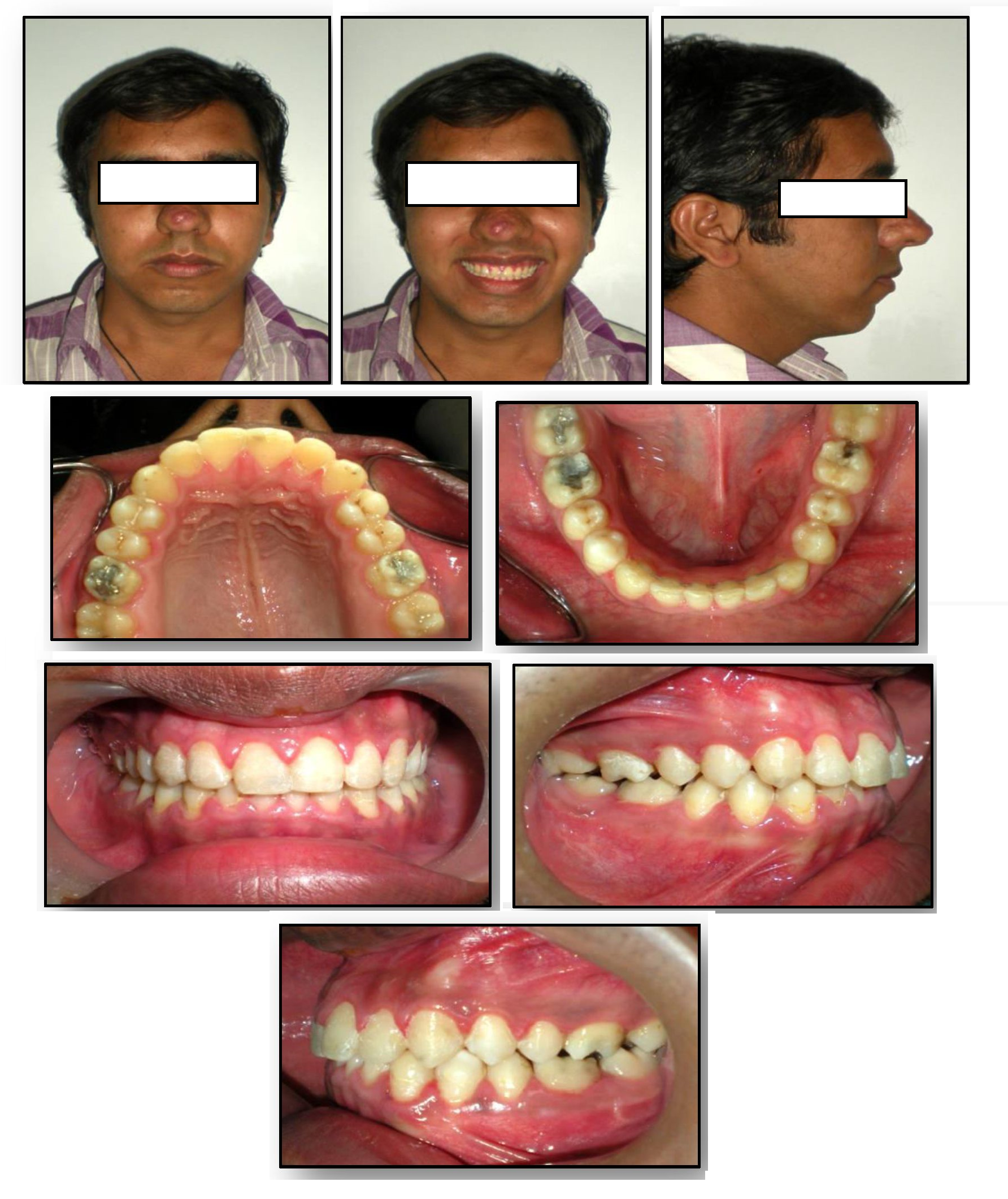 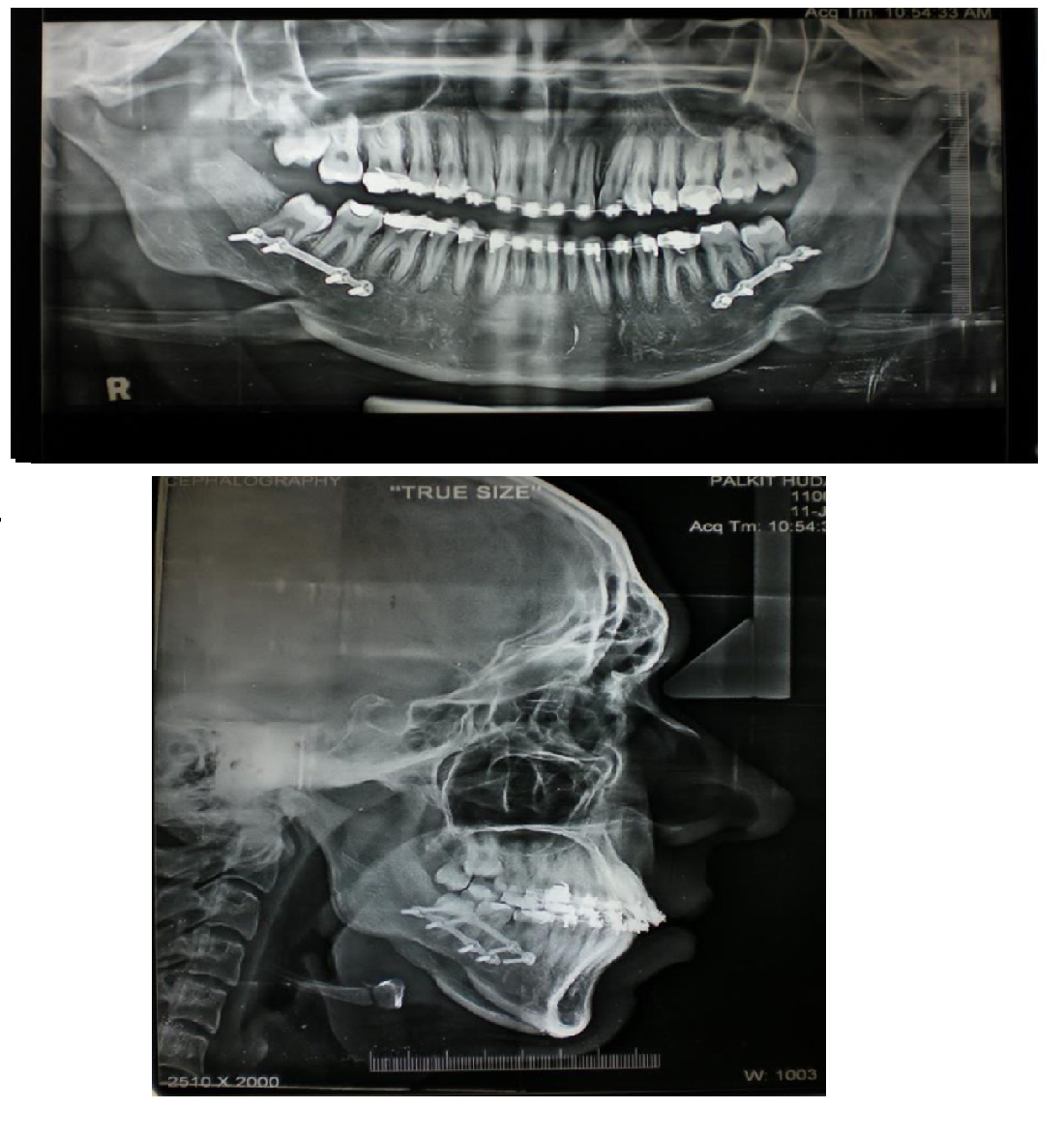 In facial analysis, the vertical maxillary excess has the following characteristics: elongated lower third of the face, relative to the upper and middle thirds; exaggerated display of upper incisors at rest; lip incompetence; tendency of class II malocclusion, with or without open bite and marked gummy smile. The nose is elongated, the alar bases are narrow and the zygomatic region is generally flat. The long lower face, results in a retrognathic appearance of the jaw. Clinically, VME is categorized according to the presence or absence of anterior open bite.10

In this case the treatment protocol adopted is the non-extraction treatment modality with surgical mandibular advancement for the correction of underlying mandibular hypoplasia. In the above case maxilla was normal both in sagittal as well as in the transverse plane, but the mandible was deficient in the sagittal plane with increased vertical vector. As the patient was in CVMI stage 6 with completed skeletal maturity, an ortho-surgical treatment was best suited to achieve the desired treatment objectives

The treatment objective was to improve the hard and soft tissue profile. After initial levelling, alignment and correction of upper retroclined incisors, intrusion of the maxillary incisors was carried out using orthodontic implants(TAD’s). Intrusion of maxillary incisors via TAD’s resulted in achievement of a flat occlusal plane and also improved the lip to incisor relationship. After surgical advancement of the mandible, the posterior open bite was managed by supra-eruption of posterior teeth with the help of guiding elastics to achieve complete intercuspation. The convex profile and deep mento-labial sulcus were also corrected with surgical mandibular advancement.

Treatment of Skeletal Class II malocclusion can be orthodontically handled through a variety of treatment protocols. However, if a severe skeletal discrepancy is associated with vertical growth pattern, a combined orthodontic-surgical approach, as presented in this case, will provide a better aesthetic result for the patient.

WH Bell JJ Dann Correction of dentofacial deformities by surgery in the anterior part of the jaws: a study of stability and soft tissue changesAm J Orthod Dentofacial Orthop197364216287