Settings and Design: All CBCT scans of study subjects belong to Bangalore population were collected from the pre-existing data available in Radiology imaging Solutions (CBCT centre), Bangalore during the period of September 10th to October 10th 2020. This is a descriptive study.

Materials and Methods: A total of 42 subjects including 21 Males and 21 females were assessed using full skull CBCT scans which were converted to DICOM format and reconstructed into 3D images using NEMOCEPH 3D software. Landmarks used to locate the malar prominence were Fzs, Z, Zm and Ans. The intersection of these landmarks is considered to be as constructed maxillozygion(My). For the accuracy of the constructed Maxillozygion point (My), the distance between the actual Maxillozygion (Mzy) and constructed Maxillozygion (My) is measured and calculated between left and right halves of males and females. Three Orthogonal planes constructed were Midsagittal, Axial and Coronal Planes and the linear measurements with reference to all three reference planes in both the groups are measured.

Results: The mean distance from Mzy and my between right and left half of the face was compared using student paired t- Test. There is no significant difference (p=0.35).

The mean values of the constructed anatomical landmark (maxillozygion) coordinated to three orthogonal planes between right and left sides of the face is compared using student paired T test and for both the genders (males and females) was compared using Independent Student t Test, and it is significantly higher in males as compared to females and it is statistically significant at (p=0.01).

Conclusions: The location of malar prominence using CBCT by a novel method for Bangalore population is found which can be helpful in diagnosis and treatment planning for malar augmentation, camouflage treatment in subjects with midface deficiencies.

Orthodontists are concerned with establishing balance in facial profile and occlusion1 of which midface is considered to be of prime importance. Shape of the lateral segment of the middle third of the face is defined by malar prominence.2 Malar prominence differs among various ethnic groups3 and also gender dimorphism exists.4 Many traditional techniques for evaluation of malar symmetry, by palpation, photometry, or cephalometry was done. A major drawback of these techniques is that 2D lines are used to locate a 3D structure.5 In this study, we describe a novel method to locate the malar eminence using 3D-CBCT which will be helpful in orthodontic diagnosis and treatment planning for malar augmentation, camouflage treatment in subjects with midface deficiencies.

All scans were obtained from CBCT (J MORITA 3D Accuitomo, Kyoto, Japan) 170, 4th generation, Voxel size 80 um, Field of view (FOV): 170 X 120mm according to the inclusion criteria. The scans were converted into DICOM format data, which will be then reconstructed into 3D images using NEMOCEPH 3D software.

The most reliable landmark as described by Nechala et al.6, 7, 8 is termed as MAXILLOZYGION is the landmark taken to assess the malar prominence in 3 different spatial planes by using other different identified landmark which include FZS-frontozygomatic suture (the most anterior point of the frontozygomatic suture on the orbital rim), Z-the zygion (the most lateral point on the zygomatic arch), ANS-anterior nasal spine (the anterior tip of the sharp bony process of maxilla), ZM- zygomaxillare anterior (lowest point on the zygomaxillary suture) as seen in Figure 1. 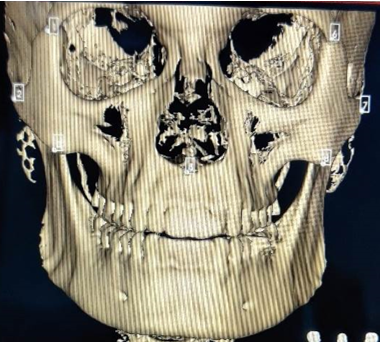 The intersection point formed by Z-zygion, ANS-anterior nasal spine and FZS-frontozygomatic suture, ZM- zygomaxillare anterior is considered to be the constructed Maxillozygion point in this study[my] as shown in Figure 2. 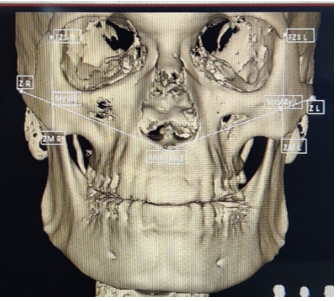 The actual Maxillozygion[mzy] is localized at the most prominent point on the maxillozygomatic suture line below the lateral third of the bony orbit as described by SAMI P. et al6, 7, 9 in their study as shown in Figure 3 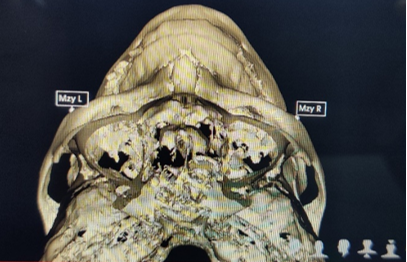 In the second part of the study Specific stable skeletal landmarks are taken. Using these landmarks, a patient-oriented axis system is centered to construct 3 different reference planes (X, Y, Z).

In the present study there was an equal distribution of males and females with 50% [n=21] were been considered. In the Table 1, the mean values of the constructed anatomical landmark (maxillozygion) coordinated to X,Y,Z planes between right and left sides of the face is compared using student paired T test.

There is no statistically significant differences in the point coordinates of midsagittal(X), Axial(Y) and Coronal(Z) plane for the right and left half of the face.

In the Table 3, the mean values of the constructed anatomical landmark (maxillozygion) coordinated to Mid sagittal(X), Axial(Y) and Coronal(Z) planes for both the genders (males and females) was compared using Independent Student t Test.

The goal of any orthodontic treatment should include all the three aspects of jackson’s triad, like 1) structural balance, 2) functional efficiency 3) esthetic harmony.10 In recent years, esthetics has become the primary consideration for the patients seeking orthodontic treatment. Planning the treatment goals in order to achieve this aspect of structural balance should be of prime concern.

A combination of clinical and radiographic examinations is necessary to successfully diagnose and plan the treatment for any malocclusion and dentofacial deformity. Traditionally, many two-dimensional techniques were used to perform analysis, but they have inherent Limitations which include the superimposition of bilateral structural points, the magnification factor, and poor patient positioning.11

In an effort to overcome this limitation, the field of dentistry has evolved to another dimension by the introduction of advance radiological method i.e CBCT which is used to identify and quantify the characteristics of cephalometric variables assists clinicians in obtaining enhanced diagnosis and treatment planning.12

The present study concentrates on Malar prominence which is present on the zygomatic bone as an anterior protuberance. It is defined as maxillozygion which is localized at the most prominent point on the zygomaticomaxillary suture line below the lateral third of the bony orbit as described as SAMI P. et al.9 This landmark adds up to the esthetics of a perfectly balanced ideal face. Locating such a vital structure would help an orthodontist to carry out a perfect treatment planning and achieve ideal results. The present study describes malar prominence location which defines the face and helps in treatment planning of midface deficiencies.

Various two‑ dimensional facial analysis studies have been carried out to evaluate and diagnose malar deficiency. Hinderer13 placed different size malar implants on the plaster cast of a patient’s face to evaluate and determine the level of deficiency. Wilkinson14 drew a line from the outer canthus to the border of the mandible and stated that the malar eminence was located just posterior to that line. This technique was criticized as it could not define the relationship between the vertical line from the canthus and the intersection point with the mandible. In the study of Powell et al15 malar eminence was found to be 2–2.5 cm lateral to the lateral canthus of the eye. They concluded that “in patients with flat cheek bones laterally, or with full cheeks anteriorly, second to buccal fat, the exact eminence was difficult to establish.” In a study by Frey,16 the ideal projection of the cheek prominence was found to be approximately 2 mm beyond the anterior surface of the cornea in the sagittal plane along the Frankfurt horizontal plane. However, all these studies did not specify landmarks to describe the malar eminence and only spoke of these areas in general terms.

The landmarks referred in the present study for the location of malar prominence using CBCT are FZS, Z, ANS and ZM. FZS- Since the frontozygomatic suture is bilateral and the length of the bony projections is greatest near the center of the suture, in the present study, the centre of the suture is taken as a stable landmark.17 Z- It is the most commonly defined landmark on the temporal bone, also named the lateral or midzygomatic on the maximum horizontal and vertical outer curvature of the zygomatic arch Aulsebrook et al 18 (1996), so, this stable landmark was chosen for the present study to locate the malar eminence. ANS- The reason for using this landmark was the convenience in locating the anterior nasal spine in living subjects, thus resulting in a better clinical application of the data, thereby making the data derived by using this landmark would be more applicable to clinical settings.19, 20 ZM- it is the lowest point on the zygomaxillary suture by Hanihara21/Iscan and Steyn22 2013. Since the point lies inferior to zygomaticomaxillary suture, it is chosen as another stable landmark for this study.

In the study conducted by Sami P et al9 the anatomical landmark maxillozygion was identified and selected using CT by landmarks including fzs, zyg, and orbitale. But in the present study, the landmark was located using CBCT using the stable landmarks as shown in Figure 1. Three skeletal landmarks were used to produce a patient coordinated axis system in their study were: the nasion, subspinale and the basion. Where as in the present study, the orthogonal planes were constructed using Nasion (N) which was selected as the origin of the 3D coordinated system. The three reference planes are the mid-sagittal plane (X) passing through the S-N-Ba, the transverse plane (Y) passing through S-N and perpendicular to mid-sagittal plane, and the coronal plane (Z) passing through N and perpendicular to the other two planes. Erkan et al 23 studied the reliability of four different computerized cephalometric analysis programs and concluded that there is no statistically significant difference between the studied cephalometric analysis programs. Nemoceph software was used in the present study to analyse the CBCT data. The identified prevalence of constructed maxillozygion in the present study (p=0.35), is similar to the prevalence identified in the study by Nechela et al.8

When the comparision of mean values of parametres in all three orthogonal planes was done on both right and left half of the face, we have found most of the samples are symmetrical for midsagittal, axial and coronal planes and it is found to be not significant (Table 2). The present study results are similar to the study conducted by Nechela P et al.,8 where reliability of locating the landmark on both the sides of the face and he found that there was no difference on determining the data for position of the maxillozygion bilaterally.

In the study conducted by Jose J et al.,24 for validity of visual vector relationship for the clinical assessment of malar prominence, there was no statistically significant sexual dimorphism between the positive or negative vector groups, where as in the present study, there exists a sexual dimorphism, where the point coordinates on Mid sagittal plane(X), Axial(Y) and Coronal(Z) planes in males is higher than females and it is found to be statistically significant and also the mean distance between the Mzy and My is also higher in males when compared to females and its found to be statistically significant (p=0.03) (Table 4). In the study of Bozic M et al.,25 for facial morphology of Slovenian and welsh populations using 3-dimensional imaging concluded that there exists a morphological difference between Slovenian and welsh faces. So, the current study limited to bangalore population. There are no previous studies to localize the malar prominence using CBCT. Thus, an attempt has been made by using a novel method to localize the hard tissue maxillozygion using 3D CBCT for the defined population which will be helpful in orthodontic diagnosis and treatment planning for malar augmentation, camouflage treatment in subjects with midface deficiencies.

GB Hopkin Hypoplasia of the middle third of the face associated with congenital absence of the anterior nasal spine, depression of the nasal bones, and angle class III malocclusionBr J Plast Surg19631614653