The esthetic appearance of teeth forms a part of an overall picture, interacting closely with facial esthetics. The patient’s esthetic expectations were successfully met through a comprehensive approach of severe proclination by tipping the maxillary central incisors. Here, we are showing a novel approach to bring about uncontrolled tipping to decrease the inclination of severely proclined teeth.

Tipping is a simple type of tooth movement where a single force is applied to the crown, which results in movement of the crown in the direction of the force and root in the opposite direction. It is of two types namely controlled and uncontrolled tipping. Controlled tipping of a tooth occurs when a tooth tips about its center of rotation at its apex whereas in uncontrolled tipping the movement of tooth occurs about a center of rotation apical to and very close to center of resistance.1, 2 The esthetic appearance of teeth forms a part of an overall picture, interacting closely with facial esthetics. Since a pleasant smile is governed largely by proper alignment and symmetry, severely proclined teeth and asymmetry at the midline creates an unacceptable esthetic presentation for both patients and observers. The patient’s esthetic expectations were successfully met through a comprehensive approach of severe proclination by tipping the maxillary central incisors. 3 Here, we are showing a novel approach to bring about uncontrolled tipping to decrease the inclination of severely proclined teeth.

On dental history, patient had undergone extraction of grossly decayed 75 one day back in department of oral and maxillofacial surgery.

On intraoral examination, primary maxillary canines, mandibular central incisors and mandibular right second molar were retained. Molar relation was Class I on right and End-on on left side. Overjet was 15mm with deep bite of 100% (Figure 2).

The treatment started with bonding only the upper arch using 0.022” x 0.028” slot preadjusted edgewise appliance with MBT prescription. First preformed arch wire to be ligated in the arch was 0.014” ovoid NiTi for leveling and aligning and correction of minor rotations of first premolar on both the sides. On next appointment after 21 days a modified fabricated Transpalatal Arch (TPA) appliance was ligated in the upper arch.

A 0.032 inch stainless steel wire was used to fabricate a removable Transpalatal Arch (TPA) with its ends extending anteriorly. 2 vertical loops were bent in the wire on the rugae area on the palatal aspect of the proclined central incisors and the wire ends were soldered to each other (Figure 3). The modified TPA was inserted into the welded lingual sheath on the maxillary molar bands and ligated to prevent its slippage during force application.

Mandibular incisor brackets were bonded as an attachment on the palatal aspect of the maxillary central incisors. Continuous power chain was tied on the vertical loops as a slingshot and attached to the bonded attachment.

The power chains were changed every 3 weeks and we achieved proper tooth inclination after 3 months of treatment (Figure 4). Later, the vertical loops of the modified appliance are being used for correction of left second premolar rotation making it more versatile (Figure 5). This novel approach for correcting the inclination of the severely proclined teeth can be routinely used in the clinical practice. The appliance was not troublesome for the patient and the compliance was also good. 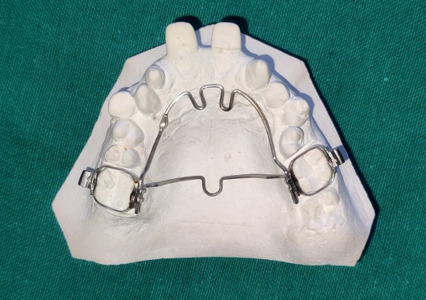 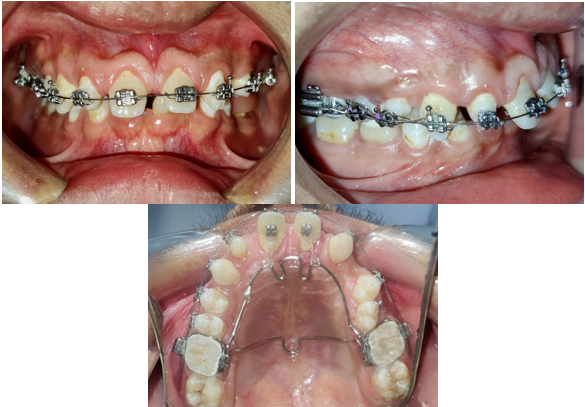 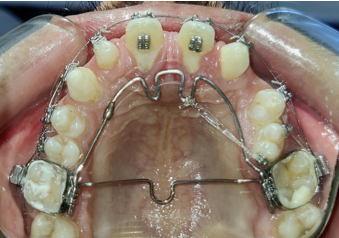 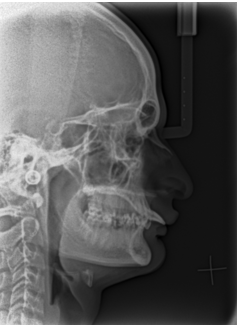 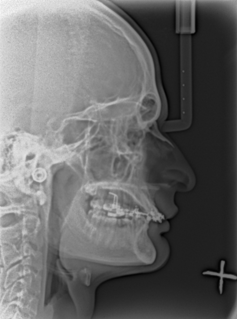 This modified transpalatal appliance had helped in improving the inclination of maxillary central incisors in around 3 months which plays a major role in esthetic appearance of the patient. The modification is further used in correcting the rotations of the teeth. The appliance was versatile and can be modified according to the patient’s need. The further progress of the treatment will be updated on completion of the treatment.