Description: The 'Mouse' loop has biomechanical advantages of increased range of activation and low load deflection rate. A case report is presented for the application of the loop. In the case report, a deciduous canine was extracted and its space was closed with the help of the 'Mouse' loop.

Conclusion: The space of the deciduous canine was closed within five months without any clinical disadvantage.

The extraction space closure by loop mechanics is one of the most popular low friction alternative.1

The position of a loop, the design of a loop and the pre-activation bends of a loop are the important factors that determine the effects of the loop for space closure. Also, the length and diameter of the wire component of a loop are proportional to the load-deflection rate. An ideal loop would have a high potential for activation and a low load-deflection rate. Also, it would be comfortable for the patient and easy to fabricate.2, 3, 4, 5 This loop was introduced to reduce the chairside time as well as to increase the range of activation of the loop.

The straight 0.017 x 0.025” TMA wire is bent gingivally at an angle of 65˚ and from this bend a height of 8mm was measured and marked. At this mark a helix of the diameter of 2 mm was fabricated with the bird beak plier. This arm was considered as beta arm (ß) (Figure 1).

The wire was then extended horizontally and marked at 8mm. A helix of 2 mm diameter was fabricated at the marked region with the bird beak plier. Further, this wire was extended occlusally by 8mm and given a horizontal bend such that it forms an angle of 65˚ (Figure 1). This arm of the loop was considered as alpha arm (ɑ) of the loop.

The inner part of the loop design resembles head of a mouse, that is the inverted triangle formed and the outer helices resembles ears of the mouse.

The pre-activation bends were incorporated in the loop. The alpha arm was 25˚ (ɑ) and beta arm was 30˚ (ß) (Figure 2). These alpha and beta bends produce moments that counter the tipping moments generated by the forces of retraction by the appliance.

The position of the loop is based on the clinician’s requirements of the anchorage and the movements.

The straight 0.017 x 0.025” TMA wire is bent gingivally at an angle of 65º and from this bend a height of 8mm was measured and marked. At this mark a helix of the diameter of 2 mm was fabricated with the bird beak plier. This arm was considered as beta arm (B). 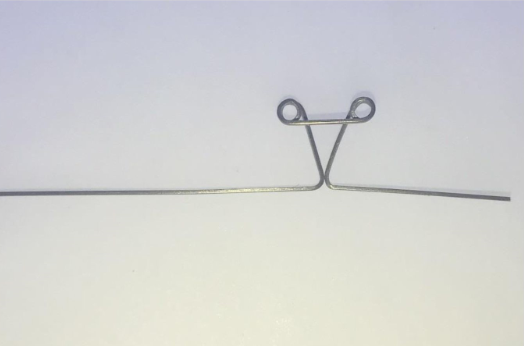 The pre-activation bends were incorporated in the loop. The alpha arm was 25° (a) and beta arm was 30° (B). 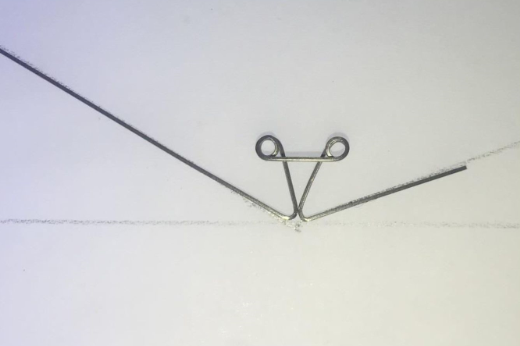 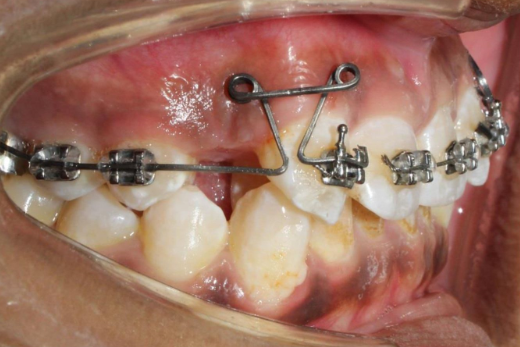 The space of the deciduous canine was was closed after 5 appointments. 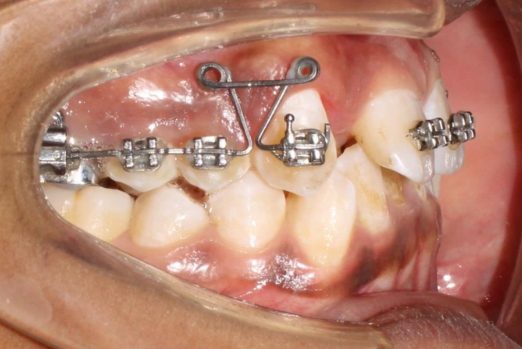 The ‘mouse’ loop provides similar results compared to other loops used for space closure, with the following advantages:

A 17 year old female reported with the chief complaint of crowding with the maxillary anterior region.

With respect to this case report the focus was on the use of the ‘Mouse’ loop.

Extraction of the deciduous retained teeth followed by the use of ‘Mouse’ loop for individual maxillary canine retraction was the objective.

The ‘mouse’ loop has much better control over tooth movement during retraction with a low load - deflection rate. The fabrication of the ‘mouse’ loop is less time-consuming. Also, the loop reduces the chances of pricking of the wire in the posterior region usually seen with the sliding mechanics.