Pooja U, Aravind, Alle, Lokesh NK, and Trivedi: Management of maxillary deficiency in a growing child with facemask therapy and RME- A case report

Class III malocclusion is one of the most difficult problems to treat. It has a multifactorial etiology involving both genetic and environmental causes. The dental and skeletal effects of maxillary protraction with a facemask are well documented in several studies. Although incorporation of expansion appliance along with facemask therapy can improve correcting both sagittal and transverse discrepancy of maxilla. The following case shows early treatment of a 9 year old boy with maxillary deficiency using an expansion screw along with facemask. Facemask therapy was followed by fixed orthodontic treatment to settle the occlusion. Treatment was completed after 14 months with positive overjet, class I molar and canine relationship on right and left side.

The etiology of class III malocclusion is multifactorial, involving both genetic and environmental factors.1 it is very critical to make a decision as the timing of early treatment is crucial for a successful outcome. Some studies have reported that early treatment should be carried out in patients to enhance the orthopedic effect.2, 3 moreover, an early benefit in terms of esthetics implies improved self-esteem, considering the psychological factor of the child. Facemask is one of the most commonly used interceptive tools to intercept developing skeletal class III malocclusion due to deficient maxilla.4

Stage 1: To correct reverse overjet and to improve the facial profile with a bonded protraction plate with hyrax expansion screw followed by facemask therapy.

Following expansion protocol, patient was asked to wear the petit type of facemask daily for 14 hours engaging 5/16" elastics from the horizontal crossbar of facemask exerting heavy forces on the craniofacial segment of about 16 oz for about 14 h daily. (Figure 5)

The patient was monitored every 2 weeks for initial 2 months, followed by every 1 month. After 1 month of facemak therapy an edge-to-edge bite was observed. Correction of reverse overjet and improved facial profile was achieved in 5 months, after that patient was asked to continue the use of facemask and protraction plate for desired overcorrection of maxillary protraction for another 4 months. (Figure 6, Figure 7) cephalometric changes achieved are listed in Table 1. (Figure 8)

Stage 2 treatment was started with fixed orthodontic treatment after removal of the protraction plate with hyrax. MBT 0.022 slot brackets were used and alignment started with 0.016 NiTi archwire. This guided the eruption of premolars and in settling the occlusion with ideal overjet, overbite, class I molar, and canine relation bilaterally. (figure 7) Tongue tie was released with soft tissue diode laser (0.8w, 980nm). (Figure 8)

Retention protocol followed was upper wraparound retainer and lower canine to canine bonded lingual retainers. Periodic follow up was instructed and they were also informed that unpredictable mandibular growth could create the need for a new intervention and potential orthognathic surgery during adulthood. 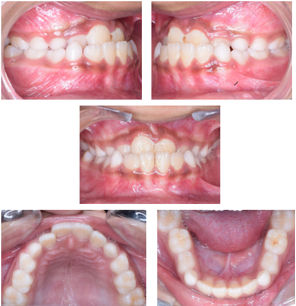 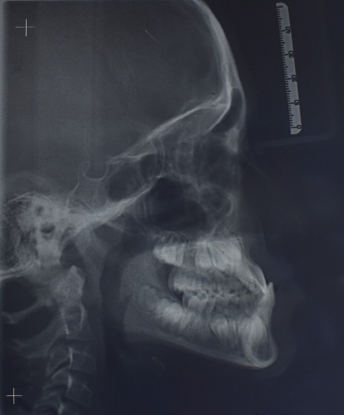 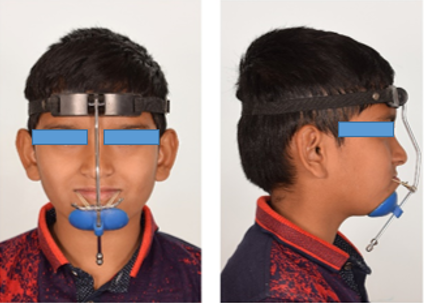 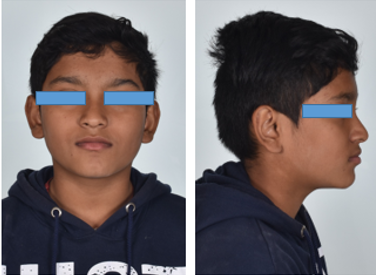 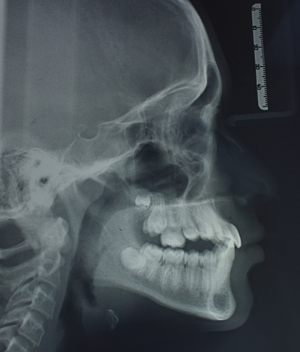 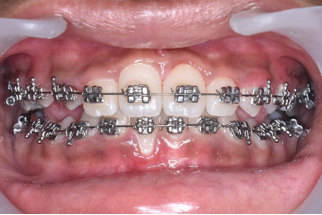 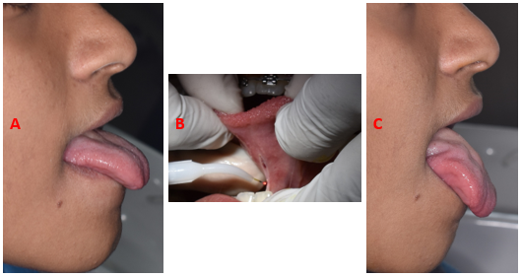 We have chosen facemask with RME therapy for achieving maxillary skeletal protraction. Haas 5 has mentioned in his article that rapid palatal expansion alone can advance the maxilla. A follow-up study by wertz et al. 6 found that maxillary advancement due to rapid palatal expansion treatment is limited and unpredictable. So combining RME with facemask therapy was beneficial in correcting maxillary deficiency in growing children 7 and an effective result was obtained in our study. As anchorage was taken from the forehead and chin face mask therapy not only advances maxilla but also prevents forward growth of mandible during the treatment period.

SNA angle has increased from 770 to 800 and ANB angle from 60 to 20 without much proclination of upper anteriors. A 30 increase in mandibular plane angle was observed this would be the result of downward and forward movement of maxilla.

The release of tongue tie will improve the tongue movement and skeletal class III tendency in the future. 8 Early diagnosis of malocclusion and its treatment is essential for the psychological development of a child and also to avoid complicated treatment procedures in future.

Facemask with RME is an effective treatment option for the management of skeletal class III malocclusion due to maxillary deficiency in an early age group. However, further follow-up of the patient is required as the mandible still continues to grow as he an adolescent.