The successful treatment of Orthodontic patient is dependent on careful diagnosis. Three planes of discrepancies are commonly described in orthodontics namely, transverse, sagittal and vertical. Of these, the sagittal discrepancies are most commonly encountered in day to day practice. This study was aimed to compare various methods of cephalometric analysis for assessing sagittal jaw relationship.

Materials and Methods: There were total of 180 lateral cephalograms used and each samples were divided into 2 groups based on their skeletal relationship according to ANB angle. i.e Class I and Class II. Class I and Class II were again divided into average, horizontal and vertical group. Pretreatment records were taken and tracing were performed on the lateral cephalogram and measured values were recorded and subjected to statistical analysis.

Conclusion: No single measurement is perfect in all the cases. A combination of different measurements should be used to have a true assessment of sagittal jaw relationship.

In orthodontic diagnosis and treatment planning, cephalometric radiograph is considered to be a valuable tool. Three planes of discrepancies are commonly described in orthodontics namely, transverse, sagittal and vertical. Of these, the sagittal discrepancies are most commonly encountered in day to day practice. Angular and linear measurements have been incorporated into various cephalometric analyses to help the clinician for diagnosing these antero-posterior discrepancies.1 Assessing these sagittal relationship is a challenging issue in orthodontics.

The evaluation of sagittal jaw relationship between maxilla and mandible has been one of the major problem in the field of orthodontics, which is of prime importance in diagnosis and treatment planning. This is because influence of growth at point A and B, rotations of jaws during growth, vertical relationships between the jaws and reference planes, and a lack of validity of the various methods proposed for their evaluation and appropriate treatment plan.2 The sagittal relationship is usually of utmost concern to the patient and needs a critical evaluation.

Clinicians with increasing frequency are treating malocclusions in conjunction with orthognathic surgery. With Broadbent’s introduction of the cephalometer in 1931, a new era of cephalometrics began in orthodontics with numerous cephalometric measurements been devised.3 Cephalometrics has been adapted as an important clinical tool for assessment of jaw relationship in all the three planes-antroposterior, transverse and vertical being an integral part of orthodontic treatment plan.

Aim & Objectives of the study

Source of the data

The study was carried out in the Department of Orthodontics &DentofacialOrthopedics, Kothiwal Dental College & Research Centre, Moradabad, UP and a total of 180 lateral cephalograms used for the study. The study samples were divided into 2 groups based on their skeletal relationship according to ANB angle. i.e Class I and Class II.

All the cephalograms were traced on a standard acetate paper of 8”x10” size and 0.003” thickness by a standard technique using a soft 3H pencil using a view box. Tracings were done in a darkened room with no additional light. On the tracing sheets the cephalometric analysis of all the ten parameters were performed and each measured values were recorded. All the tracings were done by a single observer. 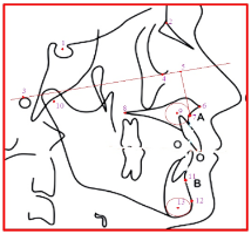 Showing various planes and lines in the study 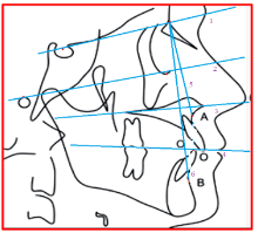 Parameters used in the study

The data of the study was subjected to Comparative test, Cohen’s Kappa coefficient and Cornbach’s alpha test. Before conducting a study, the examiner were trained and calibrated, a pilot study was performed by using intra examiner reliability (kappa) formula on 10 patients and the reliability was found to be 0.80-0.90 which is satisfactory.

Comparison of ten parameters in Class I and Class II

In orthodontic diagnosis both angular and linear cephalometric variables have been proposed to analyse sagittal jaw relationship and jaw position. This study attempted to analyse different cephalometric parameters which were used to indicate the sagittal jaw relationship in Class I, and II malocclusions and also to find the reliability and level of agreement between these parameters in assessment of sagittal jaw discrepancy. These variables can be erroneous as the angular variables can be affected by changes in facial height, jaw inclination, and total jaw prognathism, whereas linear variables can be affected by the inclination of the reference line. In the current study, seven angular and three linear variables had been used to assess the antero-posterior jaw relationship. AB plane ∠ , AXB ∠, FABA ∠, YEN ∠, K ∠, Beta ∠, W ∠ were the angular variables and Wits appraisal AF-BF distance, APP-BPP distance were the three linear variables. All the parameters were found to be equally significant in assessing the antero-posterior discrepancy like previous studies.16, 17 However, each of the parameters had their own merits and demerits; hence, it becomes important to find which one is more reliable for the clinician.

The most popular parameter for assessing the sagittal jaw relationship remains the ANB angle, but it is affected by various factors and can often be misleading. Taylor and Nanda18, 19 have shown that position of nasion is not fixed during growth, and any displacement of nasion directly affects ANB angle. Furthermore, rotation of the jaws by either growth or orthodontic treatment can also change the ANB. To overcome this, the Wits appraisal was introduced which avoids the use of nasion and reduces the rotational effects of jaw growth, but it uses the occlusal plane, which is a dental parameter to describe the skeletal discrepancies. Occlusal plane can be easily affected by tooth eruption and dental development as well as by orthodontic treatment.20

A popular recent alternative, Beta angle avoided use of functional plane and is not affected by jaw rotations. But it uses points A and B, which can be remodelled by orthodontic treatment and growth.21, 22 Furthermore, as shown by various studies, the reproducibility of the location of condylion on closed-mouth lateral head films is limited.23 Instead of condylion, centre of condyle could be used, but approximation of center of condyle is difficult.24

Yen angle25 was introduced to overcome few of these deficits. This does not utilize A and B points as skeletal landmarks, which are affected by local remodelling due to orthodontic treatment or occlusal plane as in Wits. Instead it utilizes points M and G which are not affected by local remodelling, and they approximate to being centroid points similar to sella. As it is not influenced by growth changes, it can be used in mixed dentition as well. But rotation of jaws can mask true sagittal dysplasia here too.25

To overcome these existing problems, a new study was thus required. Since this is a novel study and to the best of our knowledge, the only of its kind, where different sagittal parameter were compared to assess the level of agreement and reliability, a direct comparison cannot be made with any other study or studies.

In the past various studies were done by using the cephalometric parameters to assess sagittal jaw relationship but none had provide the level of agreement between these parameters and reliability of these parameters in day to day clinical practice. Nadia et al26 had done a study where they had taken 155 lateral cephalograms for the assessment of sagittal jaw relationship with a mean age of 10.5 years ± 1.39 years. Six linear and angular measurements were taken. No sex or age differences were detected in all parameters. Roy P et al.27 had compared the credibility of five cephalometric measurements in assessing the antero-posterior jaw relationship and to assess the correlation between various measurements used for antero-posterior discrepancy, including ANB, Yen angle, Beta angle, Wits appraisal, and horizontal appraisal. A total of 99 patients aged 16 years and above patients were subdivided into skeletal Classes I, II, and III groups of 33, each based upon the ANB angle derived from the pre-treatment cephalogram and showed that ANB angle had very high sensitivity and specificity to discriminate a Class II from Class I and Class III from Class I.

In this study Table 4 shows that A-B Plane angle has the highest frequency in Class I average and horizontal group (100%) and in class II horizontal group (83.3%). This shows that while doing cephalometric analysis the maximum number of cases were found with almost same AB plane ∠ values. However, this plane doesn’t show any reliability (Table 11, Table 12) in all groups but have a strong level of agreement with FABA ∠ (0.867) and WITS (0.865) in Class II average group (Table 8) whereas Ahmed 28 et al in 2018 said that ANB has a strong level of agreement with A-B Plane angle i.e 0.802 for all classes of malocclusion.

Sang and Suhr 13 concluded that APDI and WITS appraisal are the parameters for the evaluation of AP relationship of dentition rather than the jaws.

However AXB ∠ was much more reliable in Class II vertical 0.818 (Table 12) followed by class II average (0.793) (Table 12). A study conducted by Music et al 29 showed that the frequency distribution of classes I, II and III were similar coincident with the one given by the cephalometric clinical diagnosis. The most valid method was the AXB bearing with the cephalometric clinical diagnosis a 90.91% concordance.

Judy Farman et al in 199530 found no significant difference in AF-BFdistance between males and females in class I group.

Highest frequency was seen in Class I average and vertical group (100%) (Table 4).

In class I average group FABA angle shows the weak level of agreement with all the other parameters. (Table 5)

Sang and Suhr13 concluded that FABA angle may provide not only a reliable cephalometric measurement of AP relationship but also a clue to the facial profile.

Highest frequency was seen in Class I and Class II vertical groups (73.3%) (Table 4).

Good reliability was seen in Class II vertical group. (0.809) (Table 12) and in class II average group (0.849) (Table 12). A study conducted by Dr.Surendra and Dr.Lili 31 on Chinese population shows a significant correlation between Yen angle and W angle in all three classes.

There is a strong level of agreement found between W and K angle (0.815) in class II vertical group (Table 10).

In this study it has been seen that the most homogenous parameter were AB plane angle and FABA angle.

In terms of reliability, the most reliable parameter is AB plane angle in class II vertical group (0.879) and in class II average YEN, W and K angle have also shown good reliability (Table 11).

So it has been concluded that all the sagittal jaw parameters used to assess maxillo-mandibular relationship are affected by change in one or the other parameter. No single measurement is perfect in all the cases. A combination of different measurements should be used to have a true assessment of sagittal jaw relationship.