Aims: The aim of this study was to evaluate the effect of PowerScopeTM (Class II Corrector) on skeletal, dental and oro-pharyngeal airway dimensions in class II malocclusion with retrusive mandible.

Materials and Methods: Twenty patients with age group of 11 to 14 were selected for this study. Experimental group underwent Power scope class II corrector therapy and control group, alignment of only upper arch respectively. Lateral cephalometric radiographs were taken in both experimental group and control group before and after 6 month of treatment. Sixteen measurements in that eight skeletal, five dental and three pharyngeal airway were assessed to know the effect of PowerScopeTM Class II corrector on skeletal, dental and pharyngeal airway

Upper airway structures play an important role in the development of the craniofa­cial complex.1, 2 Deficient breathing may occur as results of narrowing of pharyngeal airway dimensions; this may leads to reduction of growth hormone levels in growing children and obstruc­tive sleep apnoea in adults.3, 4

Preservation of skeletal phenotype even after growth in case of skeletal class II malocclusion is evident. It is important to render effective orthodontic treatment during the growth period, which not only improves dental, jaw function and dentofacial esthetics, but also preventing the possible OSAHS and snoring.5

A number of mandibular advancement oral appliance such as removable and fixed functional appliances clinched popularity in recent years to achieve better overall mandibular growth, growth in the appropriate direction and also prevent oro-pharyngeal collapse by modifying the posterior position of the tongue.6, 7

20 patients in the cervical vertebral maturation index9 stages 4 and 5 were selected for study and randomly assigned to 10 experimental groups and 10 control group respectively.

Pre-adjusted edgewise appliance (0.022” MBT slot) followed by PowerScopeTM Class II corrector was used for experimental subjects. At the end of the aligning and leveling, (Figure 1) PowerScopeTM Class II corrector with the help of driver, engaged mesial to the first molar on the maxillary rectangular stainless steel arch wire and distal to the canine wire on to the mandibular rectangular stainless steel arch. In order to prevent the flaring of the lower anteriors, 100 labial root torque was given in lower wire. Patients underwent fixed functional therapy for a period of 6 months, Lateral cephalograms were obtained before and after 6 months of fixed functional phase.

Control group subjects were started with fixed appliance therapy only in upper arch, it would be unethical to withhold control group without treatment. Lateral cephalograms were obtained before and after 6 months of upper arch alignment and then patients were treated for skeletal class II malocclusion.

Lateral cephalograms were made under standardized conditions. The head of the patient was erect and exposed at the end of expiration phase of the respiration. Instructions were given to the patient not to move their head and tongue and not to swallow while taking cephalogram exposure. All cephalograms were recorded in the same machine with same exposure parameters using Kodak 8000 C digital x-ray machine and traced manually by single individuals to reduce systematic error of cephalometric measurements. 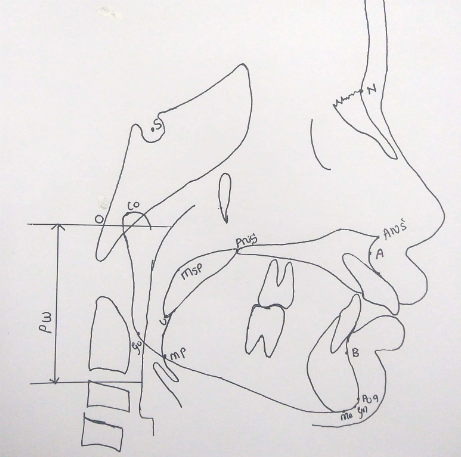 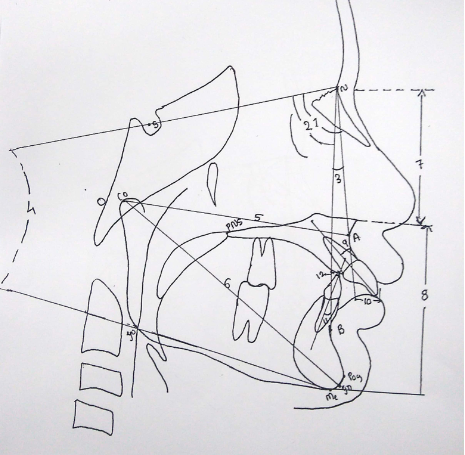 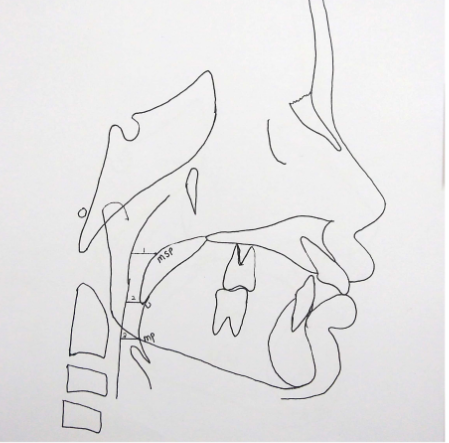 On comparison of pre-treatment values in both group showed no statistically significant difference indicating that both groups had similar characteristics of skeletal class II malocclusion.(Table 1)

In this present study, after appliance therapy maxillary length or position showed no change. Similar findings were observed by previous studies. 8, 10, 9, 11, 12, 13 where as mandible was positioned anteriorly lead to decrease in maxilla-mandibular discrepancy. These observation were in accordance with the previous studied 10, 9, 11, 12, 13 where as these changes were insignificant on comparison with control group indicating that PowerScopeTM Class II Corrector appliance has no effects on both maxilla and mandible. This finding is in accordance with previous study8 Vertical facial height showed statistically insignificant. This result was in agreement with other previous studies.8, 14, 15

In this study, upper incisors did not show any changes in both groups. This was accordance with previous study13 but against other studies, where investigators claim that upper incisors tip lingually by appliance.11, 15

Experimental group showed highly significant proclined and protruded lower incisors after treatment and decrease in overjet. This may be due to downward and forward force applied on the lower incisors by the appliance to protrude the mandible. Similar finding were observed by other studies.8, 11, 12, 13

Past decades many studies had been done to evaluate the effects of respiratory function on craniofacial growth, which is practically applicable during orthodontic diagnosis and the treatment planning.

In cross section, oropharyngeal region reveal narrowest part and it is considered important clinically as its has chief role in airflow and oxygen saturation.12 Studies have shown that skeletal Class II subjects in both adults and children oropharynx dimension is significantly smaller than skeletal class I.16, 17 Narrowing of pharyngeal airway dimensions may be due to position of tongue and soft palate posteriorly in subjects with retrognathic mandibles. 18

In the present study, oro-pharyngeal airway mainly inferior pharyngeal airway (IAS) showed statistically significance increase after treatment. This may be due to proclination of lower incisors could have lead anterior position of tongue caused overall increase in inferior pharyngeal airway (IAS). Similar findings observed by previous study.19 where as on comparison with control group showed insignificant indicating that PowerScopeTM Class II Corrector appliance won’t be a promising appliance for correction of sleep apnea.

Limitation of our study was conventional cephalometric films were used rather than CBCT. Regardless of disadvantages of conventional cephalograms still play a crucial assessment tool for upper airway research.20 further studies are needed with large sample.