Growth prediction is an estimation of the amount of growth to be expected. In orthodontics the term refers to the estimation of amount and direction of growth of the bones of the craniofacial skeletal and overlying soft tissues. Successful prediction requires specifying both the amount and the direction of growth, in relation to the reference point. Estimation of dentofacial growth must consider the increments, vectors, area, duration and timing of growth accessions. All these are subjected to the changes in growth pattern

Growth prediction is an estimation of the amount of growth to be expected. In orthodontics the term refers to the estimation of amount and direction of growth of the bones of the craniofacial skeletal and overlying soft tissues. Successful prediction requires specifying both the amount and the direction of growth, in relation to the reference point.1 Estimation of dentofacial growth must consider the increments, vectors, area, duration and timing of growth accessions. All these are subjected to the changes in growth pattern. The ability to predict the magnitude and direction of a patient’s facial growth early in life would enable the clinician to identify those individual who requires interceptive growth modification and to ensure that the appropriate treatment can be rendered while growth is expected. Growth prediction helps the clinician to intercept and correct the malocclusion. It can be used as patient education aids. Growth prediction (VTO) is helpful in 'visualizing' the treatment objectives and prioritizes the objectives, keeping in mind the growth pattern of the patient. A tool for orthodontic treatment planning but without forcing any particular treatment procedure.

Method of predicting growth are given by various authors-

Bjork, in 1969, described three methods for predicting the craniofacial development

This is a commonly used method in which tracing periodic cephalometric radiographs follows the course of development.in the period of most rapid growth this may be established within a year or two

For clinical purpose according to Bjork the analysis of the vertical development of the face may be improved by using natural reference structure in mandible by superimposing two radiographs taken at different ages and orienting them with references to this structures, growth pattern of the mandible can be estimated with fairly high degree of accuracy.2

This aim at a prediction of the facial development on the basis of the facial morphology determined metrically from a single radiographic film.3 However statistical studies of the possibility of the predicting the intensity of the directions of subsequent development from size and shape at childhood. Indicate that this method is not feasible at least from a clinical point of view no matter with system cephalometric analysis has been used.

This is based on the information concerning of the remodelling process of the mandible during growth, gained from the implant studies by Bjork.4 The principle is recognized specific structural features those results of the remodelling particular type of mandibular rotation.5 A prediction of subsequent course is then made on the assumption that the trend will continue.

It easier now to classify growth prediction methods into:

Cephalometric growth prediction methods can further be classified as:

Dr. Charles Tweed, in 1954, presented his work on diagnostic facial triangle. It is a clinical treatment planning tool that attempts to establish the prognosis of treatment.

Three angles formed are named as;

Tweed stated that the faces of all children grow downward and forward in one of the three ways. Therefore, facial growth trends may be classified as type A, Type B and Type C, each having subdivision.6

Growth is approximately equal in both vertical and horizontal directions. According to Tweed, approximately 25% of patients present this type of growth trend.

In this type, the growth is downward and forward with the middle face growing forward more rapidly than the lower, as designed by the increase in ANB angle. If ANB is less than 4°, prognosis is fair and reasonably acceptable facial changes and good occlusion can be attained with proper and determined treatment procedures.

In which type, the lower face is growing downward and forward more rapidly than the middle face, with a decrease in ANB reading. The prognosis is excellent for treatment of patient with Type C growth trend as far as facial esthetics is concerned. About 60% of the patients exhibit this type of growth trend, according to Tweed.

Robert M. Ricketts, in 1972, using trial and error procedure with longitudinal cephalometric records and computers has developed a method to determine the arc of growth of mandible.

Considering arcial development as a basic explanation of mandibular growth is “A normal human mandible grows by superior anterior (vertical) apposition at the ramus or the curve or arc which is a segment formed from a circle.7 The radius of this circle is determined by using the distance from mental protuberance (Pm) to a point at the forking of the stress lines at the terminus of the oblique ridge on the medial side of the ramus (point- eva)”

Implication of growth principle have been summarized by Ricketts as

Tooth mineralization as an indicator of the pubertal growth spurt

The commencement of adolescent peak growth velocity in body height and facial growth is closely related in timing to certain ossification events which occur in the hand and wrist. An investigation into calcification patterns of the teeth revealed a high degree of correlation between the stage of mineralization of the lower canine and these events.8

The state of mineralization was related to degree of calcification of the hook of hamate, and the development of the epiphysis of the middle phalanx of third finger. He found that calcification stage G of the mandibular canine correlated the best with other maturational indicators.

Diagrammatic appearance of stages C to H of tooth development for uni- and multiradicular teeth. 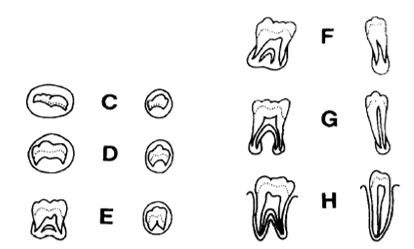 Frontal sinus as a predictor of mandibular growth

Rossouw, Lombard, and Harris, in 1991, attempted to assess the correlation between the frontal sinus and the mandibular growth. 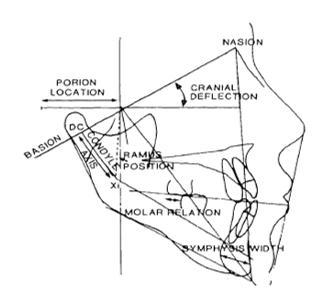 It is a procedure based primarily on cephalometrics, the purpose of which is to establish a balanced profile and pleasing facial aesthetics and to evaluate the orthodontic correction necessary to achieve this goal. This is core of the few methods that emphasize the soft tissue profile balance of the patient’s face. Guidelines are provided whereby the lips are graphically repositioned.10 A template may be used to facilitate drawing the soft tissue of the lips. This is followed by location of the maxillary incisor teeth. Finally, the lower incisors are repositioned to be in harmony with the upper incisors. Following upon the repositioning of the mandibular incisor, the resultant arch length discrepancy may be calculated to determine whether or not teeth should be extracted prior to orthodontic correction. Should the computed information suggest that teeth be extracted, the V.T.O. will yield information based on anchorage requirements as to whether first or second bicuspids should be removed, or whether the proposed treatment plan is feasible or desirable.

The V.T.O. accomplishes the following:

The V.T.O. procedure described is based on concepts of growth prediction which relate facial skeletal structural changes to the base of the craniofacial complex. 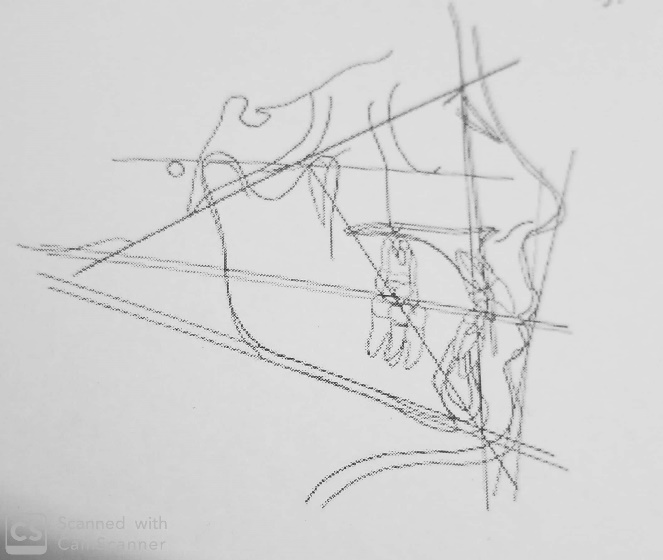 Also in 1982, Hagg and Taranger created a method using the hand-wrist radiograph to correlate certain maturity indicators to the pubertal growth spurt. Hand wrist radiograph is “the most standardized and studied method of skeletal age assessment”, according to Smith in 1982, Fishman published a system for assessment of skeletal maturation on the basis of 11 discrete “skeletal maturity indicator” covering the entire period of adolescence development. The indicators provide identification of the progressive maturation events and are located on a six anatomic sites located on the thumb, third finger, fifth finger and radius.

Width of epiphysis as wide as diaphysis 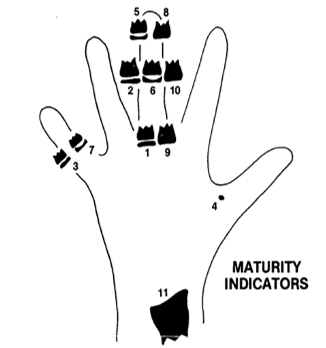 Six stages of hand-wrist development are the baseline for clinical reference:STAGE I: Early stage: shows the absence of the pisiform; hook of hamate and epiphysis of proximal phalanx of 2nd digit is narrower than its shaft.STAGE II: Prepubertal: proximal phalanx of 2nd digit and its epiphysis are equal in width. Initial ossification of pisiform seen.STAGE III: Pubertal onset: initiation of calcification of hook of hamate/ pisiform. Epiphysis of PP2 broader than shaft.STAGE IV: Pubertal: capping of the shaft of the middle phalanx of 3rd digit by its epiphysis.STAGE V: Pubertal deceleration: calcified ulnar sesamoid. Calcification of epiphysis of distal phalanx of 3rd digit with its shaft. Epiphysis of radius and ulna not yet fully calcified with the respective shafts.STAGE VI: Growth completion: epiphysis of radius and ulna fully calcified with the shafts.

Cervical vertebrae maturation index or CVMI is stated as follows: 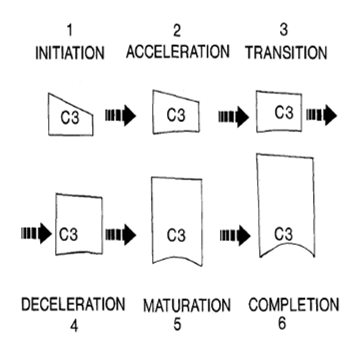 The amount and direction of facial growth have long been regarded as vital factors in determining the success or failure of orthodontic treatment in a large percentage of patients. The ability to predict craniofacial growth accurately for individual cases will significantly reduce the difficulty of treatment planning in many instances.12 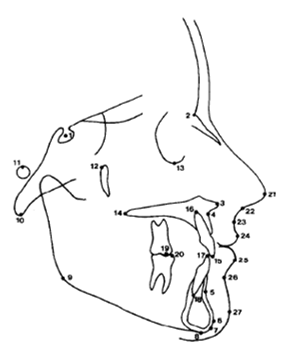 The computer was also accurate in assessing the absolute length of the mandible (basion-b point) but tended to under predict the degree of clockwise mandibular rotation as assessed by the mandibular plane angle (go-gn to sn).

The computer also proved to be inaccurate in measuring the anteroposterior changes in molar position. Both the maxillary and mandibular first molars were found to be more posterior (relative to the pterygovertical plane).

The authors declare that there is no conflict of interests