This paper discusses the management of two young patients with Angles Class II Division 2 malocclusion with minimal growth remaining and with mandibular retrognathism who were treated with a two-phase therapy. The first phase involved alignment of arches with fixed Pre Adjusted Appliance (0.018”Roth). This was followed by a second phase involving application of Forsus fixed functional appliance for 6 months that resulted in unlocking of the mandible to Class I molar and canine relationship.

Fixed Functional Appliances in general and the Forsus FRD in particular when used in conjunction with full bonded fixed appliance greatly facilitates the correction of Class II Division 2 malocclusions and the duration of the treatment is also reduced.

Class II malocclusion is one of the most frequent problems encountered in orthodontics and it occurs in about one third of the population.1 This malocclusion is described as a distal relationship of the mandible to the maxilla with a combination of different dental and skeletal components which can affect facial aesthetics and functional status adversely.2

Angle further divided the malocclusion into Division 1 and Division 2 depending upon the incisor relationship. Division 2 is characterised by distocclusion, increased overbite, labioversion of maxillary lateral incisors, retroclination of the maxillary central incisors and a more normal lip function. The facial skeleton is not retrognathic like Division 1 malocclusion.3 The deepbite which occurs in Class II Division 2 patients is because of Infra-occlusion of molars and lack of effective occlusal stops for the eruption of lower incisors leads to an increased overbite. These patients are also characterised by more acute crown root angulation (Collum angle) as a result of high lower lip line causing deflection of the crown to the tooth relative to the root after eruption.4, 5

Removable or fixed functional appliances can be used to correct Class II malocclusions depending on the existing antero-posterior discrepancy, cooperation, and growth status of the patient. Patients who have completed their growth and those with Class II mandibular retrusion are mostly treated with fixed functional appliances which require minimal patient co-operation.6, 7 A number of Class II correctors have been introduced in the recent past that reduce or minimize the need for patient compliance.

The aim of this paper is to project and discuss two successful cases of Class II Division 2 malocclusion treated with Forsus Hybrid Fixed functional appliance. 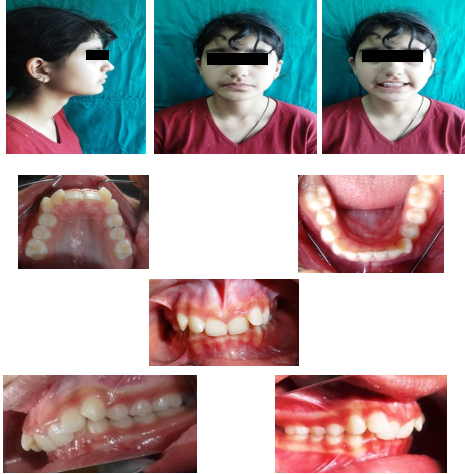 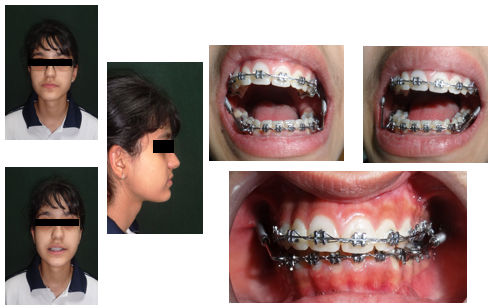 Pre-treatment & Post-treatment Cephalometric measurements are given in Table 1. The results indicated improvement in both skeletal and dental parameters. At the end of treatment an ideal overjet & overbite were achieved. 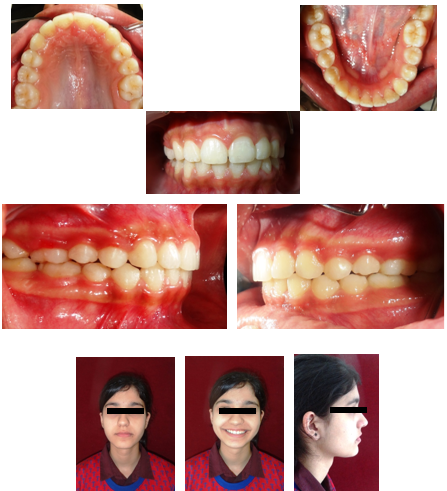 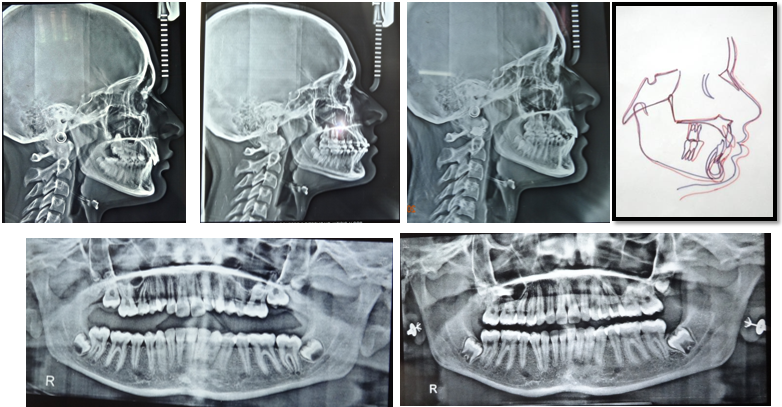 Cephalometric superimposition indicated downward and forward movement of the mandibular dentoalveolar arch and restraint of the maxillary dentoalveolar segment. ANB angle decreased from 5 degrees to 2 degrees with SNA of 79∘ and an SNB angle of 77 degree and Wits from +3 to -1mm.

Cephalometric measurements indicated that mandibular incisors were proclined from IMPA of 89 degree to 110 degree. 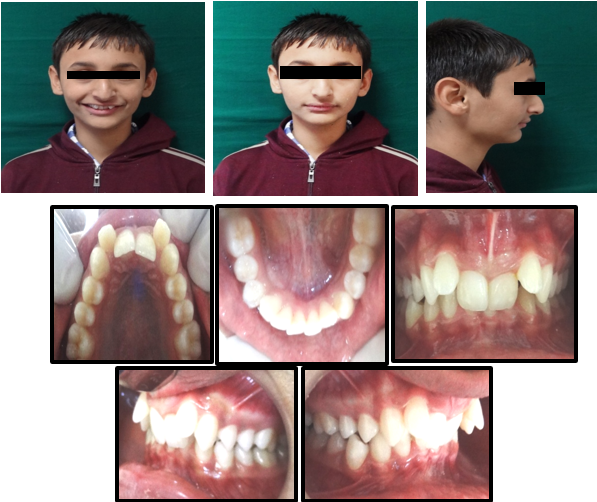 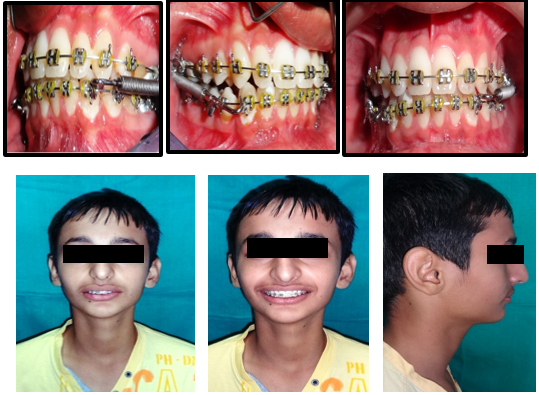 Phase I leveling and alignment Phase II Similar mechanics as in case 1 were carried out in this case also with Forsus Fatigue Resistant Device in situ for 06 months and the total treatment time for the case was 24 months.

Cephalometric measurements at the pre-treatment, post-treatment periods are given in Table 2. The results indicated improvement in both skeletal and dental parameters. At the end of treatment, ideal overjet and overbite were established and there was improvement in profile

Cephalometric measurements indicated that maxillary incisors were labially inclined (U1-SN: 97∘ to 105∘), and mandibular incisors were proclined from IMPA of 81∘ to 95∘ 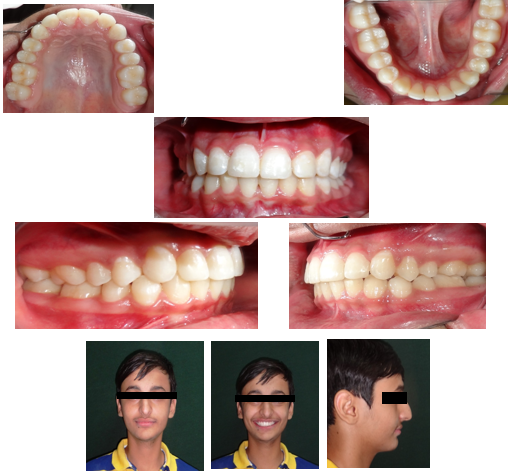 Emil Herbst was the first to use fixed functional appliance to treat malocclusion as early as 1905.8 Hans Pancherz has been credited with the reintroduction of the Herbst Appliance in the 1970’s and he has published a voluminous literature on the long term skeletal, dentoalvolar and TMJ changes brought about by the Herbst appliance.9, 10

The Forsus Fatigue resistant device is a hybrid fixed functional appliance supplied in five different lengths 25,29 32,35 and 38mm. Sood S11 in his master thesis studied the cephalometric findings in a group of seven patients and concluded that the Forsus FRD leads to marked improvement in profile, overjet and overbite in treated subjects. The study showed that there are statistically significant changes in mandibular length, improvement in ANB angle and significant increase in the IMPA.

Sood et al12 while evaluating muscle response during treatment of Class II Div 1 subjects with Forsus Fatigue resistant device concluded that though the Class II correction occurs in 3 months it is advisable to give the appliance at least six months for allowing adequate neuromuscular adaptation to occur for long term stability of the result.

In the above mentioned two cases as the patients had some residual growth remaining (CVMI stage CS5), therefore it was decided to treat both patients with non-extraction orthodontic mechanics.

Forsus FRD appliance is usually recommended for the Class II malocclusions especially in patients with mandibular dentoalveolar retrusion. This appliance can lead to mandibular growth and favourable dentoalveolar changes in patients at or before the peak phase of pubertal growth.13, 14 On the other hand, mostly dental changes are encountered for the patients at post-pubertal period.15

Thus to conclude Fixed Functional Appliances in general and the Forsus FRD in particular when used in conjunction with full bonded fixed appliance facilitate the correction of Class II Div 2 malocclusion and the duration of the treatment is also reduced. The improvement is mostly contributed by skeletal changes that include an headgear like effect on the maxilla and distalisation of the maxillary molars, mesialisation of the mandibular molars and proclination of mandibular incisors.

The most likely reason for correction of the cepahlometric parameters such as ANB angle and Wits is the forward posturing of the mandible due to unlocking of the lower jaw which occurs due to proclination of the retroclined maxillary incisors.