Hyperdontia presents as an odontostomatologic derangement where and excess in tooth number is observed. Mesiodens in the premaxilla is the most commonly occurring supernumerary tooth. It is usually clinical in form. The following case reported with erupted supernumerary tooth. The consequences and management has been discussed in elaborate details.

The etiology can either be genetic or environmental, dental lamina hyperactivity theory is by far the most accepted theory. According to Primosch’s classification, the supernumerary tooth in the present case can be classified as rudimentary or dysmorphic with conical form.5

We report a case with non-syndromic, non-familial occurrence of multiple supernumerary teeth and its elaborate treatment plan and progress. This case highlights the classical features associated with erupted supernumerary teeth in the anterior region, there was crowding and dilaceration in the associated lateral incisor.

A 17 years old male reported to Orthodontics OPD with the chief complaint of irregularly arranged upper front teeth, with an inhibition to smile in public. The patient was apparently healthy with no other systemic disorders or anatomic aberrations. The patient gave history of extraction of a supernumerary tooth, which was present in the maxillary anterior region. Extra oral examination revealed a mesoprosopic face mild facial asymmetry and anteriorly divergent profile. Intra-oral examination revealed a mesiodens with respect to maxillary central incisors, right lateral incisor and canine were in cross-bite, and the right lateral incisor was palatally blocked. Fractured tooth margins on 11 and 21 were also seen (Figure 1). Peri-apical, orthopantomogram and occlusal radiographs were taken to explore the presence of unerupted supernumeraries and to assess the mesiodens present in the premaxillary region (Figure 2). Cephalometric findings revealed a Class III skeletal base with a hyperdivergent growth pattern. The upper incisors were proclined while the lower incisors were upright indicating dental compensation of class III skeletal pattern. Based on model study a diagnosis of Angle’s Class I type 3 malocclusion with severe distopalatal rotation of the maxillary central incisors was made. The supernumerary tooth was extracted and the patient was treated with preadjusted edgewise appliance MBT 0.022X0.028 slot. Light reciprocal forces using ligature wire, were applied on the maxillary central incisors for their derotation. Space was created for blocked 12 by compressing multi-coil open spring between 11 and 13. Alignment was completed in 12 months. The total treatment time was 18 months (Figure 3). Cephalometric changes (Figure 4) are enlisted in Table 1. Oral prophylaxis was performed routinely throughout the treatment. Fractured incisors were contoured and esthetically rehabilitated. Permanent retention was given in both arches using lingual bonded retainers. 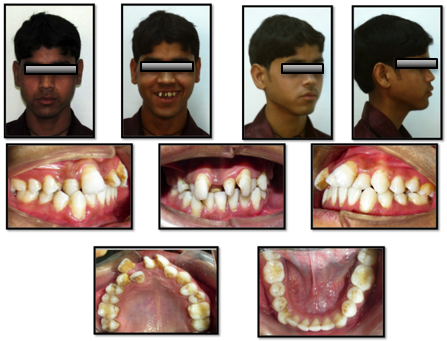 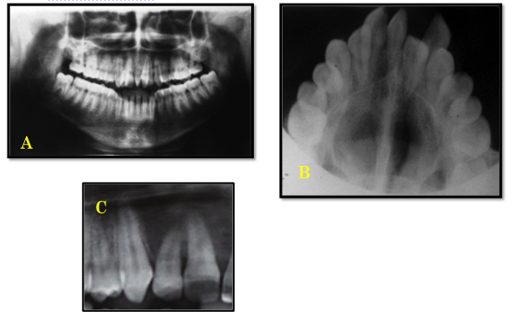 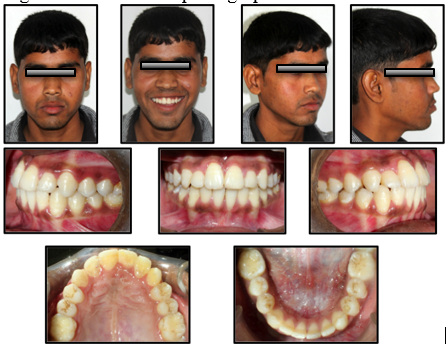 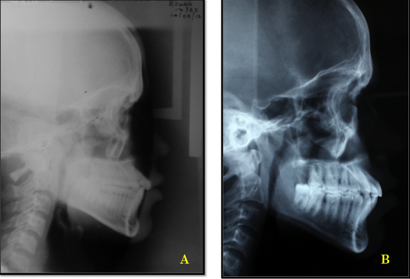 Supernumerary teeth have been found to be strongly associated with deformities such as cleft lip and palate, as well syndromes such as Ehlers-Danlos syndrome, Gardner’s syndrome, Apert’s syndrome, Cleidocranial dysostosis, ectodermal dysplasia and Fabry Anderson's syndrome. A detailed history is required for a thorough diagnosis. For diagnosing the dental condition, standardized peri-apical radiographs, occlusal radiographs and orthopantomograph is indicated, a full set of x-rays aids in diagnosis and treatment planning. Computed tomographs should be obtained in conjunction with the conventional radiographs in the light of clinical findings, if there are multiple impactions or signs of pathosis.

Supernumerary teeth can be associated with many complications, crowding in the form of rotations or spacing of teeth being the most common.6 Presence of supernumerary teeth impaction or delay in eruption of the associated permanent teeth, root anomalies such as dilacerations, delayed root completion or root resorption of the adjacent tooth.7 Serious complications with unerupted supernumerary teeth such as cyst formation, migration into maxillary sinus and nasal cavity have also been reported.8 In the present case, the supernumerary teeth lead to dilacerated root of the right lateral incisor (Figure 3), a wide diastema with extreme rotation of the incisors and crowding in anterior maxilla. De-rotation to normal angulation in 90º rotation cases must be dealt with low orthodontic forces to avoid devitalization and root resorption of the associated tooth.9 An added problem in this patient was the class III skeletal base, in light of the skeletal findings a non-extraction plan was followed in the maxillary arch, in spite of the blocked out lateral incisor in the upper right quadrant. The profile of the patient was maintained by slight downward and backward rotation of the mandible.

It has been suggested that genetics plays an important role in occurrence of supernumerary teeth, it presents as a strong hereditary trait, which does not seem to follow a Mandelian pattern.10 Patient counseling for periodic check-up as well as early diagnosis in the first-degree relatives is highly recommended to avoid complications and to reduce treatment time.10