Class III malocclusion is considered to be one of the most difficult and complex orthodontic problems to treat. Prevalence of class III malocclusion in Caucasians ranges from 0.8 to 4.0% and rises up to 1213% in Chinese and Japanese populations, while in North Indian population, class III malocclusion is found in up to 3.4% of the population. A 19 years old boy who reported with chief complaint of poor smile because of forwardly placed lower jaw from 2 years. Treatment plan of orthodontic treatment first and surgery later was planned. The upper and lower arches were aligned until a 0.019” x 0.025” stainless steel archwire could be placed. . Bilateral sagittal split osteotomy with short lingual split was carried out using surgical saws. 05 mm set back of mandible was performed. After 06 weeks class III elastics and settling elastics were given.

These complex cases require careful treatment planning, an integrated approach and patient cooperation.2 A poor facial appearance is often the patient's chief complaint, but it may be accompanied by functional problems, temporomandibular disorders, or psychosocial handicaps.3 Now a day’s shift is occurring towards viewing the patient as co decision maker. Ackerman says that we should “talk with” rather than “talk to” the patient. 2D imaging software and 2 D printing has made the process of diagnosis, treatment planning and patient involvement in their treatment much simpler, more accurate, acceptable and reliable for both Orthodontist and patient.4

Treatment modalities in Orthodontics include growth modification procedures in growing children, Orthodontic camouflage and Ortho surgical procedures in non-growing individuals. Combined treatment of Orthodontics with surgery had been the only answer to achieve the desired predictive results in adults with severe skeletal discrepancy.5

In this case report a 19 yrs old boy was treated with ortho-surgical method for management of class III malocclusion.

Intraorally patient was having posterior cross bite wrt upper posteriors on left side and premolars and 1st molar on right side. Both the arches were U shaped with rotated molars in upper arch and premolar rotation in lower arch with reverse overjet of 1 mm and 0.5 mm of overbite with bilateral class III molar and canine relation. The deviation of 1.5 mm midline to left side was also present [Fig 2].

To know about the quality and quantity of skeletal discrepancy, cephalogram tracing was done using manual method and Nemoceph software and values of Steiner’s, COGS and Arnett analysis were interpreted [Table 1, Table 2, Table 3]. Cephalometric findings revealed retrognathic maxilla sagittally and normal vertically and prognathic mandible with horizontal growth pattern. Maxillary central incisors were both protruded and proclined whereas mandibular central incisors were retroclined.

Considering the extent of skeletal discrepancy, amount of reverse overjet and chief complaint, the treatment plan to correct the skeletal class III malocclusion by doing Orthodontic treatment initially followed by mandibular set back surgery later (FOSLA) was made. With the aim of achieving facial aesthetics and optimal functional occlusion, surgical treatment was planned. The objective was to achieve ideal occlusal relationships, in terms of canine class, molar relationship, overjet, overbite, and matching dental midlines.4

Prediction of the final outcome was done using predictive tracing by both manual and computerized methods.5, 6 The value for mandibular set back as predicted using both the methods was 5 mm. Following this, a model mock surgery was done for visualizing 3-dimensional post-operative relationship of jaws with positive overjet and class I molar relation []Figure 4 . The surgical stent was made at this position.

Surgery was performed with the support of oral & maxillofacial surgeons. Retromolar area was exposed, bilateral sagittal split osteotomy with short lingual split was done using surgical burs. Medial pterygoid muscle was detached after performing the split, 5 mm setback was achieved and rigid fixation was placed in the mandible through the use of four-hole miniplates on both sides [Figure 5]. To keep the mandible in the correct position, the use of intermaxillary elastics for 30 days were given to achieve maximum stability. The patient was under observation after the procedure and was guided subsequently to perform opening and lateral movements. Active orthodontic treatment was resumed four weeks after surgery. Class III and settling elastics were given. Six months later, fixed appliances were removed and a retention appliance was delivered [Figure 6]. 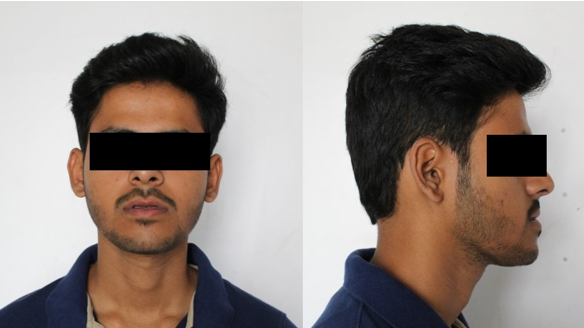 Showing the orthodontic compensation before surgery 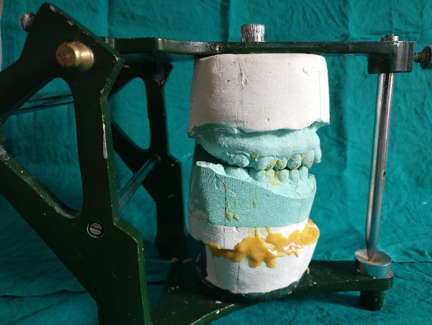 Showing the setback of 5 mm 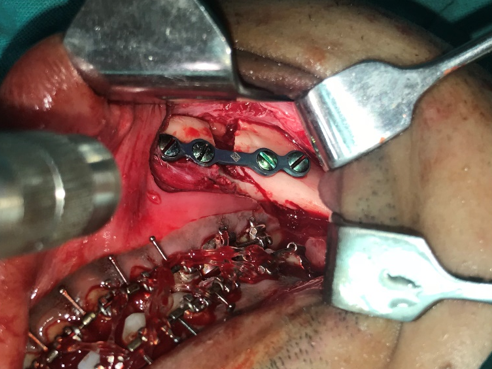 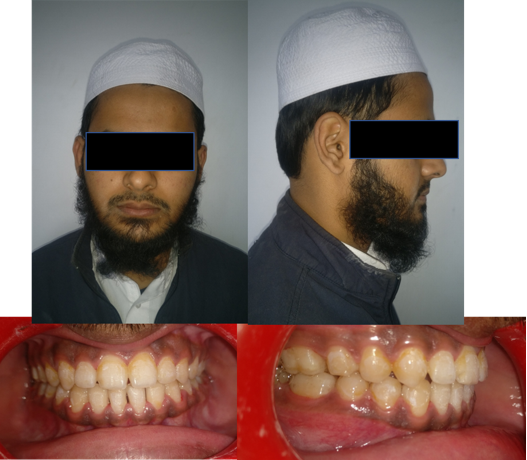 When the skeletal or dentoalveolar deformity is so severe that the magnitude of the problem lies outside the envelop of possible correction by Orthodontics alone and even the camouflage is also not the option then Orthognathic surgery is the best plan. 4

This case report describes the treatment of a boy with dental and skeletal class III relationships. In this case ortho- surgical treatment was the best option for achieving good esthetic result and an acceptable occlusion. Presurgical orthodontics involves removal of all the dental compensations and also suggests the extent of skeletal discrepancy. 1 With osteotomy and setback of the prognathic mandible, normal skeletal base relationship is achieved. Postsurgical orthodontics involves the normal occlusal rehabilitation.

A careful prediction and treatment planning are mandatory prior to planning for an Orthognathic case. A multidisciplinary team approach ensures a satisfactory and acceptable outcome.

The author declares that they do not have any conflict of interests.