Dental study models are essential records for orthodontic diagnosis, planning and treatment evaluations. As plaster models are prone to damage and loss, require storage space and inefficient to retrieve and transfer, digital models are been used to eliminate drawbacks of plaster model regarded as potential replacement of traditional plaster models.

Materials and Methods: CBCT and plaster models will be prepared from 12 patients. Rubber base impressions will be scanned using 3D dental laser scanner. Landmarks will be marked and the linear measurements of all the three models will be compared using 3D software.

Conclusion: Plaster models, CBCT models and models obtained from laser scan of impressions are three different diagnostic records. Each have their own advantages and disadvantages. The present study shows that models obtained from laser scanned impressions are comparable to plaster models. The accuracy is adequate for initial diagnosis and treatment planning in clinical orthodontics

Orthodontic study models are essential diagnostic record which is accurate plaster reproduction of teeth & supporting structures. Study models provide a three-dimensional view of occlusion enabling visualization and aids inaccurate measurements to be made in the dental arch. It is used to classify malocclusion and formulate a treatment plan. Although traditional plaster study models have been used for many years, they have many limitations. Often and continued use and any mishandling with these models can lead to their wear off or even breakages, decreasing accuracy and increasing the likelihood of fracture. Also, the storage of plaster study models requires a huge stockroom, which might not be affordable in all clinical setups. Hence many clinicians either do not opt for taking study models or if taken do not store them for a longer period. These records must be preserved for a minimum period of three years from the date of commencement of the treatment in a format determined by the Council or accepted as a standard mode of documentation.1

To address the storage and maintenance fallout with plaster study models, Orthodontists may be required to convert all their treatment records to digital form. Recent advancements in technology have allowed the generation of digital study models where three-dimensional images of models can be analyzed on computer software. This area of digital dentistry helps to improve efficiency and maximize treatment outcomes.2

In this digital world, the introduction of e-models or digital models has substituted the traditional plaster models overcoming the storage and maintenance problem.3 Reviewing the advantages of the digital models, their accuracy and reliability need to be assessed and compared with traditional gold standard plaster study models frames the basis for the need of our study.

With this background in mind, this study was aimed to analyze and statistically compare linear measurements of plaster models with digital models obtained from CBCT of a patient as well as with laser-scanned rubber base impression of a patient.

12 Patients reporting to the Department of Orthodontics from age group ranging from 18-30 years were selected for the study.

The inclusion criteria were - 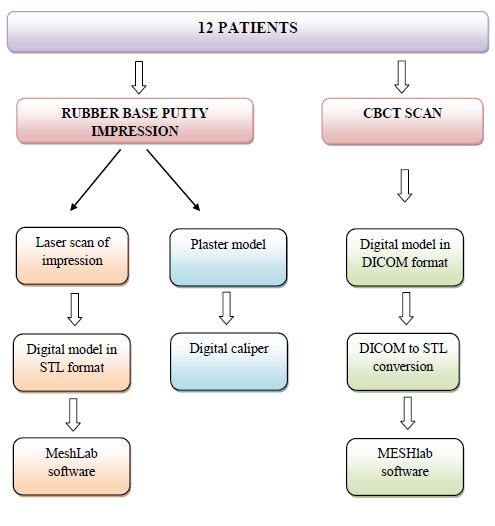 For clinical data collection, tray sizes were selected and impressions using DMG Honigum, a light body addition Silicone putty impression material was taken of the maxillary and mandibular arch. The selected impressions were disinfected with 2% glutaraldehyde; labeled and wrapped in a plastic bag and delivered to the laboratory for the scanning process. After making impressions, on the same day patient was sent for a CBCT scan for diagnosis and to derive a digital model. Impressions were scanned with dental scanner Medit Identica blue, Seoul, Korea of 1.3-megapixel twin camera. Post scanning, the impressions were poured in Orthokal for preparation of study models. 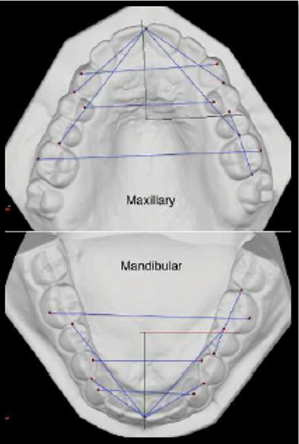 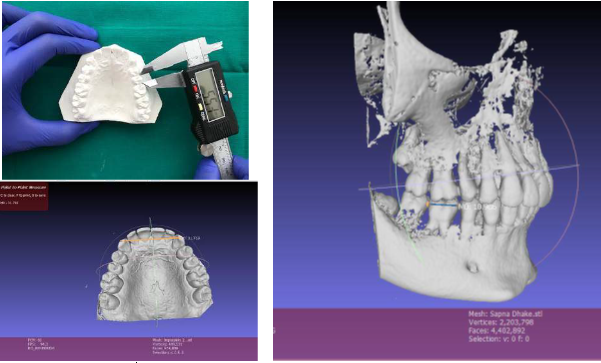 landmarks & measurements used in the study

The mean value for the mesiodistal width of ‘Mandibular Premolar' using CBCT is 7.24±0.53, using the laser is 7.21±0.32, and of plaster model is 6.86±0.28. The P-value for mesiodistal width of ‘Mandibular Premolar’ is 0.043 which is statistically significant. The average Mean standard Deviation ranged from 0.42 to 3.30, amongst all the parameters. The highest mean difference of 0.982 was observed with measurements of mandibular molars, in Mandibular Arch width. There is no obvious pattern in the results and the differences are small. All the other parameters were statistically Non-Significant.

In the CBCT model measurements, Maxillary canine measurement had the least error with 0.049, whereas measuring the midline to 13 distal incorporated maximum error in repeated measurements.

The intraclass correlation coefficient was done to assess the reliability of the measurements amongst the groups; Digital model of CBCT, impression scanned laser models, and plaster models. Though few parameters showed the least correlation values, these were yet with 'Near Complete Agreement. Thus it can be considered reliable.

For many decades, plaster models have been the only way to accurately visualize and evaluate a patient's occlusion. However, plaster models are well known for being susceptible to breakage or fracture and difficulty in their storage, retrieval, transportation, and their use in telecommunication.4 Recently, the advancement of imaging and computer technology has introduced digital 3D models to the orthodontic specialty, which has overcome the limitations of traditional plaster models. With several competing modalities currently available, some authors have suggested that the profession should determine the best alternative to traditional plaster models.5

In the present study, plaster models were chosen as the reference standard, although direct measurements on plaster models are inevitably associated with some degree of inaccuracy. We preferred to simulate the clinical situation where the practitioner routinely uses a caliper to perform direct measurements in the orthodontic office. Measurements made either manually on plaster models or digitally on a computer are subject to inter-examiner variability. Manual measurements with a digital caliper depend on the positioning of the ends of the caliper on the plaster model. For digital measurements, the examiner must indicate on a computer screen the 2 points to be connected as the tooth width. Although the examiner can rotate the digital model on the screen to accurately choose the 2 points that reflect the tooth width, the image is still 2-dimensional, even though the digital model is a real 3D model. The identification of points, axes, inclinations, and planes becomes more complicated and less reliable with 2-dimensional images. Interpretation and identification of landmarks are more difficult and somewhat subjective when using 2- dimensional images to calculate arch length.8

The mean differences calculated amongst all the three methods were statistically evaluated as significant if the values were less than 0.05. In our study, the mean differences with ‘Mesio-distal width of Maxillary Premolar’, ‘Mesio-distal width of Mandibular Premolar' and in the measurement of mandibular arch length, the values of ‘Midline to canine distal surface’ were found to be “Clinically Significant”.

Results of the statistical analysis done, suggests that the discrepancy between the measurements acquired from digital models derived from CBCT and laser scan of impression, compared to the plaster models is sufficiently low. These differences do not make any difference in diagnostic purposes and are clinically acceptable. Schirmer and Wiltshire regarded a measurement difference between alternative measurement methods of less than 0.20 mm as clinically acceptable10 which is in accordance of our study. The reliability of measuring the mesiodital width of teeth on all three methods is clinically acceptable; this is consistent with the previous studies done by Stevens et al,11 Quimby et al,8 Luu et al12 and Naidu et al.13

In summary, the selection of the diagnostic record method by the clinician will ultimately depend heavily both on the clinical situation and economic factors. This study has presented a novel method of digitally recording study model data, offering the profession a valid alternative to the use of conventional plaster models and the potential to significantly reduce the burden of model storage.

From the analysis and discussion of results following conclusions can be drawn from this study:

It seems reasonable to conclude that our objective of comparing accuracy and reliability of linear measurements on digital models derived from a laser scan of impressions and CBCT scan of a patient with plaster models is achieved where plaster models will be very soon obsolete and revolutionized by digital models.