Case Report: This case report describes the management of class II malocclusion in an 18 year old female patient using “Forsus” fixed functional appliance system to correct her class II malocclusion. The patient was well beyond her growing years, hence the fixed functional appliance bought more of dento-alveolar changes rather than much of skeletal changes. This appliance has several advantages, as it is an operator handled device and the patient cannot remove it. It acts on the teeth and jaws for 24 hours a day, patient compliance is not a problem, and hence treatment duration is shorter.

Conclusion: The profile changes and treatment results were demonstrated. This case report illustrates that, fixed functional appliances have a significant role in the management of class II malocclusion by not only promoting growth modulation, but also encouraging dento-alveolar changes once growth has completed. Both growth modulation and dento-alveolar correction minimizes the necessity of extraction of permanent teeth and probably orthognathic surgery. With proper case selection and good patient cooperation, we can obtain a significant result with the Forsus Fixed appliance.

Clinical significance: Fixed functional appliances have a significant role in the management of class II malocclusion. It eliminates the massive compliance needed in removable fixed appliance therapy. Nonetheless, the growth modulation minimizes the necessity of extraction of permanent teeth and probably orthognathic surgery.

Forsus fixed functional appliance is very effective in patients in whom growth has either completed or is either on the verge of completion. The successful use of this appliance in the treatment of skeletal Class II malocclusion is based upon factors such as; age of patient, compliance of the patient and other case selection criteria. Dentofacial orthopedic treatment can significantly alter and improve facial appearance in addition to correcting irregularity of the teeth. Functional appliances may be defined as orthodontic appliances that use the forces generated by the muscles to achieve dental and skeletal changes.1, 2 These appliances have been used in clinical orthodontics for a long time and are extensively featured in the literature.3, 4 Their effect is produced from the forces generated by the stretching of the muscles.5 It is a commonly used functional appliance partly due to its acceptability by patients (Chadwick et al., 1998).6 The muscles and soft tissues are stretched with the generated pressure transmitted to the skeletal and dental structures potentially resulting in skeletal growth modification and tooth movement 6 Management of class II malocclusion by growth modulation in adolescent patients is one of the most debated topics in orthodontics. Lack of compliance in adolescent population has been a major concern of healthcare providers. Every orthodontist appreciates the seriousness of compliance.

Noncompliance has been a major concern for orthodontists since more than 40 years.7 However, predicting compliance before treatment may be difficult. Fixed appliance for class II correction requires minimal patient cooperation and they can be grouped into three categories based upon their mode of action.8

Management of class II malocclusion has wide spectrum of options. Since this patient presented with completed growth, it was decided to treat her with Forsus Fixed appliance therapy which promoted major dento-alveolar changes and minor but definite skeletal changes as well. We could not use a rigid fixed functional appliance viz herbst, as we do not have the laboratory facility to fabricate herbst appliance. Hence, we decided to use flexible fixed functional appliance - Forsus.

Intraoral examination on frontal view shows presence of a deep overbite, on side view the patient shows the presence of Class II div 1 incisor relationship, an end on canine relationship on both sides and an end on molar relationship on left side. Molar relation on right side was Class I. Patient has an overjet of 7 mm and an overbite of 5mm. There is spacing in upper anterior region and moderate crowding in lower anterior region. The upper and lower arch shows the presence of a “U” shaped arch form. OPG of the patient shows presence of all four 3rd molars in a developing stage. Lateral cephalogram is clearly indicative of a proclined upper and lower anterior teeth and a recessive lower jaw. 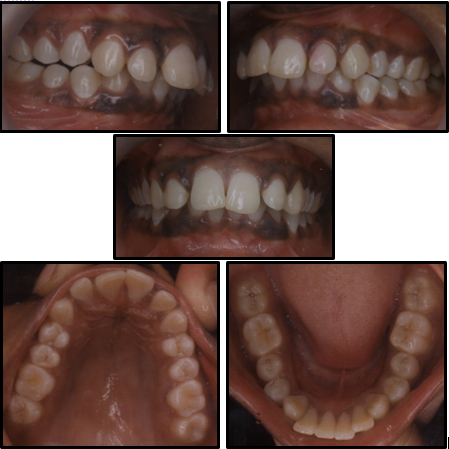 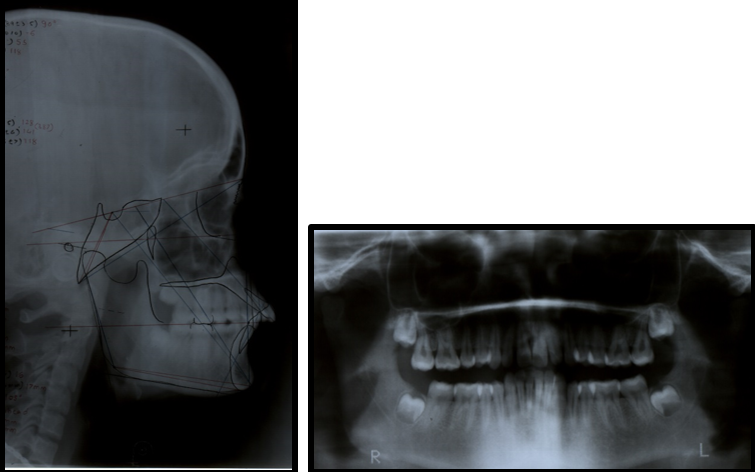 To change the class II relation to class I without any premolar extraction, it was decided to treat this patient with fixed functional appliance Forsus (3M Unitek) in conjunction with preadjusted edgewise appliance in single phase. A 0.022" slot MBT prescription was used. 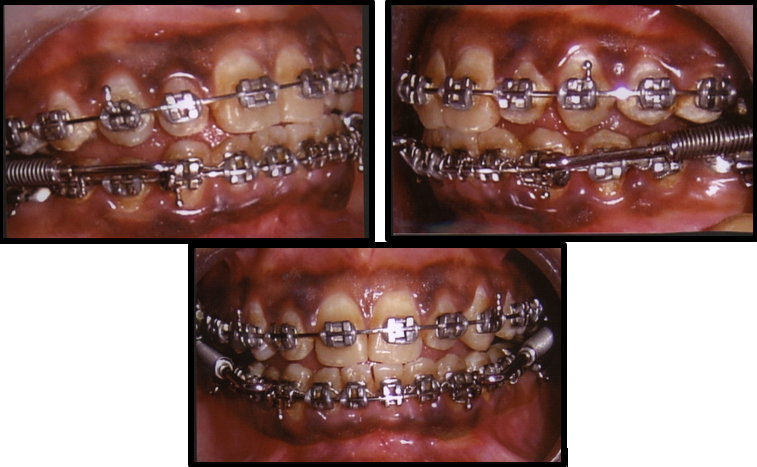 Treatment alternatives included either fixed Twinblock appliance therapy, Extraction of maxillary premolars with fixed appliance therapy or Orthognathic surgery. Option of fixed Twinblock was eliminated as the patient was already well beyond her growing age. Moreover the excessive bulk of the appliance was the reason why it wasn’t chosen. Extraction of upper premolars and ending the case in a Class II molar relation could be another option to improve the excessive display of upper anterior teeth, however this option was also eliminated because the fault was in the mandible, not maxilla and on VTO the patient showed improved profile and reduced prominence of upper front teeth, hence we decided to not extract the maxillary first premolars and treat the patient with a non- extraction protocol. Orthognathic surgery was the third and best option, however the patient refused it, so we decided to treat the case with Forsus Fixed appliance therapy which bought about more of dentoalveolar changes and less of skeletal changes given the patients age. The patient was informed about the compromised results as surgery was the best option in her case.

After complete banding and bonding, leveling and aligning were done in both the upper and lower arch with 0.012”, 0.014”, 0.016”, 0.018”, 0.020” NiTi arch wires following sequence ‘A’ of MBT. After 6 months of alignment and leveling NiTi round wires were discontinued. Reverse curve of spee in the lower arch and exaggerated curve of spee in the upper arch was incorporated in the heavy archwires to prevent the excessive bite deepening during retraction process and also to maintain the normal overjet and overbite. Individually both the arches were consolidated from molar to molar with figure of eight ligature tie and active bend back was placed in the archwire distal to the molar tube. Additional labial root torque was built into the anterior segment of lower archwire. The duration of pre-functional phase of treatment was 6 months. Then Forsus appliance was inserted. After two visits, a crimp was added for activation on left side of Forsus appliance for increased sagittal correction on left side and also for midline correction. Forsus was used for 12 months, a little longer than usual recommended duration. The occlusion was slightly overcorrected to class I, then Forsus was removed. Final finishing and detailing of occlusion were done which took about 4 months of time. Finally light settling elastics were given with rectangular steel wires in lower arch and 0.012” light NiTi wire in upper arch for settling, finishing, detailing and proper intercuspation. 9 After 18 months of treatment, the fixed appliance was debonded, a fixed lingual bonded retainer was bonded in the lower anterior region and wrap around retainer was fabricated for the upper arch. 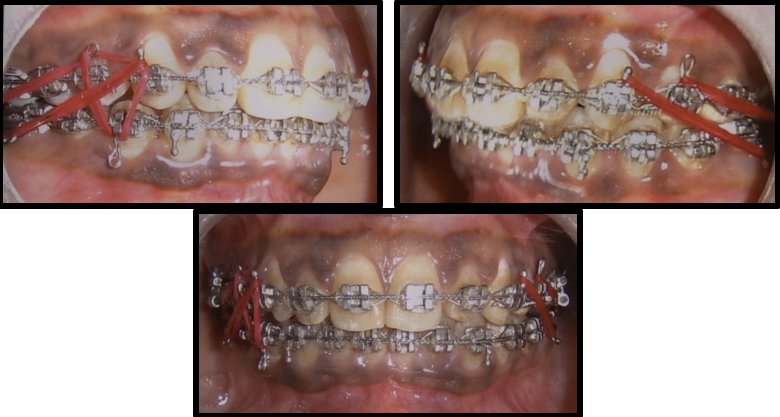 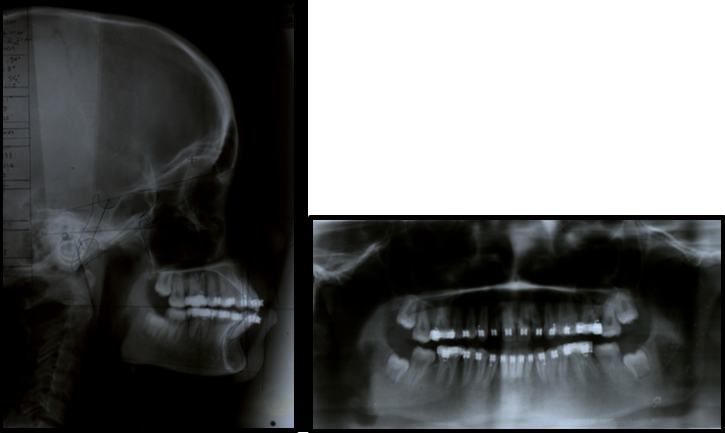 All of the original treatment objectives were achieved. The retrognathic mandible was changed to be more Orthognathic. The excessive display of upper anterior teeth was reduced. Spacing in the upper arch was closed and crowding in mandibular anterior teeth was unraveled The maxillary and mandibular arches were well aligned and coordinated without midline deviations. Normal overbite and overjet was achieved. Class I incisor relationship was achieved and Class I canine and molar relationship was achieved bilaterally. The chief complaint of forwardly placed upper front teeth and backwardly placed lower jaw was addressed. Lips changed from being incompetent to competent and lip strain reduced significantly at the end of treatment. Patient had a pleasant smile and a pleasant profile at the end of the treatment which continued over 18 months.

Class II malocclusion might have any number of a combination of the skeletal and dental component. Hence, identifying and understanding the etiology and expression of Class II malocclusion and identifying differential diagnosis is helpful for its correction Fixed functional appliances have several well established advantages including the fact that it is well tolerated by patients and it can be used in the permanent dentition10. There are potential disadvantages such as the proclination of the lower incisors and development of posterior open bites. In this case, the treatment objectives were achieved largely due to good patient compliance. The patient's chief complaint was forwardly placed upper front teeth and a backwardly placed lower jaw. The selection of functional appliances is dependent upon several factors which can be categorized into patient factors, such as age and compliance, and clinical factors, such as preference/familiarity and laboratory facilities. The Forsus fixed functional appliance therapy resulted in an improvement in the patient's profile. It has been proved in the literature that fixed functional appliances do not produce long-term skeletal changes and most of their effects are dentoalveloar. 10 Pancherz 11 has emphasized the importance of good post treatment intercuspation for preventing the dental and skeletal relapse of class II correction. Teeth locked in stable class I intercuspation are more likely to transfer maxillary growth forces to mandible. 11 Bacetti 12 suggests that growth modulation done after the peak of growth spurt/decelerating phase of active growth spurt, results in greater skeletal contribution to molar correction. The following changes were seen with this single phase treatment using fixed orthodontic appliance and Forsus: ANB angle was reduced from 5 to 1°. Upper incisor inclination with respect to palatal plane was reduced from 120 to 107°.Upper incisor to NA angular value reduced from 35 degrees to 29 degrees and lower incisor to NB value reduced from 30 degrees to 24 degrees. The same value in millimeters reduced from 8mm to 2mm in maxillary arch and from 5mm to 2mm in mandibular arch. Maxillomandibular plane angle was not significantly altered. Overjet was reduced from 7 to 2 mm and Overbite reduced from 5mm to 2mm. Occlusion was changed from Angle’s class II division 1 to normal class I occlusion. Convexity of facial profile was reduced. Successful results were obtained after the Forsus fixed functional therapy within 12 months of time. The overall treatment time was 18 months. After this active treatment phase, the profile of this 18 year 4 months old female patient improved significantly as seen in the post treatment Extra-oral photographs. 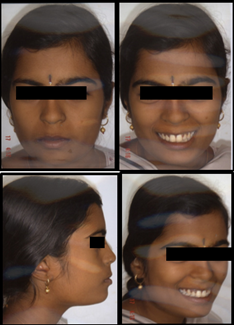 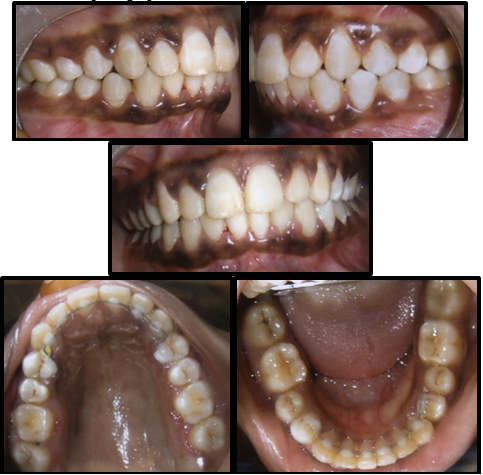 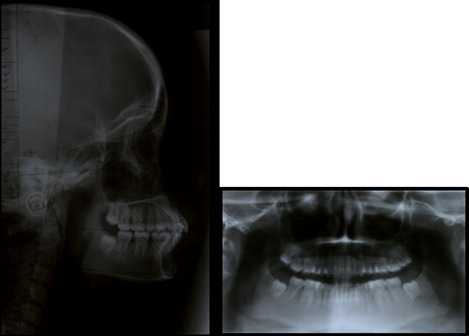