Lishoy, Priyal, Jamenis, Jawale, and Mahajan: A survey to assess the knowledge and attitude of adults from the age group of 18 to 35 Years towards comprehensive orthodontic treatment - A questionnaire based study on adult orthodontics

Introduction: Facial appearance has proved to play a key role in social and psychosocial settings. With the advances in Orthodontics, patients have become more aware about the possibility of correcting malocclusions via Braces. Adults however, face some roadblocks before making a confident decision. Understanding these concerns would help provide optimum treatment to such patients.

Aim: To assess the knowledge and attitude of Adult patients towards Orthodontic treatment

Conclusion: This survey based questionnaire helped in assessing the attitude of the general adult population towards adult Orthodontic treatment as a whole. It concluded that age is not a barrier in today’s times for getting orthodontic treatment done. Moreover, Adult Orthodontics not only improved the function, but also the Aesthetics and Self Esteem of the Adult patient undergoing treatment thus eliminating the earlier notion that Braces can be worn only up till a particular age. Prolonged treatment time was one of the causes of reluctance in many participants; however, the other benefits outweighed the time related inconvenience caused by orthodontic treatment.

Orthodontics is a widely sought out treatment branch today. Good facial aesthetics boosts self -esteem and confidence when interacting with peers. Misaligned teeth have the potential of seriously affecting facial aesthetics. The benefits of orthodontic treatment outweigh the inconvenience caused by the procedure by such a large margin that adults have been readily seeking the treatment. Malocclusion in adults can be a result of deteriorating periodontal health as well. Periodontitis can lead to mobility of teeth and consequent drifting. While periodontal procedures can successfully treat the gingiva, orthodontics is needed to align the teeth in the most favorable positions. Hence, interdisciplinary treatment yields better results.

With increasing need of Orthodontic treatment in adults and increased awareness, several roadblocks have been observed. These roadblocks pertain to the patient’s financial conditions, length of the treatment time, fear or failure of treatment etc. Evaluation of such parameters is required to better understand such patients and devise treatment plans, keeping these concerns in mind. Knowing patients expectations regarding treatment in order to adapt them to the real therapeutic possibilities, considerably increases the chances of satisfaction with the final results.1

There are some distinct differences between orthodontics for the adult and for the child. There are psychosocial aspects that must be considered as well as the physiological parameters while treating adults. The psychosocial aspects include the reaction of others to the patient and the patient's reaction to himself, namely self-image. Facial esthetics is an important determinant of self and social perceptions.2 Information about the limitations and possibilities of orthodontic treatment, which may differ from those of younger patients, should be provided to these patients.3 This, in turn, requires accurate estimation of the patients’ perceptions toward treatment.3 Therefore, it is necessary to investigate the motivation of patients for seeking orthodontic treatment and to analyze the barriers preventing them from starting orthodontic treatment according to different age groups. According to Mahajan M et al, on assessing different factors which motivated adults to seek orthodontic treatment, most of the patients realized the need for the orthodontic treatment in adult age only followed by the fact that adult patients were mostly unhappy about their dental appearance in perception of their smile before treatment which motivated them to seek treatment at this age.2 Kim Y et al found that the middle-aged had a relatively high percentage of interest (above 45%) in orthodontic treatment. However, demographic characteristics were not significantly associated with the positive interest. These results highlighted the need for educating the middle-aged about the limitations and possibilities of orthodontic treatment to increase its acceptance.3 Tayer et al concluded that the negative concerns and fears the patients had about their course of treatment were soon dissipated. Perseverance toward the treatment goal was an overriding characteristic of every patient, and satisfaction with the end result was uniformly favorable. These patients would encourage all others to undergo treatment if it was required.4

This questionnaire based survey has been designed to evaluate the attitude of adults towards orthodontic treatment and assess the level of motivation amongst various patients towards Adult Orthodontics.

To assess the knowledge and attitude of Adult patients towards Orthodontic treatment.

A cross sectional study was conducted over duration of 3 months. An online questionnaire was prepared using Google forms. Appropriate permission was taken from the Scientific Advisory committee and Institutional ethics committee.

The sample size (with finite population correction) is equal to 138

A Google form of the questionnaire was created to assess the attitude of adults towards orthodontic treatment. The questionnaire along with a brief synopsis explaining the aims and objectives of the study was sent to the relevant ethical clearance committees.

After receiving clearance from the Scientific Advisory Committee and the Institutional Ethics Committee, the questionnaire was circulated amongst the participants.

After some questions about the informed consent, gender and age the following questions were asked:

The results of this questionnaire based survey highlighted certain key features: 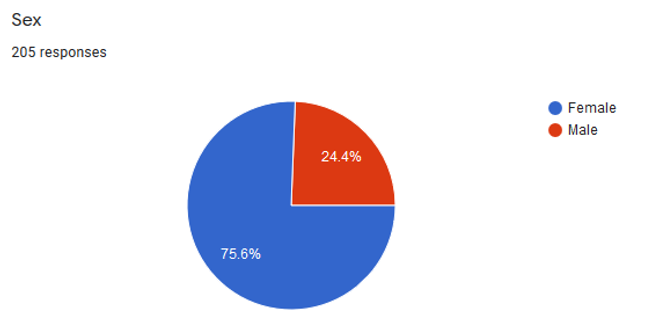 Female responses were more than males and this could be correlated either to the increased awareness of orthodontic treatment in females or increased demands of facial esthetics by females more than males. Women are more concerned with beauty and have a better perception of treatment need as well as esthetic results. 5, 6, 7, 8, 9, 10, 11 This fact explains why, even in random samples such as in our study, there is a prevalence of females. 12, 13, 7, 8, 10, 14, 15, 11

Patients with history of braces

What age did you get your orthodontic treatment done?

Majority of patients who underwent orthodontic treatment started the treatment at approximately the age of 16 years, however in this study all the participants were above the age of 18 years. This can be correlated to the age during which complete permanent dentition teeth eruption has taken place. This can also be correlated to the age wherein teenagers are at the peak of puberty and just entering the adulthood phase during which esthetics becomes of prime concern. The mature patient is very worried about how he or she looks and would be very cooperative towards any measures taken to improve the way they look as they believe this might change their quality of life.

What motivated you to get your treatment done?

Hence according to statistics, these age groups of patients were self-motivated to undergo Orthodontic treatment and hence very cooperative towards the entire phase of treatment. The psychological benefits for adult patients in need of oral rehabilitation may occur because of the motivation obtained by the improved occlusion and smile esthetics that they see and observe among their peers and people they are socially around with, who are undergoing or have undergone treatment in the past.

Do you feel that orthodontic treatment has improved your self esteem and quality of life?

The patients did believe that braces treatment did improve their quality of life and Self Esteem. Esthetic reasons alone justify treatment, not only because it almost always results in a better patient self-image, 16 but also because patients value esthetic and psychological benefits more than functional and dental health improvements. 17, 18 The perception of esthetics differs between person to person. 16 Some people with severe malocclusion do not report a negative impact, while others with mild irregularities cited major impacts on their QoL

Do you feel age is a barrier in getting orthodontic treatment done?

Would you recommend orthodontic treatment to other people of your age?

If you hadn’t undergone treatment in the past, would you be willing to get treatment now at your current age?

Participants were willing to undergo orthodontic treatment at their current age had they not have undergone it in the past, which again was suggestive of their positive attitude towards adult orthodontics. This also suggested that they believed that orthodontics could be carried out at any time in life and age was not a barrier.

Patients with history of braces

Do you think you should have undergone treatment when you were younger?

Do you feel it is too late to undergo orthodontic treatment

Would you willing to get braced?

What would be your reason for getting braces?

Do you increased age is a barrier in undergoing orthodontic treatment?

Are you worried that the appearance of the braces would affect you socially?

Do you feel that braces treatment will boost your confidence?

Patients not willing to get braces treatment done

Do you feel increased age is a barrier in undergoing orthodontic treatment?

What would be your reason for not getting braces? (select all that apply) 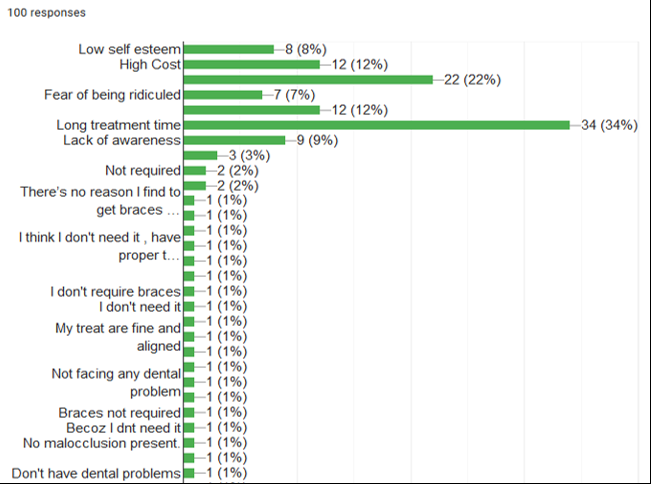 This survey based questionnaire helped in assessing the attitude of the general Adult population towards Comprehensive Adult Orthodontic treatment on a whole. It concluded that age is not a barrier in today’s times for getting orthodontic treatment done. Moreover, Adult Orthodontics not only improved the function, but also the Aesthetics of the Adult patients undergoing treatment. Treatment improved the Quality of life and Self Esteem of the patient. This survey eliminated the earlier notion that Braces could be worn only up till a particular age. Prolonged treatment time was one of the causes of reluctance in many participants; however, the other benefits outweighed the time related inconvenience caused by orthodontic treatment.

Y Kim Study on the perception of orthodontic treatment according to age: A questionnaire survey. Korean J Orthod20174721521

M H Jung An evaluation of self-esteem and quality of life in orthodontic patients: effects of crowding and protrusionAngle Orthod2015858129