Shah: To evaluate stress patterns in the periodontal ligament of maxillary molars when intruded with a mousetrap appliance: A FEM study

To evaluate stress patterns in the periodontal ligament of maxillary molars when intruded with a mousetrap appliance: A FEM study

Materials and Methods: A finite element model of the maxilla and the mousetrap appliance made of 288332 elements and 64771 nodes was generated using software tools like MIMICS and HYPERMESH. A simulated force of 100 grams was applied to the maxillary molar through the appliance and the stress contours were assessed.

Conclusion: It is therefore concluded that the mousetrap appliance which exerts a force within the range of recommended force for molar intrusion generates stress contours around the maxillary molar and in the periodontal ligament of the maxillary molar.

Anterior open bite characterized by an absence of vertical overlap between the maxillary and mandibular incisors, appears to be the most challenging malocclusion in the vertical plane.1 In most of the cases it is treated by extraction of molars or premolars leading to mesialization of the posterior teeth thereby resulting in an anticlockwise rotation of the mandible. Surgical options i.e. Le Fort I osteotomy and mandibular osteotomy are also considered in certain cases. Various other treatment modalities e.g. multiloop edgewise archwires, vertical elastics or extrusion arches are also available for management of such malocclusion. “Mousetrap appliance” is also an effective treatment modality for the correction of an anterior open bite. It uses TADs in the anterior palate to fix a beneplate, along with two lever arms which is connected to two mini-implants. A modified Goshgarian TPA with distal loop is fabricated with sufficient clearance from the palatal mucosa to avoid impingement during and after molar intrusion and also to prevent undesirable tipping of the molars. In the passive form the distal ends of lever arms are present cranial to the center of resistance of the maxillary molars. Activation is performed by pulling the lever arms downward and then connecting them to the molars thereby resulting in a constant intrusive force.2 (Figure 1)

Finite element analysis involves construction of complicated three dimensional models of various tissues possessing characteristic biomechanical properties.3 In the present study, such a model was generated from the Computed Tomography images of human cranium obtained from an X-force/SH spiral CT scan machine. A geometric model was constructed using a software called MIMICS i.e. Materialize Interactive Medical Image Control System which was then converted into FEM model using the modelling tool known as ‘Hypermesh’. 288332 elements and 64771 nodes were used and the material properties assigned to the various parts were acquired from an existing study.4 (Table 1). The boundary conditions were defined by constraining the top portion of the maxillary bone in all directions so that there would be no displacement or stress in that area. An intrusive force of 100 grams was applied to the model through the appliance and the resulting effect was assessed by a finite element software known as ANSYS.

The stress distribution around the maxillary molar 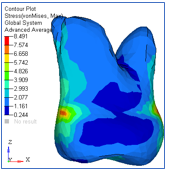 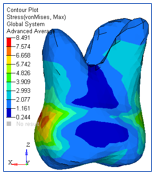 Stress contours in the periodontal ligament 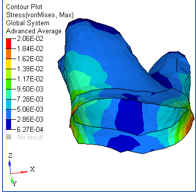 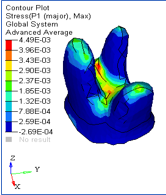 Conversion of mechanical stimulus generated by the orthodontic force into a biological reaction initiates an orthodontic tooth movement. The primary reaction towards application of orthodontic force is altered stress-strain relationship in the periodontal ligament as well as in the surrounding tissues leading to bending of bone and intra alveolar displacement of teeth, provided an optimum force is applied. Some investigators have pointed out that intrusive forces lead to pulpal changes like congestion, circulatory disturbances, vacuolization and fibrohyalinosis.5, 6 Brodin et al concluded that there was a temporary reduction in pulpal blood flow when lateral incisors were intruded with a force of 2N.7 Proffit and Fields suggested that 10-20 grams of force was optimum for carrying out intrusion while as Woodside, Hanson and Berger recommended 50-10grams. Umemori et al suggested that an intrusive force of 500 gms should be applied for molar intrusion while as a force of 90 gms was suggested for growing subjects by Kalra et al.8, 9 Melson and Fiorelli recommended a force of 50 gms buccolingually to intrude maxillary molars in adult subjects.10 Li et al intruded two over erupted molars by using mini-implants and applying a force of 150 grams. They evaluated the root resorption using CBCT and the results showed that the mesiobuccal root of the first molar showed highest root resorption.11 As it is very important for the stress to be within the physiological constraints of the tissues, in the existing literature, authors recommend intrusive forces within the range of 15-200 grams.12 There are innumerable studies on different types of posterior intrusion mechanics, however their biomechanical effects such as stress patterns have not been evaluated in detail.

Choi et al in their Finite element method study observed the Von Mises stresses at the centre of furcation of the first molar roots while Dawer et al recorded it at the palatal root close to the furcation which was about 2.133 MPa i.e. less than that observed in this study.10, 15 Pekhale et al evaluated the stress patterns on the posterior maxillary segment after intrusion with the help of mini-implants by applying a force of 300 grams to each dental segment and found 17.019 N/mm2 of Von Mises stress on the buccal surface of the crown of maxillary first molar.4 In the present study maximum tensile stress was observed at lingual aspect and was around 5.4MPa while as compressive stress was observed at the cervical region and was around 2.28 MPa (Figure 2, Figure 3, Figure 4, Figure 5). Maximum Von Mises stress was observed at lingual aspect and was around 8.49MPa which is more than the values recorded by Dawer et al.10

A force of 100 gram/cm2 (0.01N/mm2) was suggested by Bench et al as the ideal stress for the periodontal ligament which maintains the vascularity and prevents hyalinization.16 Jeon et al emphasized on the consistency of the compression and tension in the periodontium with the load type. Cifter and Sarac found increased stress levels in the apical region of the mesial root of first molar and concluded that these sites are more prone to resorbtion.14 They suggested that appropriate forces should be calculated on the basis of the root surface area. In contrast to the present study Dawar et al observed the lowest Von Mises stress in the periodontal ligament at the furcation region which was around 0.005MPa.10 In the present study maximum tensile stress in the periodontal ligament was observed at furcation region and was around 4.49e-3 MPa (0.00449MPa), and maximum von-mises stress was observed at cervical region on both lingual and buccal side and was around 2.06e-2MPa (0.0206MPa) (Figure 6, Figure 7). The values recorded are more than those observed by Dawer et al.10

Following are the observations of this study

A Stenvik I Mjor Pulp and dentin reactions to experimental tooth intrusion: a histologic study of the initial changesAm J Orthod19705737085