Patel, Bhanat, Patel, and Patel: The relationship of severity of malocclusion as assessed by IOTN and DAI indices with perception of individuals towards orthodontic treatment-A Questionnarie study

Background: The orthodontic objectives are best achieved when the individual is treated as a whole. It is important to understand the perception of individuals towards the orthodontic procedure.

Objectives: The aim was to evaluate the perception and explore the reasons responsible for the patient wanting to undergo orthodontic treatment.

Materials and Methods: A questionnaire survey was done on 150 individuals reporting to Department of Orthodontics, IOTN and DAI indices on same individuals were recorded.

Orthodontic correction plays a major role in alleviating psychological and social handicap by correcting several malocclusive traits.. Crowded, irregular, and protruding teeth have been a problem since antiquity and attempts to correct this disorder go back at least to 1000 BC. Malocclusion has been considered the third highest oral health priority by the World Health Organization.1 Since the state of malocclusion has such critical importance, it is imperative that factors associated with a individual wanting to treat his/her malocclusion should be well understood. Evaluating these factors helps us understand individual’s psychology towards the treatment need and priorities of patient and thus enabling us to provide a “patient statisfactory” treatment.

Orthodontic rehabilation is an elective procedure in most patients. Subjects with severe malocclusion might not feel the need to get the malocclusion corrected while subjects with minimal malocclusion might have a strong desire to get the malocclusion treated. The desire for orthododntic treatment seems to be influenced by various factors such as demographics, ethnicity, economical background, gender and many more.2 Understanding this factors can help the clinician estimate the cooperation during treatment, the prognosis of the case, and posttreatment satisfaction. Orthodontists should recognize this network of interrelations with the aim of achieving a favorable outcome for the patient.

It is famously said that beauty is in the eyes of beholder but it has been attempted to quantify aesthetics in the form of indices such as Dental Aesthetic Index (DAI) given by W.H.O in 1989 and Index Of Orthodontic Treatment Need (IOTN) index ( P.H Brook and W.C Shaw in 1989). The indices associates aesthetic and dental health components mathematically to produce a single score that combines both aspects of occlusion, including patient perceptions.3

Quantifiying a regional population and studying various perception factors of individuals according to severity of malocclusion can help us understand individual’s psychology. This can help us plan treatment protocol, selection of appliance and also in patient counselling when needed. Thus the aim of this study was to explore the perception of individuals regarding awareness of their malocclusion and its correlation with desire for orthodontic treatment using DAI and IOTN index.

A total 150 individuals, were included who were visiting the Department of Orthodontics and Dentofacial Orthopaedics, AMC Dental College, Ahmedabad for the first time. The present questionarrie survey received approval from institutional review board. The survey was conducted using structured questionarrie. Individuals who were willing to participate in the study and who were yet to start orthodontic treatment,18 years and above were included. Mentally challenged and medically compromised patients were excluded. Questionarrie interview was held with every individual irrespective of their age, by a single investigator. The questionnaire consists of 10 questions involving psychosocial aspects of patients including dental awareness, dental satisfaction,effect of dental malocclusion, factors which influence patients in seeking treatment, main reason for seeking treatment and expected social changes once orthodontic therapy is completed. 4 All individuals were examined by a single examiner by using a mouth mirror and a periodontal probe. The questions asked are given below

1) Are you aware of dental malocclusion?

2) Who is the first person to notice your dental malocclusion?

3) Who is the first person to suggest orthodontic treatment?

4) Do you think your self confidence will Improve after orthodontic treatment?

5) Are you expecting good career opportunities after your orthodontic treatment?

6) Do you think your biting and chewing will Improve after orthodontic treatment?

7) Do you have any problem while speaking?

8) Do you think your dental health will Improve after orthodontic treatment?

9) Do you think your facial and dental appearance will Improve after orthodontic treatment?

The IOTN index is a rating system that is used to determine whether individuals qualify for orthodontic treatment. It has two components aesthetic component and dental health component. The dental health component assesess various parameters like overjet, overbite, crossbite, contact point displacement. The Index places patient in five treatment grade from “no treatment need” to “treatment need” that correlate reasonably well with clinucian’s judgement of need for treatment. The dental health component is derived from occlusion and alignement and an aesthetic component derived from comparison of dental appearance to standard photographs. When there was a possibility of categorizing a patient in more than one grade the higher grade was assigned. 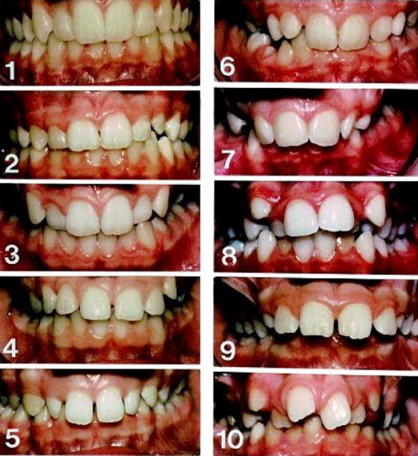 DAI is a rank-ordered on a continous scale to assess severity levels in order to prioritize treatment need. DAI scores have also been found to be significantly associated with the perception of treatment need by individual. 5, 6, 3 It involves evaluation of 10 aesthetic components which were measured. The components of DAI index with its assigned score is given below:

A total of 150 individuals were interviewed for the questionarrie out of which 66 were male and 84 were female. Descriptive data of the study was assessed in tabular and bar graphs.

Esthetic and functional perception of population

Population division for treatment need according to IOTN index

Population division for treatment need according to DAI index

William Osler, a Canadian scientist has quoted “The good physician treats the disease; the great physician treats the patient who has the disease”. To stand true to this quote, it is essential for us to understand complete psychology of patient’s seeking orthodontic treatment and treat them accordingly. Malocclusion can have psychological impact, the intensity of social setback can vary from very little to as much as being socially handicapp. Thus it is imperative that an orthodontist has sound knowledge of patient’s perception and attitude towards the treatment before commencing any procedure.The relationship between professionally assessed and self percieved treatment need is of interest to providers of orthodontic services.7 Understanding the factors involved in demand for orthodontic treatment enables a better planning of resources as well as better assessment of treatment needs and priorities.8

Regardless of severity of malocclusion, the first person to notice malocclusion is the patient itself followed by mother of the patient [Figure 2].The first person to insist for treatment was parents/guardians followed by self motivation [Figure 3] . It is clear that individuals may be the first one to notice malocclusion but it is parents that are keen for treatment. Stejpan Spalj et al 2 found similar results in their study.

Further studies are required to improve our understanding of percieved need for orthodontic treatment, by including parametrs like age, especially in developing countries like India where perception of individuals may differ in rural and urban areas.

This survey was an attempt to evaluate perception of individuals towards orthodontic treatment. It is important that patients are motivated enough to opt for orthodontic treatment despite having less psychological impact. The uptake of orthodontic care may be influenced by awareness, concern for dental appearance, perceived need and DAI score and IOTN score. This survey concludes that:

S Nagarajan K Pushpanjali The relationship of malocclusion as assessed by the Dental Aesthetic Index (DAI) with perceptions of aesthetics, function, speech and treatment needs among 14- to 15-year-old schoolchildren of BangaloreOral Health Prev Dent201082218