Erfan, Rahmani, and Taka: Prevalence of midline diastema according to race in Afghanistan

Prevalence of midline diastema according to race in Afghanistan

Objective: The main aims of this study were to determine the prevalence of Midline Maxillary diastema according to three common races (Tajik, Pashtoon, and Hazara), sex, and type of dental arch among 999 OPD patients in National and Specialized Stomatology Hospital, Kabul-Afghanistan.

Materials and Methods: 999 patients in 15-30 years were selected by a systematic random sampling method during the seventh month. Patients were examined directly intra-orally, and information was collected by a single researcher, recorded on pre-prepared questioner forms, and then data analyzed by the SPSS.25 software.

In Greek, diastema means space, which defines as a space between two or more than two teeth.1 It happens more in the upper arch midline between two central incisors; thus, it's called the central maxilla's diastema line. It's a crucial esthetic concern for most patients and their parents.2 Diastema is shown as a part of natural growth in the mixed dentition period among the children. In most cases, it removes naturally by the natural progress toward maturity of the teeth; thus, it's possible to be continued by the existence of more space (more than 2 mm) or its related cases.3 Edward Angle et al. (1907) define midline diastema as a current form of malocclusion determined by the distance between the upper and lower arches. He also describes the functions and esthetic prognosis of diastema. He said that diastema between teeth always makes an unpleasant appearance, and related to its width, it can disturb speech.4 Also, Andrew (1972), in his classic topic (seven key of ideal occlusion) in fifth law, mentioned there should be no diastema between teeth. The contact area should be tight and support the patient with straight and cute teeth and ideal occlusion. Keene also describes the space more than 0.5mm between central maxillary teeth called midline maxillary diastema.5 In some cultures, especially in Africa, in the past and the present, diastema or space between teeth was one of the cute factor, even some people with different ways make space between their teeth.

In France, call for them the chance teeth. In Australia, people believe that the children with space between their teeth can be rich people in the future.6, 7

Midline diastema in the maxilla is one of the significant problems of beauty. People worldwide and even in third world countries like Afghanistan, who have been suffering from war and poverty for many years, care about their appearance. However, the number of such people is still minimal, but their number is increasing with increasing knowledge and awareness. Unfortunately, due to lack of facilities, scientific resources, and economic problems, there are no evidence-based studies in Afghanistan about the prevalence of maxillary midline diastema, so as a first step, this study was carried out at the National and Specialized Stomatology Hospital, the only specialized center in Afghanistan that It has 200 to 300 OPD patients every day and about 30 to 50 specialists graduate from the specialty program annually. In this hospital, the departments of maxillofacial surgery, periodontology, pediatric dentistry, orthodontics, and prosthodontics are active.

Most popular causes of midline diastema described in following:

This descriptive study was carried out in the OPD department of National and Specialized Hospital, Kabul-Afghanistan, on the 999 patients. The sampling method was systematic random sampling. 999 OPD patients were randomly selected during the seventh month. After carefully direct intra-oral examination of 999 patients with a single researcher, on the dental unit, with adequate light and a dental examination kit and direct vision, the data was conveying to the pre-prepared questionnaire. In the intra-oral examination, the existence of maxillary midline diastema and arch form was detected. The questionnaires' collected data was added to the coding paper and then to the SPSS.25 software and analyzed.

Among 999 OPD patient of National and Specialized Stomatology Hospital, between the range of 15-30 years old from during seventh month from 10/4/2019 to 10/11/2019 on determining prevalence of maxillary midline diastema, and it's related to race, sex, and type of dental arch form, the following results were found that described. 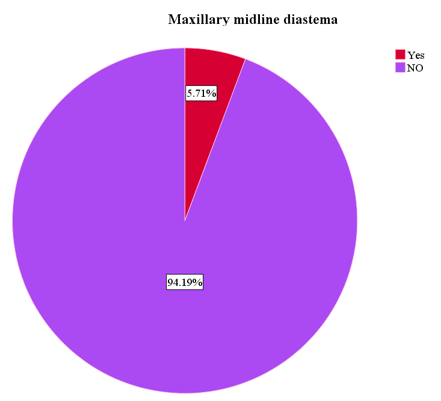 Relation of maxillary midline diastema according to prevalence with its percentage are described. In this study found that in male was 3.3% a little more than female, was 2.5%. 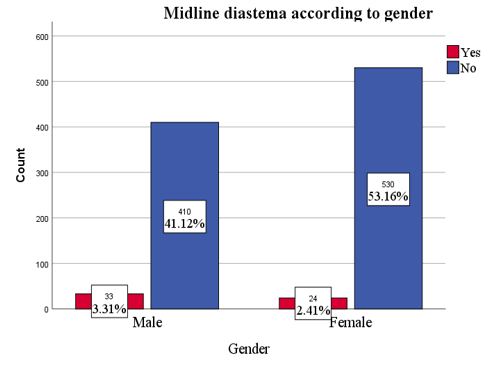 Maxillary midline diastema is more frequent in male than female.

Midline diastema according to race 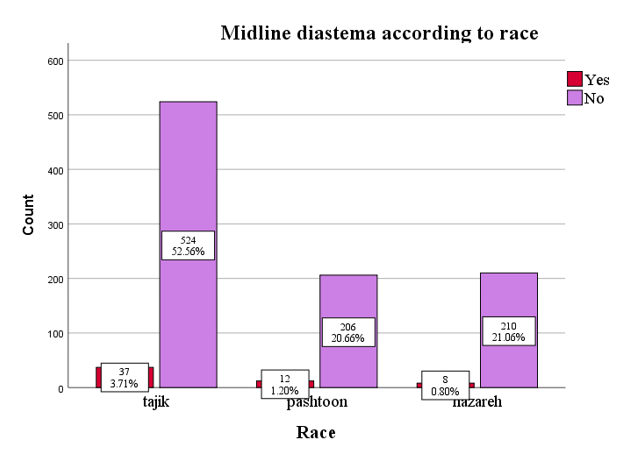 The being of midline maxillary midline diastema and its relation to three common races (Tajik, Pashtoon, Hazara) are described. It shows which diastema more exist in Tajik race than Hazara and Pashtoon. 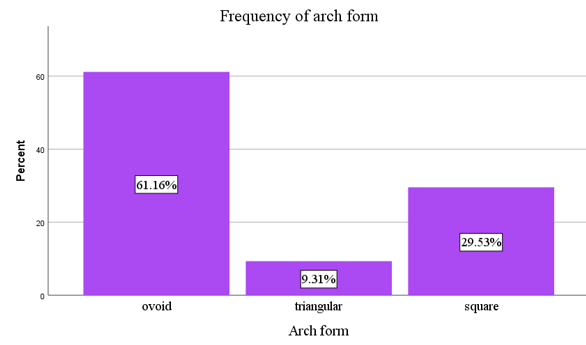 This figure described diastema and its relation to dental arch form. It shows that most frequent arch form is ovoid than square and triangular.

Maxillary midline diastema according to each arch form

About the existence of midline maxillary diastema and its relation to three races (Tajik, Pashtun, Hazara), the result shows that diastema in the Tajik race 65.52% was more than Hazara 13.79% and Pshaton 20.69% existed.

results of this study shows that, maxillary midline diastema in oval arch 3.4% was more than square arch 2% and triangle 0.40%. In a study done about dental arch morphology in School of dentistry of Piracicaba in 2011 among 51 subjects (21/male and 30/female) between 15-19 ages and Caucasian race, the following results found very similar to the finding results in this study. 17

Arch form incidence in School of dentistry of Piracicaba

The research which is done about dental arch morphology in School of dentistry of Piracicaba in 2011. 17

W.-J Huang C J Creath The midline diastema: a review of its etiology and treatmentPediatr Dent199517171

J Weyman The incidence of median diastemata during the eruption of the permanent teeth. Dent Pract Dent Rec196717276