Introduction: Root resorption is the loss of apical root tissue which is implicated by decrease in root-crown ratio. It usually effects from external surface to pulp chamber if not identified in the early stage. Several natural conditions place roots at risk of resorption without any pathology. Knowing the pressure or etiology of the resorption will help the orthodontist in the treatment aspect. To date literature regarding root resorption due to various malocclusions is deplete in Indian population.

Materials and Methods: 90 Patients enrolled for the orthodontic treatment were allocated to three groups - open bite, deep bite & control groups and were subdivided based on nail biting habit. Panoramic radiographs, Periapical radiographs (by paralleling technique) for maxillary incisors (360 teeth) were taken and traced. Length of the root & crown were assessed and root crown ratios were calculated and the results substituted to statistics using SPSS.

Results: Comparison of Root-crown ratios in vertical malocclusions, revealed statistically significant (P < 0.001) differences in Open bite group for all maxillary incisors in both panoramic and periapical radiographs. No statistical significant differences were found in the deep bite group. Significant association was found between nail biting habit and Root-crown ratio. Gender predilection was found to be absent.

Root resorption is one of the dental condition associated with physiologic or pathologic process which could be a compilation if not identified in the early stage. Although most root resorption studies plan to investigate the etiologic factors and predictability of this phenomenon, its origin remain obscure. Philips, Reitan and Shaferet et al enumerated the various factors causing root resorption of permanent teeth: physiologic tooth movement, adjacent impacted tooth pressure, periapical or periodontal inflammation, tooth implantation or replantation, continuous occlusal trauma, tumors or cysts, metabolic or systematic disturbances, local functional or behavioural problems, and idiopathic factors. A study by Uehara, reported that loss of occlusal contact may be responsible for the shortening of roots.1 Studies have shown that patients with open bite malocclusion were at risk, and root resorption was initiated only after the application of orthodontic forces.2 Shortening of the dental roots is a common manifestation of root resorption. Anatomic details like root form and size, heavy masticatory forces, occlusal trauma due to premature contacts and gender have been reported to influence the root resorption.3 Treatment of vertical malocclusions is one of the most challenging, especially in adults. The amount of root resorption depends on various factors of orthodontic treatment, such as degree of force, duration, type of appliance used, and the type of tooth movement. Arntsen noted that root lengths of maxillary incisors were affected in different malocclusions even without orthodontic treatment.4 Parafunctional habits also tend to influence root resorption. Maxillary incisors were reported with a higher incidence of root resorption among all the teeth.5 Root resorption is directly proportional to the root crown ratio, which implicates that a decrease in root crown ratio represents the presence of root resorption.

It was found that the loss of normal occlusal function or OC, leads to root resorption during tooth movement. However, some natural conditions can cause root resorption, even without any pathology. Arntsen noted that root lengths of maxillary incisors were affected in different malocclusions even without orthodontic treatment. Parafunctional habits also tend to influence root resorption. So, radiographs are required before the start of orthodontic treatment for the assessment of dental health, which includes root form and the presence or absence of any underlying aetiology. Periapical views or an upper standard occlusal are recommended to be taken in addition to the dental panoramic tomography when there is a clinical indication, such as pathology or developmental anomaly. Knowing the Etiology of the resorption will help the orthodontist in the treatment aspect. Hence the aim of the study is to assess the root crown ratios of maxillary incisors with vertical malocclusions, deleterious habits, and validate by two different radiographic techniques.

A cross sectional study was conducted to assess the root crown ratio of maxillary incisors. Association between root resorption and gender was also assessed. Permission to conduct the study was obtained and the study was approved by the Institutional Review Board [IRB no VDC/IEC/2014-08] granted by the Ethical Committee, in Vishnu dental college, Andhra Pradesh, India. Before commencing the study, training and calibration was done. A pilot study was conducted to check for the feasibility and relevance of the patients. The sample size estimated based on the previous literature findings and by consulting biostatistician. 90 patients who were enrolled for the orthodontic treatment were included in the study. The subjects were explained about the study prior and informed consent was obtained. Subjects who were willing to participate in the study were included.

The inclusion criteria for the patients were:

Exclusion criteria for all groups include: 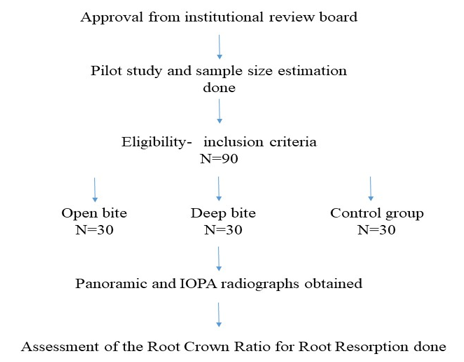 After clinical examination of the subjects, Lateral Cephalographs, panoramic and periapical radiographs (by paralleling technique) for maxillary incisors were obtained. All the radiographs were taken using same radiographic machine by the principal investigator under the same conditions. The magnification was not affected and remained stable because the X-ray machine used for all the radiographs was the same with a magnification of 10%. Lateral Cephalographs were traced for determining the skeletal morphology (Table 1). All the panoramic and periapical radiographs were traced to assess the Root-crown ratio by ‘Method of Lind’.6 A 10X magnification loop with parallax correction and Vernier calipers (Mitutoyo, Japan) was used to measure the root and crown length of all maxillary incisors on the tracing sheet. Outlines of the permanent maxillary incisors were traced against a uniformly lit light box and points like root apex point (a), the cemento-enamel junction (b), and incisal edge point (c) were marked. Three parallel lines were drawn through points a, b, c, as shown in Figure 1. Root length (RL) was measured from the line 'a' to line 'b', and Crown height (C) was measured from line ‘b’ to line ‘c’. Root crown ratio of an individual tooth was computed by dividing the root length by the crown height (RL/C). 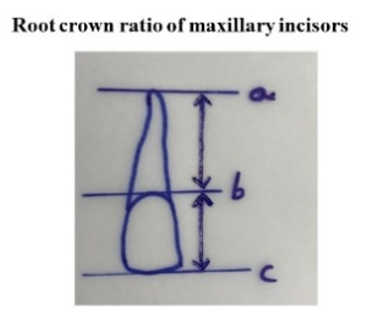 The principal investigator retraced all the radiographs at an interval of 2 months in order to assess reproducibility and reliability of the measurements (intra-examiner variability). Randomly, 10% of the total patient radiographs were selected and retraced to assess the inter-examiner reliability. In order to determine any differences in the measurements, Kappa statistics was applied.

Mean root crown ratio among the groups were compared by using the unpaired t-test. IBM SPSS statistics for windows, Version 21.0Armonk, NY: IBM Corp was used for all the statistical analysis. For all the comparisons, P-value P<0.05 was considered statistically significant. Binary logistic regression analysis was used to assess the association of nail biting habit.

Comparison of Root-crown ratios in vertical malocclusions, revealed statistically significant (P < 0.001) differences in Open bite group for all maxillary incisors in both panoramic and periapical radiographs (Table 2). In contrast, the deep bite group, there were no statistically significant (P < 0.05) differences in the root crown ratio in either radiographs (Table 3). Regarding the nail biters, Odds ratio is 2.762 implicates that every unit increase in crown root ratio, the probability of not having the habit increases by 2.762 times. It was also noted that there was no significant (P < 0.05) difference in mean root crown ratio assessed by panoramic (1.46+0.28) and periapical radiographs (1.40+0.22). From Kappa statistics we found that, intra-examiner reliability and inter-examiner reliability showed perfect agreement with values of 0.86 and 0.80 respectively

Cephalometric measurements for all groups

The present study assessed the associations between root resorption and various vertical malocclusion characteristics. The decrease in root crown ratio represents root resorption. People with open bite exhibited decreased root crown ratios compared to the control group even before orthodontic treatment. The reason for root resorption in open bite patients could be due to associated tongue thrusting habit, which continually produces detrimental forces on developing dentition. Various studies also demonstrated that the presence of open bite posed to be a severe risk factor for root resorption by considering their results before and after orthodontic treatment when compared to the controls.7

Massler et al. reported that root resorption is directly correlated to the age of the individual and progresses with age.9 So, the present study included patients age less than 35 years and greater than 12 years because complete root formation of maxillary lateral incisors takes place by 12 years. Arntsen assessed root resorption from profile radiographs. However, there could be possible uncertainty in the location of the root tip of maxillary incisors accurately in the Lateral Cephalographs. So, our study assessed the root resorption in both panoramic radiographs and periapical radiographs obtained with the paralleling technique. Average of means as represented in Tables-I, II, III showed no difference between two radiographic techniques. Also, to overcome the radiographic variability, root crown ratios were chosen instead of linear measurements like root length because ratios were unaffected by proportional radiographic changes.10 The findings of this study are deemed significant for the diagnosis and treatment of orthodontics. As various studies dictate that root resorption depends on the type, technique, and force levels of orthodontic treatment.11, 12 Open bite malocclusion can, therefore, be considered a risk factor for root resorption, and should be thoroughly evaluated before orthodontic treatment. Diagnostic aids such as 3D imaging techniques like Computed tomography, Cone-beam computed tomography are more likely to help for detecting the resorption lacunae.

S Uehara A Maeda H Tomonari S Miyawaki Relationships between the root-crown ratio and the loss of occlusal contact and high mandibular plane angle in patients with open biteAngle Orthod 2013831364210.2319/042412-341.1

M Mavragani A radiographic comparison of apical root resorption after orthodontic treatment with a standard edgewise and a straight-wire edgewise techniqueEur J Orthod20002266657410.1093/ejo/22.6.665